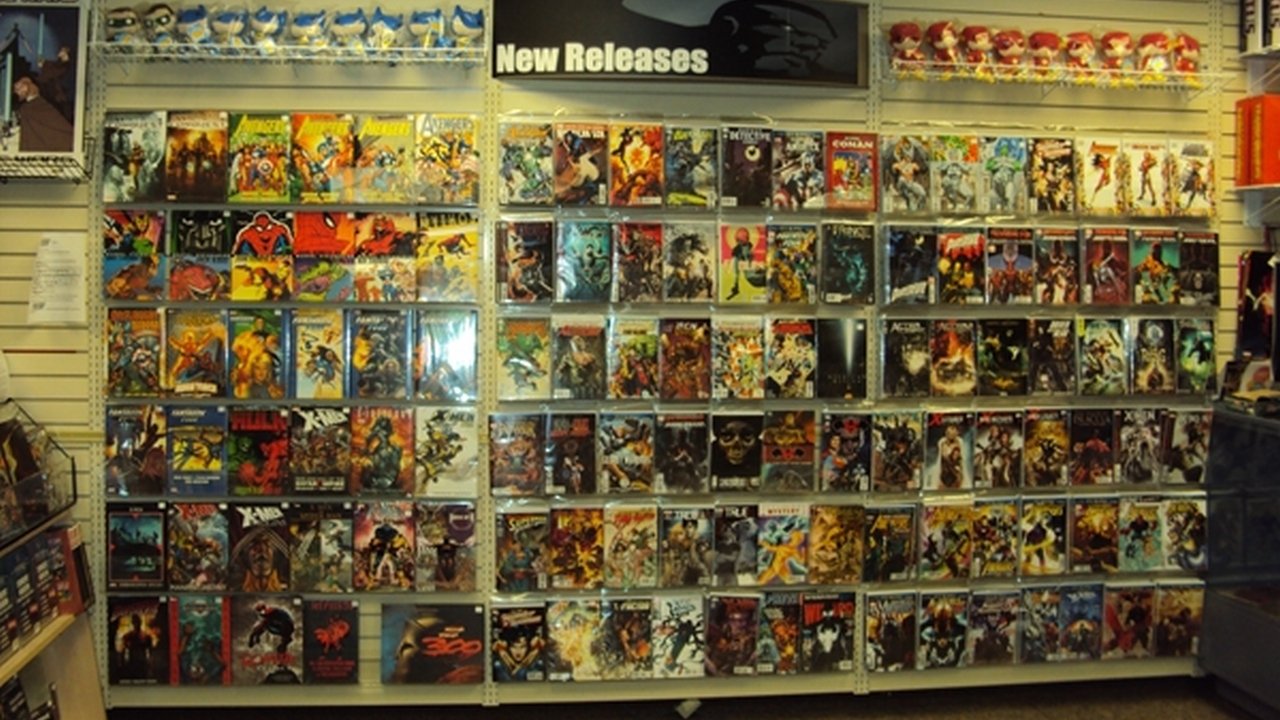 If you were to enter Heroes World on any given day, you’d likely find a scattered group of people bonding over the latest comic releases or recently ordered board games. Somewhere behind the counter you’ll find Andre or Jon (most often both), manning the cash register and debating their latest favourites with customers. Although entering an independent hobby store can often be intimidating to a newcomer, the atmosphere at Heroes World is relaxed and welcoming.

As a Markham resident, my comics and gaming passion is often fuelled by Heroes World – the one place in Markham selling comic singles or the more difficult to find board games. With that being said, it is my pleasure to feature Heroes World this month: a small shop that makes a big difference.

Nine years ago, Andre Greenidge and Jon Ho were fresh out of school and planning their next steps in life. Though law school was the next step for Andre and a computer job was the next step for Jon, both were attracted to the idea of starting a comic book store of their own after working together at other indie comic shops. The result was Heroes World, which opened in 2001.

Initially, Heroes World mainly sold comic books with the occasional Monopoly or Scrabble game stocked during the holiday season. Upon opening, however, Jon and Andre made sure to closely observe and adapt to their clientele and the shifts in their industry. The two accepted game and comic orders, and ordered other products they thought their customers would enjoy based on these preferences. As a result, Heroes World gradually made the shift from a comic store to a full blown comics and hobby games shop. Currently Heroes World is nestled in the suburban heart of Markham, Ontario with a loyal customer base and a large shop on the corner of Warden Road and Highway 7.

When speaking with C&G Monthly, Andre reflected on the evolution of his store, saying, “More and more stores are closing these days, but I think the reason why we’re still here is because we keep a close eye on our products and foster a sense of community.”

Heroes World has certainly become a notable part of the Markham community. Their busiest day is Wednesday, when new comics are released, but every day in Heroes World boasts a bustling clientele. In addition to offering registered Wizards’ Friday Night Magic Games, Heroes World also hosts Dungeons and Dragons tournaments and regular game nights to introduce customers to new and old favourites.

Heroes World is run with so much heart and verve that it feels more like a clubhouse than a shop. Andre and Jon leave their doors wide open to novice and experienced gamers and readers alike, never discriminating between the everyday client and the once-a-month visitor. Rather than focusing on the hard sell of the day, both aim to foster an appreciation for comics and games in each of their customers, discussing each visitor’s likes and dislikes to find the best comic or game fit. Jon and Andre even offer their customers their own games to play with so customers can really get a feel of what they are playing before making any decisions.

Preparing for the Future

Despite how much time and energy store owners invest in their shops, it is impossible to deny that the rise of the digital era makes it increasingly difficult for indie stores to stay open.

Andre expressed his concern over the fact that more and more indie stores are closing, saying, “It’s definitely worrisome, especially for stores like ours that sell comic singles. These days publishers are producing trade copies of comic books almost immediately after the singles come out. When I was younger, you wouldn’t know if a trade would be coming out or not, so you would always make an effort to keep up with the story. You wouldn’t want to miss an issue. Nowadays, almost every series is placed into trade immediately after singles’ print and these trades are sold in big bookstores like Chapters or Indigo. In addition to that, with advanced eReaders like the iPad coming out, we really have to consider how business will be affected. Things will definitely change over the next five years, and to combat that I think we have to create more of a community for our comic book fans. We’ve done it with our gamers, but we’ll definitely have to make ourselves an essential part of the comic book reading experience if we want to survive.”

If a tight-knit community is needed for Heroes World to continue thriving, then Jon and Andre have had a great head start. Wednesdays especially reveals Markham’s involved comic book community as people visit in pairs or on their own and are quickly engaged by Heroes World staff to speak with others about their comic preferences. A quick visit can easily turned into a longer pow wow. Complimentary to in-store interaction, the Heroes World website also builds and fosters the in-store community, offering a forum for people to post about their latest finds or campaigns and keeping customers in touch with the staff.

As Justin Elliot, one of the Heroes World customer service representatives, said, “a comic book shop is not selling you a comic book, it is selling you a place to talk about it.” This remains true in Heroes World and many other indie stores. Indie shops are not necessarily about buying the product; it’s about the fact that stepping into the shop brings you into a place where you belong.

Heroes World is one of many independent gaming and comic stores in our communities that foster the industry we love. They are an important link in the chain of what we do, cultivating new, lifelong fans for the hobby.

As we enter the digital era of online gaming, reading, and purchasing, it becomes more common to see these shops closing one by one. As impassioned gamers and readers alike, however, next time you pass by an indie shop, make sure to drop in and say hi. You might have just entered your new favourite hang out spot.