Journey – It’s All About That First Step 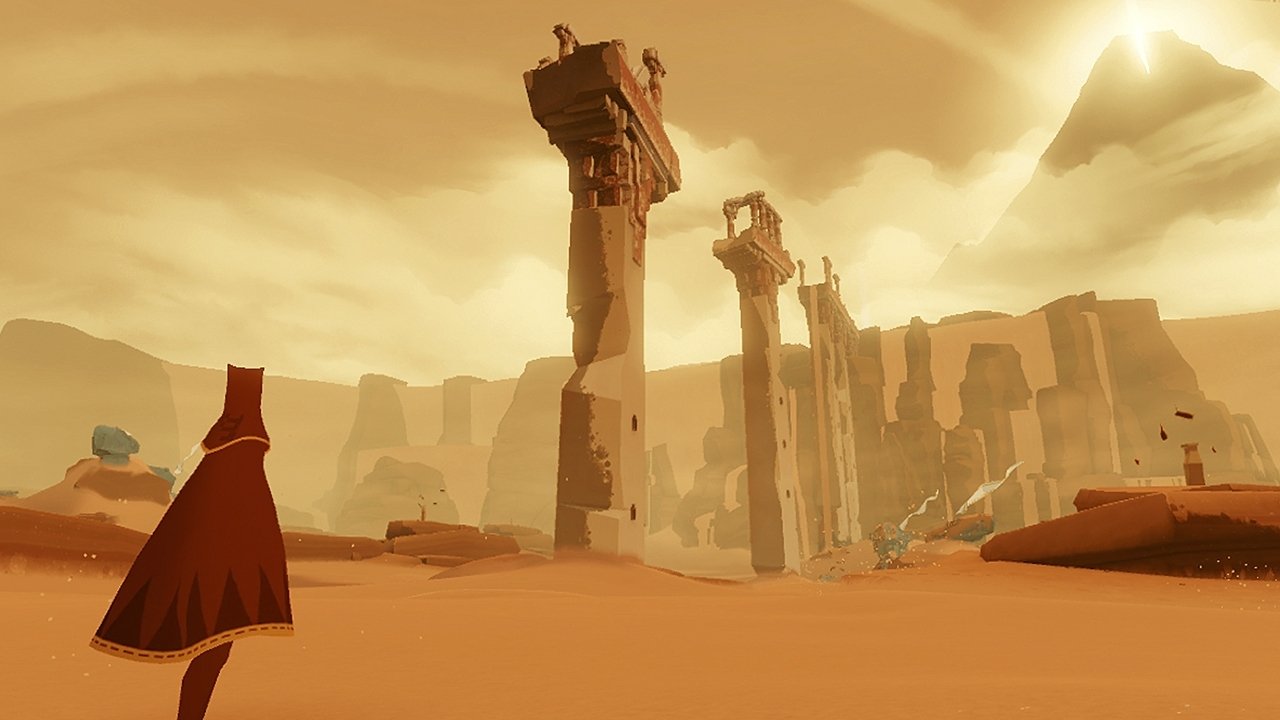 Journey, by that ThatGameCompany is a difficult game to talk about. That’s not because the game itself has some cryptic concept that defies explanation, and it’s not because the subject matter is too controversial to be discussed in polite company.

The simple fact of the matter is that much of Journey is reliant on the sense of discovery that comes from undertaking a journey for the first time, and to talk much about specific details—even game mechanics—can mar the intentions that Jenova Chen and Kellee Santiago have built into their strange new game.

In that sense, Journey lives up to its name, being not so much a game that is played, as a digital experience that is more about the process than the destination. When I sat down to play through the beta, courtesy of Sony, I found a game that is both intriguing in its premise and mechanics, and at the same worrying for the kind non-commercial chances it’s taking.  This is a game that will divide the player-base, and, like Flower and Flow before it, those that are engaged by Journey are likely to be outnumbered by those that “don’t get it.”

The game opens quite simply, with spare, effective art direction that emphasizes a simpler, stylized, more graphic look. Like previous Jenova Chen games, the visual style of Journey is more interested in evoking an emotional response, rather than trying to fool the eye into thinking it is seeing something real. A simple figure wrapped in a red cloak is in the middle of a vast desert. Even the face of the player controlled character is masked in cloth, and the gender is indeterminate, though the spare, clean, thin lines suggest female characteristics.

Like other ThatGameCompany games, Journey is entirely free of any kind of heads up display, or other graphical user interfaces.  The only reminder players get that this is, indeed, some kind of game is right at the beginning when controller diagrams appear prompting players to experiment with the limited vocabulary of actions available to them. Other than that, the game gets underway and asking players the biggest questions they will ever encounter in their gaming experience, or even their real world lifetime. Few games ask the player “Who are you?  Why are you here?” But Journey does exactly that in its mute, opening moments.

In a move that is both bold and perhaps even controversial, Journey provides little in the way of guidance. Contemporary gaming is full of helpful tutorials, AI companions that point out the way or even tell you where to go and what to do next. Journey simply leaves what happens next up to the players, relying on their own common sense, curiosity and a certain faith in the logic of human behavior to guide them to their next objective. There’s a mountain in the distance with a column of light shooting from its peak into the sky. It immediately attracts attention in the otherwise featureless dune sea, and so that becomes the goal; to get to the mountain.

While the game creates the illusion of a lone wanderer in an endless desert, the conceit is just that; an illusion. For the curious, the limitations of the game quickly become apparent by simply ignoring the destination laid before them and walking in the opposite direction. It doesn’t take long before an attempt to crest a dune is thwarted by winds so strong they knock the player’s character to the ground. There are no invisible walls here, just winds too strong to resist. However, when you go with the flow, choosing to trust your own sensibilities rather than test the boundaries of game design, what you’re left with is something both old and new at the same time.

Look To The Mountain

Exploration is the basic principle of the game. In that respect, Journey hearkens back to the more traditional adventure game, or early RPGs, where the driving goal was to simply keep moving to see what was over the next hill or around the next corner, occasionally overcoming obstacles in order to continue. The game leaves it to the player to check out the environment at a self-determined pace and learn more about the desert environment, dotted with the odd ruin here and there. It’s here that Jenova Chen’s own admitted admiration for Shadow of the Colossus comes into play, with the obvious influences being the sense of isolation and the recurring Team Ico theme of a destroyed culture with a mysterious past. To go into more specific details would rob players of some important discoveries, but it can be safely said that over the course of the game, one mystery to be unraveled will be the fate of the civilization that left such monolithic ruins to the sands of the desert. The feeling of openness, of nature still being the dominant force, evokes both Shadow of the Colossus and even Red Dead Redemption. Players get the sense that in a war between culture and nature, nature has won.

What’s interesting here is that despite ThatGameCompany’s location in California, and its decidedly “Western” approach to its games with the experimental Flow and Flower, Journey feels more Asian. This is not a typical power fantasy in the vein of Western shooters like Halo and Call of Duty. The player is not an elite agent with abilities far above the norm. Instead, feelings of insignificance and cultural legacy dominate the emotional range of the game. It’s clear that a great culture once flourished here, and as players get closer to their destination, the abilities they gain—and their understanding of cloth, apparently a resource of great importance to this civilization—will make it clear that what players learn and do in the game are just scavenging at scraps left over from this cultural collapse.

There is also the promised multi-player aspect that works exactly as Jenova Chen promised. No servers, no lobbies, no voice chat or even a player name to identify others. Instead, an identical wanderer can randomly appear and all communication is limited to strictly to movement and pressing the circle button in order to sound musical tones. It’s entirely up to the players to remain together for the journey or go their separate ways, although there are tangible, gameplay rewards for people that choose to travel together. Again, I won’t go into specifics about it here, since it’s all part of the discovery process, but certain abilities can be enhanced between players that choose to cooperate.

What remains to be seen is whether this more minimal, deliberately obtuse method of online co-op play will stick with the audience. This method of co-op calls for large amounts of patience, with the only way to “break” it being the methodical use of Skype, Xbox Live, or some other means of non PSN voice chat, and the coordination of actions to meet up at a particular spot to see if the random host assignment has put two players together.

The beta itself is not very long, and feels closer to a demo than an actual test of the game’s readiness for retail. There are no visible bugs to speak of, though the netcode is doubtless telling ThatGameCompany many interesting things about its success in anonymous player interaction. But the actual length of the beta itself can easily take over an hour for the careful explorer, or less than 15 minutes for players that simply want to get to the end as quickly as possible.

Whenever the game finally releases, players are in for a unique experience to say the least. There’s an automatic loss of interest on the part of the mainstream gamer as the complete lack of shooting will alienate them as quickly as Flower did. But for fans of ThatGameCompany, there’s already an intriguing promise being made with Journey. This will not be like Jenova Chen’s previous games, except in the sense that it will be different and experimental. Otherwise, the invitation to explore and decipher the mystery of a dead civilization will not soothe, as Flow did, or impress as was Flower’s intention, but humble players and remind them that there are forces far greater than themselves that once walked the earth, and even they were not immune to the ravages of time.