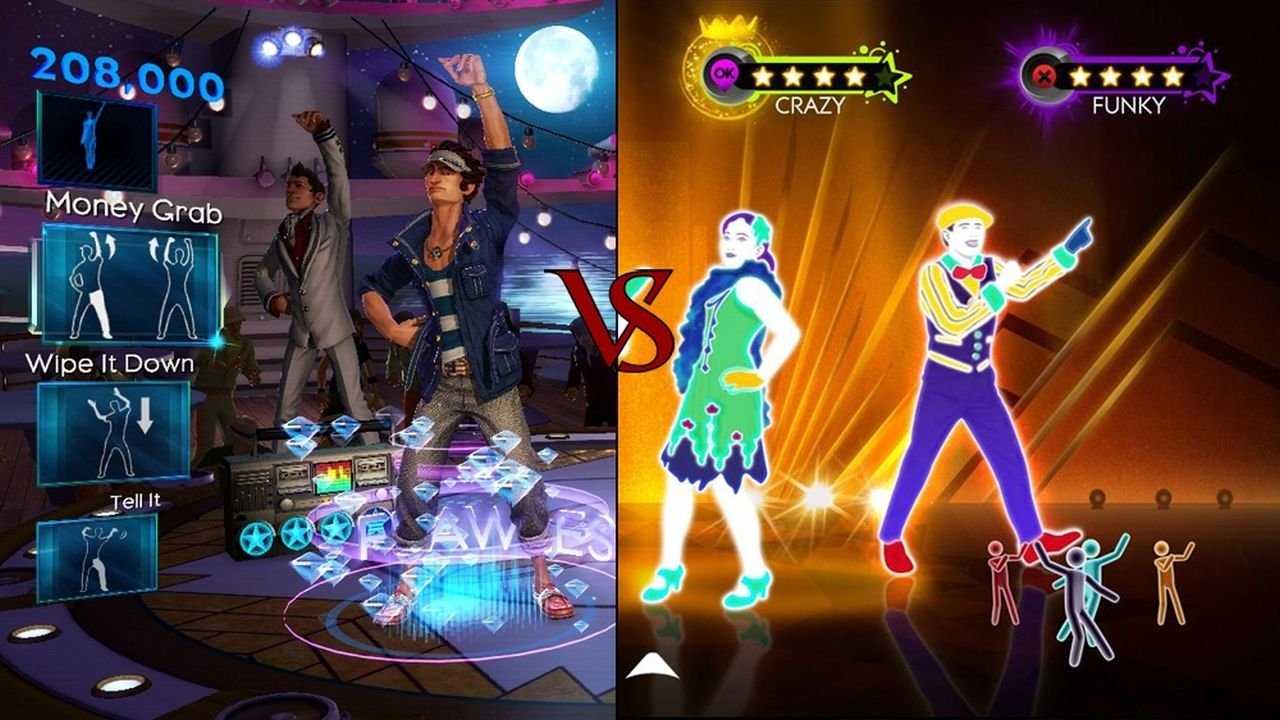 In the words of legendary MC Maestro Fresh Wes, “This is a throw-down, a show-down hell no, I can’t slow down. It’s gonna go!” Dancing games have come a long way since I first saw some kids stomping their feet to the beats of the pioneering Dance Dance Revolution. Long gone are the days of simply stepping on a dance pad while arrows scroll across the screen. These days if you really want to get your groove on there is no finer way than by using the Kinect motion controller.

There are two games currently on the market for the Xbox 360 Dance Central 2 and Just Dance 3. Today we will see how they fare in a head-to-head battle. Let’s find out which game has the freshest grooves, dopest style, and is the most fun for you and your friends to dance dance dance the night away.

Neither of these games are really pushing the graphical limitations of the 360 but what they may lack in super polished visuals they more than make up for it with style. Dance Central 2 is developed by Harmonix who are best known as the developers of the Rock Band series. So it’s no surprise that Dance Central 2 shares a lot of the same aesthetics. In fact the dancers in Dance Central 2 would look right at home among their Rock Band counterparts. On the other hand Just Dance 3 is developed by Ubisoft and continues with the series’ acid bubblegum pop art style. In Dance Central 2 people look like people, well, as close as crazy hip hop styles will allow. In Just Dance 3 the people look like silhouettes from a bad acid trip and not much at all like real people. The gameplay stages of Dance Central 2 look like a well funded crew battle, where Just Dance 3 has opted for a more cartoon like look. Both are valid choices but I’m going to give the edge to Dance Central 2, simply because it doesn’t make my eyes want to bleed the way the bright seizure inducing colours found in Just Dance 3 does.

Both games have a myriad of dance moves that will have you twisting, turning, and pumping your way from song to song. However it seemed pretty obvious to me that while playing Just Dance 3 the Kinect sensor was only tracking my right hand instead of my whole body. This may be a hold over from the series’ roots on the Nintendo Wii. I didn’t much care for the single hand tracking but I can see how it may provide a level of accessibility for those who may be rhythmically challenged or just plain bad dancers. Conversely Dance Central 2 makes it quite obvious that it is tracking your entire body during gameplay. This is illustrated by the red outlines that appear around your avatar’s body if your moves aren’t exactly matching those of your in-game mirror. This becomes more and more apparent in your score at high difficulty levels. If you don’t move your feet you may find yourself racking up a totally abysmal score. Just Dance 3 may get you in time with the music but if you really want to learn how to dance I think that Dance Central 2 is the way to go. That said, for people who like to party and are looking for something accessible that everyone from kids to grandma can play you may prefer the less challenging yet still satisfying Just Dance 3.

Music is subjective and so is finding your jam. So it’s a little more difficult to see who gets the edge when going track against track. Both games have a some well known club anthems and some more obscure songs that I don’t feel bad about not ever having heard of, but the truth is that they offer different things for different people. I did find that Just Dance 3 had more throwback songs like, The Sugar Hill Gang’s “Apache (Jump On It)”, 2 Unlimited’s “No Limit”, or “Venus” by Bananarama. While Dance Central 2 sticks with more contemporary tunes like, Usher’s “DJ Got Us Fallin’ in Love”, Lady Gaga’s “Born This Way”, or even homegrown tween favorite Justin Beiber’s “Somebody to Love”. Even though the track lists are very different I did notice that Just Dance 3 has more of a silly streak than it’s competition which is illustrated by including songs like “Let’s Go to the Mall” by Robin Sparkles, a song that will be all too familiar for fans of the CBS sitcom “How I Met Your Mother”. There’s also an appearance by “This is Halloween” from “The Nightmare Before Christmas”. For not being afraid to show it’s silly side, this is a game after all, I’m going to give the edge to Just Dance 3.

and the winner is…

It’s been a very close race, and both competitors performed well. Each game has its strengths and weaknesses. Dance Central 2 is aesthetically and mechanically the better game but Just Dance 3 is right there behind it with its simple and accessible gameplay and robust track list. While I liked Just Dance 3 for not being afraid to be silly, I preferred Dance Central 2 for it’s tight controls, fun modes and all around visual style. One thing still remains the same, whether you pick up Dance Central 2 or Just Dance 3 you will have a blast. Now it’s up to you to keep it rockin’ til the break-a break-a dawn.