So Long, LucasArts. It’s Been Real 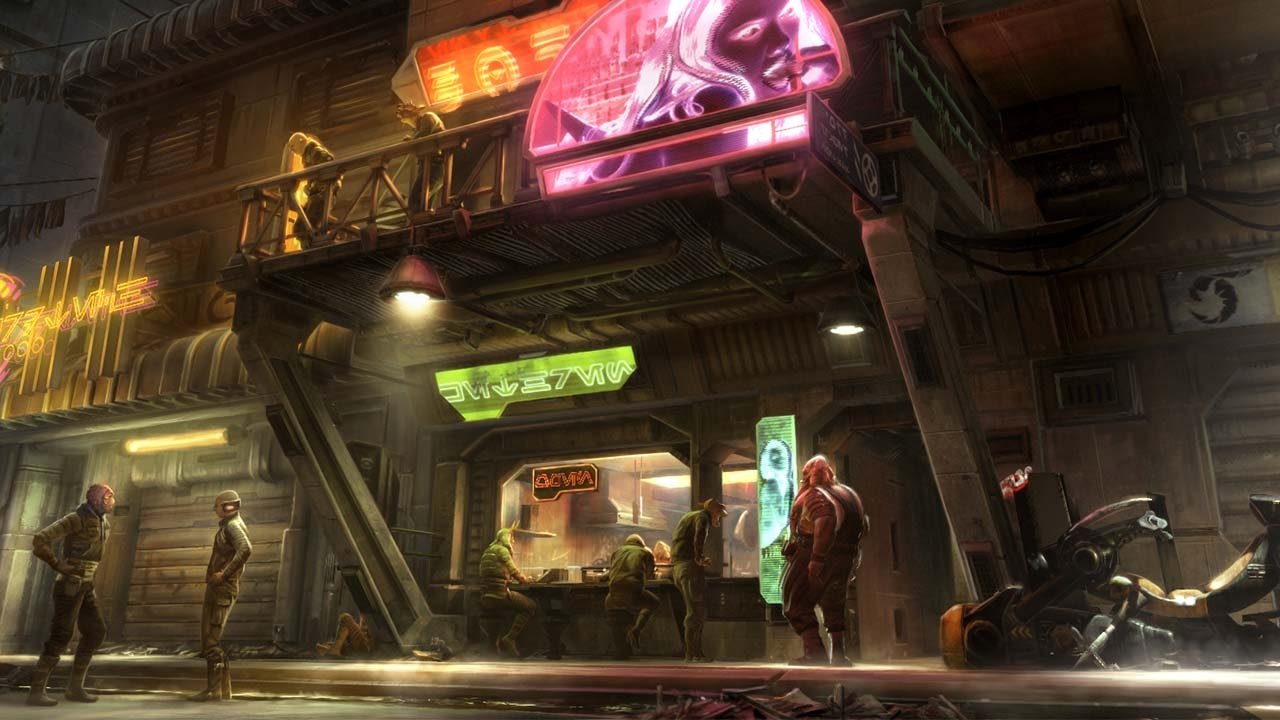 It’s no secret, that the once loved studio LucasArts is doing anything but fine right now. With the lock-stock-barrel acquisition of all of George Lucas’ properties to the Disney the final fate of LucasArts was always going to be uncertain.

Now, thanks to various rumours and unnamed sources within the industry, we get a clearer picture of what’s going on, and that picture is grim. Games like the much ballyhooed Star Wars 1313 are in limbo, and even downloadable titles like Star Wars: First Assault which was supposed to be releasing this spring are also just spinning wheels. Why is this happening? The usual reason; new management steps in, evaluates the situation, hems and haws over expensive business dinners (on the company tab, of course) and then starts firing people in the fine tradition of all new management wanting to erase the vestiges of the previous administration and justify their own paychecks. The practical consequence of all that is whatever is “old” at a company is bound to get trashed, and it looks like that’s happening with LucasArts right now.

This makes me sad on a great number of levels. Not many people will remember this, but LucasArts, like Electronic Arts, or even Activision, was once a company filled with dreamers and innovators. The first two games ever released by the company—then under the name Lucas Film Games, published by Epyx—were about futuristic vehicular sports and rescuing downed space pilots respectively. There wasn’t a light saber or star destroyer in sight. The next few years would see an explosion of creativity from the company as titles like Koronis Rift, Maniac Mansion and of course, The Secret of Monkey Island all showed the world that the level of imagination at George’s facilities wasn’t just confined to Star Wars. Of course, when the spotlight did turn to Star Wars, it still took a surprising twist with some of the most complex and satisfying simulated space combat available in the form of Star Wars: X-Wing that finally allowed the players themselves to switch deflectors to “double front” and understand what that actually meant. 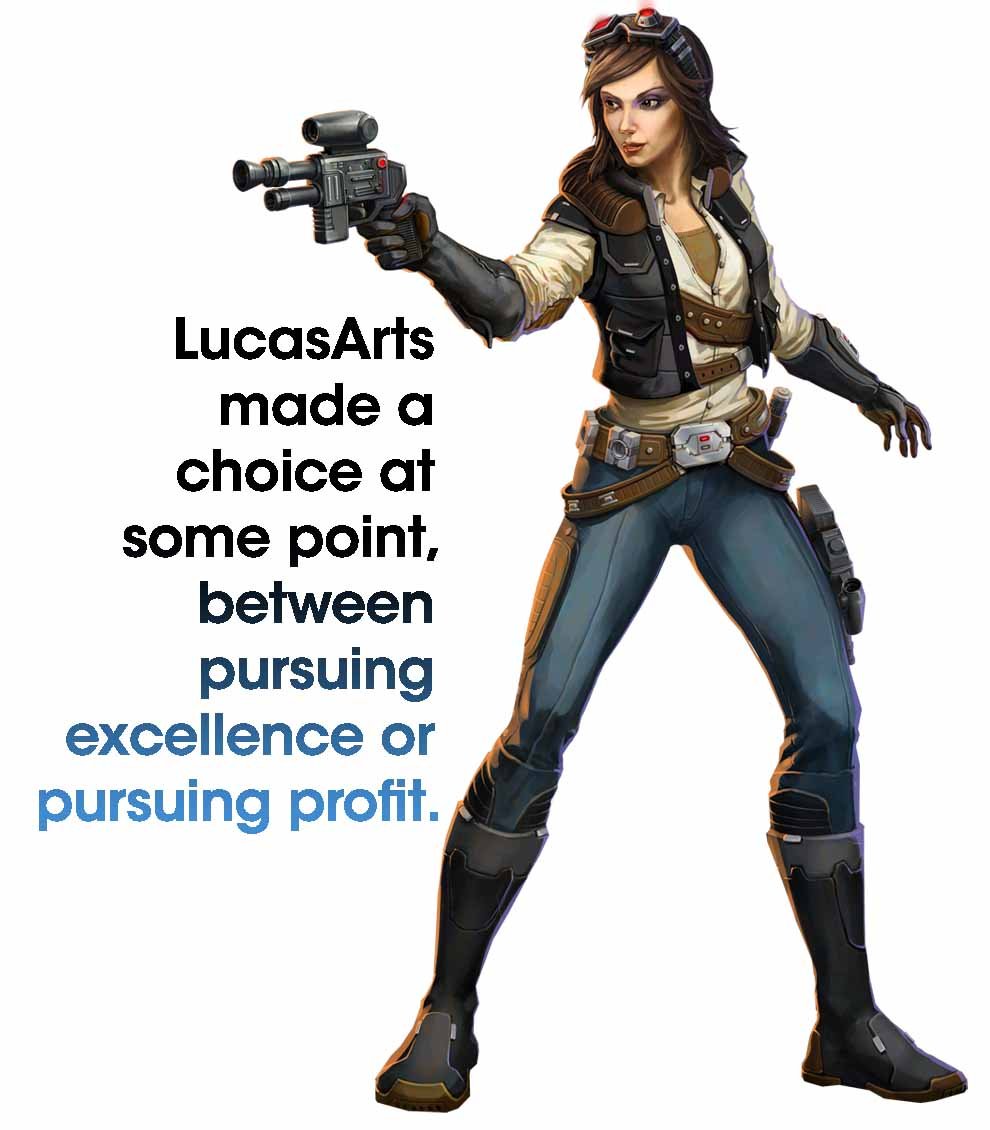 Unfortunately the good times couldn’t last, and once LucasArts got a taste of licensed success, they fell victim to the same problem that had hit both Activision and Electronic Arts earlier; the lure of bigger money pushed out the innovation. The same company that gave us compelling adventures like The Dig or even entrusted their cherished property to BioWare to produce Knights of the Old Republic started chasing after demographic research and larger market share. It meant the end of the more experimental, memorable phase of the company and the start of the floundering as their recent titles, namely The Force Unleashed II and the Star Wars: The Old Republic MMO have shown. Now, with a recent string of middling titles that have failed to be huge hits and a new parent company that has their own game development woes to fret over—just ask Warren Spector how well Junction Point Studios is doing right now—it’s no wonder that production on big budget, AAA games has ground to a halt.

What does this mean for LucasArts? It’s probably assured that the name, in one way or another, will continue to legally live on. And it’s also quite likely that at the very least, more Star Wars games will be come out in the future, as Disney understands the power of merchandise, and has trouble ignoring a multi-billion dollar industry. But as for the struggling LucasArts that we know today?

Perhaps, as with SquareSoft, before it became Square Enix, it’s better to remember this company as it was in the past. LucasArts, like many software developers and publishers that came before them, made a choice at some point, between pursuing excellence or pursuing profit. They chose profit and while occasional excellence can come from that pursuit, chasing after trends in a business that takes a few years for projects to reach completion was a recipe for growing irrelevance. In the past few years, LucasArts games have been neither very good nor immensely profitable. Now that they are just one more facet of a terrifyingly huge diamond that comprises Mickey Mouse, Pixar and the entire Marvel universe, they can’t expect to enjoy a privileged position when so many other properties—like an awful Avengers game, for instance—are guaranteed to milk the cash cow in the immediate future, regardless of quality. With new Star Wars movies coming out in just a few years, it makes more sense to capitalize on those properties when they’re in the spotlight. LucasArts hasn’t been a company that cared deeply about its work or its fans for years. Perhaps now as they go on “hiatus” in light of new management, we can accept this and just let them go.