At the back of every Image comic there’s a Q&A with a creator.

February featured Andy Diggle, the talented writer behind The Losers, and more recently, the new ongoing Doctor Who series and Snapshot, his latest creator owned venture with Jock. It was an entertaining read but one quote in particular stopped me in my tracks. In response to the question “What do you hope to see more of in comics in 2013?” Diggle stated: Fewer capes, more capers.

I love this. It’s so simple yet concise, summarizing the growing excitement and popularity of comics beyond the superhero genre. Focusing on story instead of overused iconic-looking characters. Don’t get me wrong; I love superhero books, which is why this quote elicited so many reactions from me. 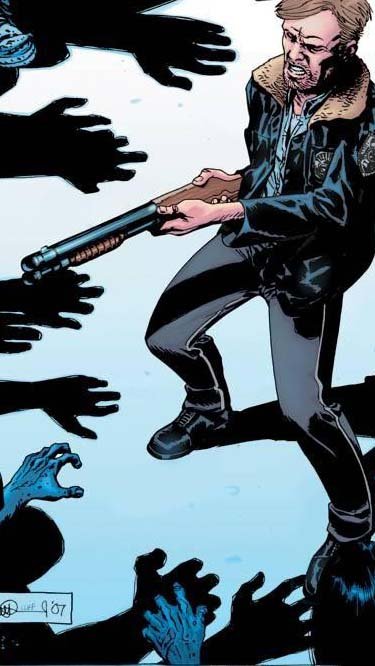 Comics don’t always focus on capes but there’s still a missing link in comic terminology for books published by larger companies that are not your typical superhero smash ‘em up series’. To me, they don’t qualify as Indie or Alt— the catch-all terms used for non-cape focused books— because series’ like The Walking Dead or Locke & Key are far too popular to be considered that. Sure, IDW, Image, Dark Horse, Archaia, et al. are not selling the same volume as Marvel and DC do, but they’re also a far cry from creators printing their own series’ at Kinkos and distributing it at conventions. These series also don’t focus on the exploits of the common man, like most traditionally Indie titles do; whether it’s Paying For It or Mister Wonderful: A Love Story to name a few recent examples. There’s no ‘zine-ness or small publishing feel to these books either: they’re glossy and well printed with great art and writing. Maybe that’s just my misconception of what Indie means but I still think it’s far too generic a term for everything outside of the big two’s series’.

After almost 100 years of comic books being published, why do we still refer to them like some genre-less entity? Comics. No adjectives or description of what to expect in them, even though they started off with fully formed genres (e.g. Western Comics, Romance Comics, etc.). If someone asks you what kind of films you like, there are thousands of answers; no one responds to that question with “movies”. Whether its action, romance, science fiction and so much more, there are options for film buffs to categorize and label their passion more effectively. The same doesn’t seem to extend to comics anymore, where the most common way to clarify what books you like is by publisher, or with the Indie catch all. Anything not Indie is implied to be about superheroes but just because a book has caped crusaders doesn’t mean it isn’t also a romantic murder mystery. Or a sci-fi thriller. Series like Scott Snyder’s run on Batman have been a tense blend of horror and crime fiction, with a strong paternal emotional undercurrent between Bats and his “family”. The fact that the main character wears a cape should not detract from a strong story would easily be defined as a psychological thriller if it were a TV show or film.

Supporting creator owned series’ or titles that don’t fit any label is a great thing; it allows storytellers to show the world exactly what they envisioned without editors or publishers changing core elements to suit the brand or universe. Providing alternative avenues for creativity, especially with all the popularity behind this shift to creator owned, will make a more diverse comic landscape and create opportunities for writers and artists that simply were not there before. That being said, I don’t think we need to sacrifice or shun using established heroes to tell some of those stories. There’s an odd double standard in comics, where if your protagonist has super powers, it makes them simultaneously more and less interesting. There’s the initial “Wow!” factor of their abilities but that can also be a crutch that allows a weaker story to hobble on. Readers inherently take superhero books less seriously too. The best Batman story ever will still elicit negative reactions, subconsciously or not, because it has a superhero in it— even if the story is stronger, more dynamic and thought provoking than an equivalent Indie book.

When we have better terms to classify the comics we’re reading, we won’t need to “pick sides” for or against capes or Indie. Why not use genres and sub-genres established in every other type of media? Fans will be able to communicate more easily and comics won’t be so overwhelming to new readers; they can easily find parallels between the books they read and the comics they’d like to try. Diggle is right about 2013 needing “Fewer capes, more capers”; let’s build up more defined genres of comic stories so we don’t rely on superheroes to do all the work for audiences. We’ll end up with better stories overall and maybe even some tales in genres yet unexplored in the comic medium. With better books coming out from smaller publishers, it’s just a matter of time before the big guys focus on more interesting capers for their caped crusaders. Either way, call it a win for fans.