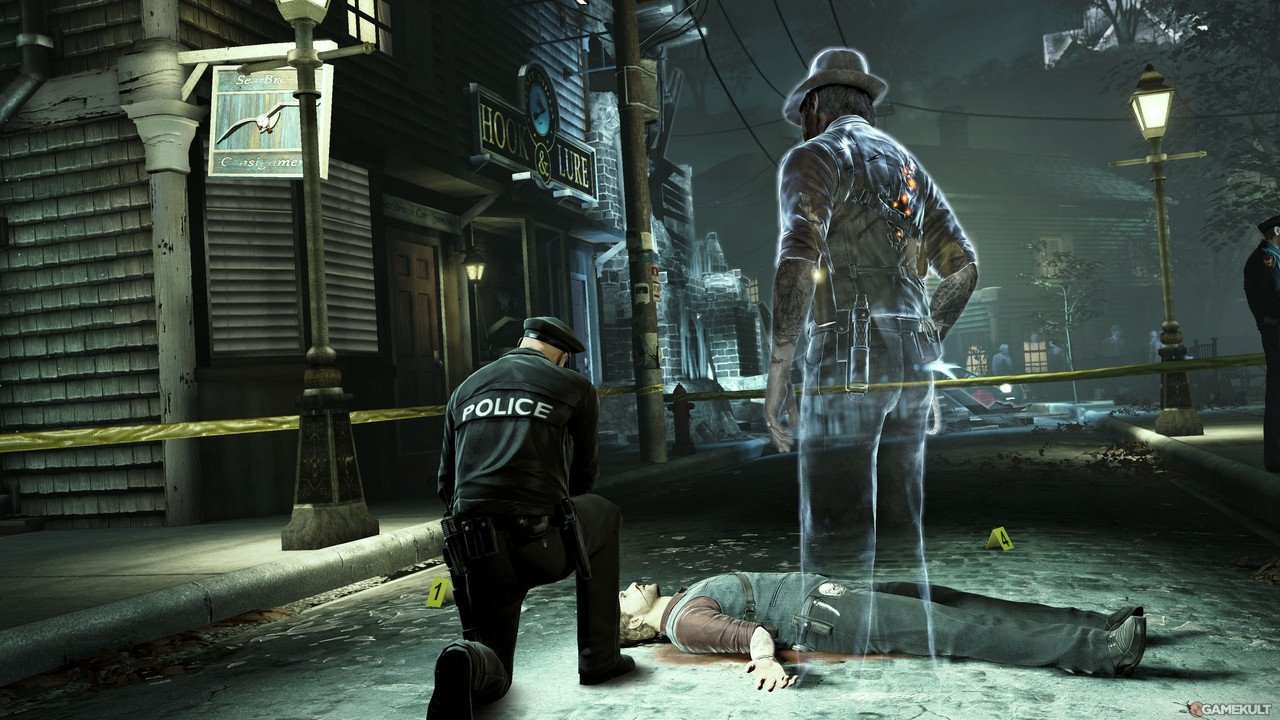 Painful pun in the title aside, I’m going to give Airtight Games the benefit of the doubt on Murdered: Soul Suspect, and the reason is very simple; they surprised everyone with one of the most original games at E3 this year.

Keep in mind, this is the same company that gave us the forgettableDark Void in 2010, but they also created Quantum Conundrum, so, as with Rocksteady, who had only done one PS2 game prior to Batman: Arkham Asylum, perhaps it’s better to not judge too harshly too early.Soul Suspect’s greatest strength is its intriguing mix of after-life detective work

Soul Suspect , in a hands off demo, took place in modern day Salem, starting with the death and subsequent ghostly manifestation of the hero, police detective Ronan O’Connor. After getting pushed out a window, then shot with his own gun, O’Connor finds that he still lingers on in the mortal world and is now determined to find out who killed him and why. This is a current generation game slated for release next year, so while the graphics are presentable, it obviously doesn’t carry the same amount of “shiny” as something like Infamous: Second Son or Ryse. The basic mechanics of the game are simple; anyone who enjoyed the investigation segments of Heavy Rain and wished there were more of them will find Soul Suspect to be the answer to their wishes. O’Connor can no longer pick up objects of interest since he’s incorporeal, but he can still observe, deduce and, most interestingly, jump into bodies to read thoughts, or look through the eyes of the host.

O’Connor demonstrates all of these abilities in the initial investigation of his own fresh corpse. There are elements of both Heavy Rain and LA Noire in this sequence, as O’Connor can walk up to various pieces of evidence and simply observe them, which opens up a menu of words of which players can pick three that best describe the situation. One example was picking “Strong” from a field of words in order to deduce that anyone who could take an aluminum baseball bat and hit it so hard against something that it actually bends must be… pretty strong. Once enough of these clues are gathered, O’Connor can arrive at a deduction—yes, there’s some shades of Deadly Premonition’s profiling going on here—and can advance the investigation to the next stage.

However, it’s not all gumshoe detective work as O’Connor is dead, and that means that there are some interesting new perks—as well as limitations—to work with. O’Conner can walk through walls, but he can’t enter consecrated spaces unless a door is left open. He also can’t just pick up objects and hold them up to his face anymore, although with some concentration, he can sometimes move objects, which can provide the distraction or misdirection he needs to get the living to cooperate with his agenda.

He’s also not completely safe. Apparently demons do exist in this world, though the definition in this case seems to be “ghosts that have spent too long on Earth and have forgotten themselves, hungering to devour the souls of other ghosts.” A brief snippet of combat was shown, with O’Conner using stealth to sneak up behind a demon in order to possess it, which resulted in an instant kill. There are also other ghosts scattered throughout the area that O’Connor can deal with as side-quests to help with their unfinished business, or as a means to finding new avenues of investigation when physical, real world evidence isn’t cutting it.

At this point, Murdered: Soul Suspect feels a lot like a high budget adventure game with a questionable combat engine tacked on. It’s taking the very risky stand of placing more emphasis on investigation and plot rather than shooting. Airtight did say that it was possible to fight the demons but even for their demo purposes, they avoided it and stuck to stealth moves to take them out.

Right now the big question hinges on just what kind of ratio of investigation to combat Murdered: Soul Suspect will have. Remember Me fooled everyone with an intriguing memory re-mix mechanic that ended up consisting of maybe 10% of the game while mediocre combat and platforming comprised the rest. Soul Suspect’s greatest strength is its intriguing mix of after-life detective work, but it remains to be seen if Airtight Games knows that, or worries that they need to have combat pointlessly thrown in for action junkies, something that Deadly Premonition is also guilty of.

Murdered: Soul Suspect is currently slated for an early 2014 release on the PS3, Xbox 360 and PC.