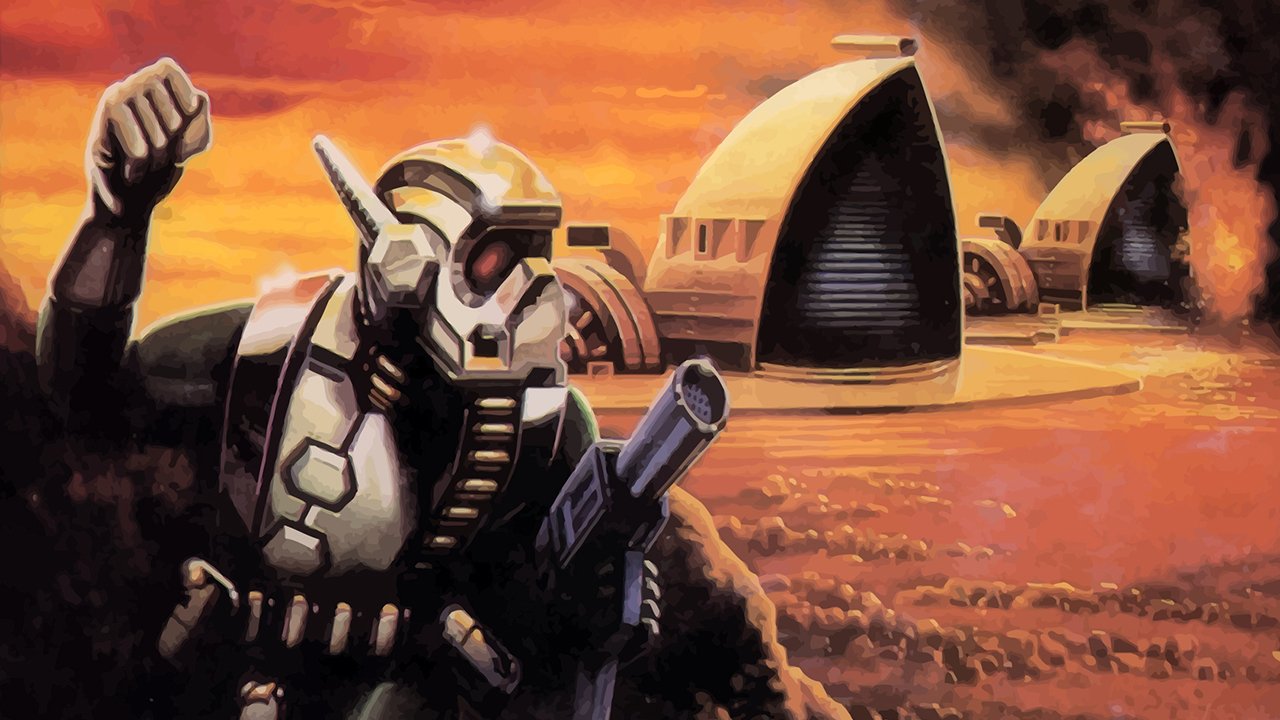 “Not too long after I started working at Westwood Studios, we were acquired by Virgin Interactive. They were a good parent company and let us continue to make the games we wanted to make. At the time, they had the license to the Dune movie for purposes of making video games. Another company in France, Cryo, was already working on a Dune game. We didn’t know what it was (Cryo was very secretive), but suspected it was an RPG of some kind. Virgin Interactive asked us if we wanted to do a Dune based game too and we were free to make whatever kind of game we wanted. Westwood had worked on licensed property before, mostly Dungeons & Dragons, with good success, so we said sure.”

There are very few things in this world that you can point to and say, “Yes, that’s where it all started”, it’s truly rare to find a single piece of engineering or design in which one can see how an entire field or genre finally came together, there are precious few epiphanies that set a format to be followed ever thereafter. It does so happen, that the game Joseph Bostic and the team over at Westwood Studios would produce would turn out to be such a piece of design and engineering. It stands today as the game that standardized a genre, that brought together all the elements in a single formula that would be followed in nearly every real time strategy game to follow.

“Although we knew the game was going to be based on the Dune license, we didn’t want it to be another RPG game. The popular games we played at the time were Populous, Civilization, and tabletop wargames. So we decided to make Dune II a game that combined the best parts of these (realtime gameplay, exploration & tech production, and military combat) into something fun and new.”

Nearly every element of real time strategy gaming that we have come to expect appeared in one form or another in Dune 2. Some of these elements, such as fog of war, were borrowed from these other genres while still others were invented during the game creation process. Regardless of source, they were all there. Base design and unit creation was centered around an evolving tech tree, centered in an area where the surrounding terrain limits sheer size, forcing the player to think strategically about not only the order of their base expansion but the actual layout as well. Additional strategic elements were added to this aspect of the game through the introduction of the mobile construction unit, which real time strategy gamers will immediately recognize as the very slow moving yet all important first structure of the gamer’s base. The inclusion of this unit, which would of course be reused in many games of the genre, forced the player in to a very early yet important decision at the beginning of every mission. To simply deploy the MCU at the nearest available position to ensure the enemy does not gain an early lead in base development or to move it closer to the nearest available resources in order to increase the speed of harvesting. These resources, in the form of the Dune universes’ all important Spice, needed to be gathered by harvesters in order to fund the player’s military conquest, giving huge strategic importance to the placement of not only the base itself but the refineries in it as well. Beyond this, it also places massive importance to the protection of these harvesters. A matter that is not so simple as it seems due to the dominance of the Spice fields by the massive man and machine eating sand worms of Dune which prevent the player from merely leaving military units deployed around the harvester.

The actual control of the units was another area in which Westwood showed it’s brilliance. Joseph Bostic is quick to point out that Dune II was not the first strategy game to make use of the mouse.

“Although the mouse had been used in games before, such as Populous. It felt natural to use the mouse in Dune II to directly select units and give them individual orders. It didn’t seem particularly innovative at the time.”

Whether or not the use of the mouse seemed innovative at the time, the way its use was employed certainly seems innovative in retrospect. Earlier strategy games had typically relied largely on hot keys in order to more directly interface with any unit or building. Allowing the player to use the mouse to complete just about any task required was a huge step forward and vastly important part of the game and its influence on the genre. The ability to simply load the game and start playing without the need to memorize or post a list of hot key commands gave the game a fantastic feeling of accessibility. It also served to remove just about any possible learning curve surrounding the controls of the game. Your success or failure could not be blamed on being unfamiliar with the controls, you couldn’t suffer some sort catastrophic event, such as losing a refinery, due to the five seconds you spent looking up a specific command. For such a natural decision, something that did not feel particularly innovative at the time its effects touched, and improved, every aspect of gameplay and of the emerging genre as well.

In the grand scheme, it may not be any of these innovations that makes the game so spectacular, but the way that they were combined. The game created the perfect balance between all of these elements, no one element seems to have sacrificed any depth, the fun factor is never lost in order to bring about the inclusion of another feature or element. The base building (especially in longer missions) is never undercut by the combat elements of the game, it doesn’t wind up feeling clunky or like a task that simply must be completed in order to continue in the more entertaining aspects of the game. Even resource gathering, which typically seems a mundane task meant only to limit base and unit construction, maintains its edge throughout the game due to the possibility of attack by the enemy or sand worms. It’s also interesting to note that these elements and balance between them was not something that was set in stone or conceived of from the very first moment that development began as we all tend to think of game development progresses. Throughout its creation, the game went through what many refer to as an organic system of development, Joseph Bostic explains it best,

“When starting development of Dune II, we weren’t exactly sure what we would end up with. We knew what our inspirations were at the start of the project, but there were no other RTS games we could look to for guidance. This meant that we would try experimentations with gameplay elements, such as harvesting for example, while in the middle of development. This would lead to other ideas to try and the process would repeat. This is what we referred to as “organic” development.”

Whatever the process of development, the finished project was truly spectacular. When the game was first released in 1992, it was met by strong reviews and comfortable sales. A position afforded to it not by birthing a genre (an accomplishment not recognized until later years) but by simply being a fantastically entertaining game. While we had the opportunity to speak to Mr. Bostic, we asked him what he thought it was that made the game so fun,

“The most fun of Dune II I think is the sense of empowerment gained from harvesting and manufacturing that is also combined with exploration and combat. The real-time nature of the game makes the whole formula more exciting as you have to think fast and react to the enemy as much as you have to think of the long term strategies of the battle.”

Within a few years of it’s initial release the game had been ported to the Amiga, Sega Genesis and RISC OS. Although these ports did their best to remain faithful to the original, the MS-DOS version remains the definitive release of the game, offering the highest limit on the number of units the player is allowed and avoiding the disc swapping of the Amiga release. Interestingly enough, for such a successful and positively reviewed game it did not spawn an immediate direct sequel. It did however spawn a spiritual sequel in Command and Conquer: Tiberian Dawn a game that carried over all the elements of Dune II and spawned no less than eleven sequels.

Joseph Bostic explained the decision to move away from the Dune license,

“We didn’t make a Dune III because we wanted the freedom to create our own game world. The first Gulf War was going on at the time we were brainstorming C&C, so we decided to make the next game more about modern-ish military.”

Westwood did make a return to the Dune universe in later years with their 1998 release of Dune: 2000, a name that seems slightly less ironic when you consider the fact Dune II was not actually a sequel to Dune itself but was so named to avoid confusion with Cyro’s release of Dune. An unusual licensing situation made possible by Cyro’s use of Frank Herbert’s novel and Westwood’s own license being based on David Lynch’s 1984 film based on the novel. Though Dune 2000 was unfortunately met with little success it was followed by the release of Emperor: Battle For Dune in 2001. Of the games forming this loose trilogy, Dune II does continue to stand out as the most innovative and important title of the series, despite Emperor’s introduction of a system through which the fog of war effects both human and computer controlled players. It must be said as well that in all fairness, the creation of a new genre is a difficult act to follow. An accomplishment that Joseph Bostic remains humble about to this day.

“I like how Dune II turned out and am glad that other developers have found inspiration in it. I am as surprised as anyone that Dune II is considered the start of a new genre of game. At the time we were developing it, we thought it was just a new fun game.”

So whether you are looking for a fantastically designed and wildly entertaining classic, looking to understand a game that defined a genre and launched a legacy or merely to experience David Lynch’s vision of the Dune universe without needing to suffer through the acting of Sting, Dune II is the game for you.