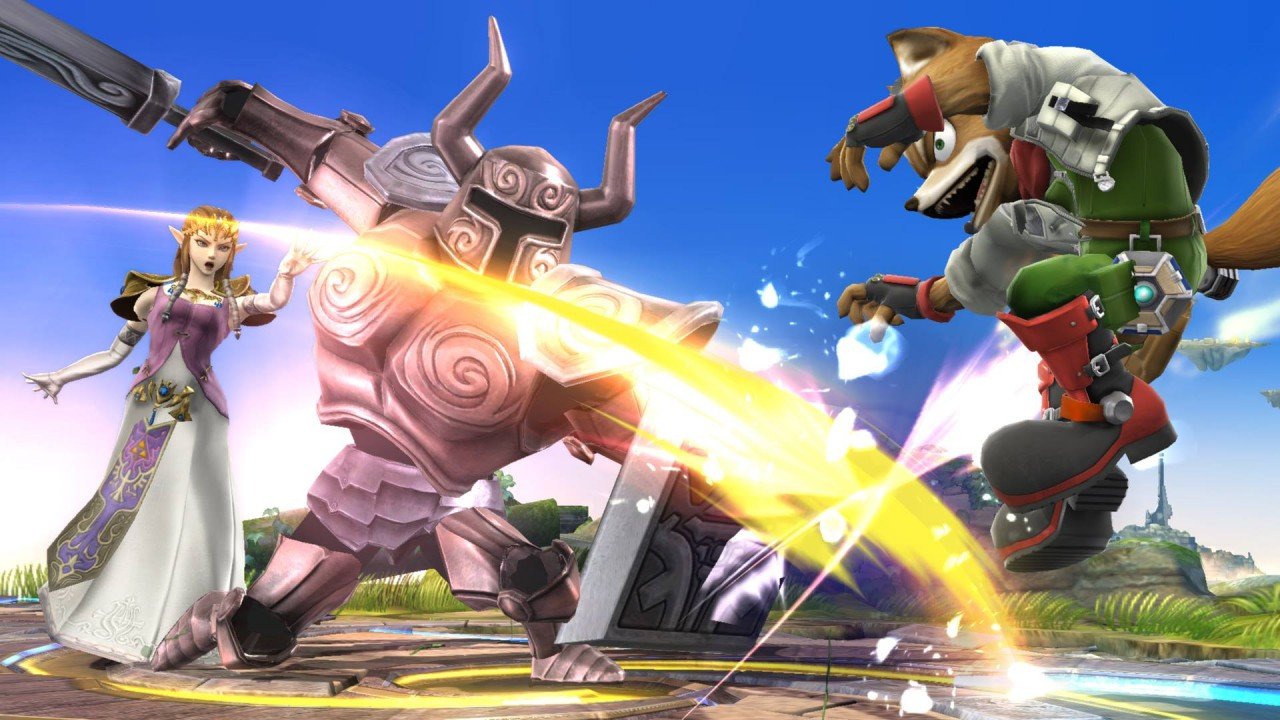 Another Nintendo Direct has come and gone, and like usual it did it’s job to get the hype train rolling.  This month’s Direct was filmed in the Namco Bandai building in Japan, where Super Smash Bros. director Masahiro Sakurai has been working on the latest title in the series. This instalment of Nintendo Direct was all about the upcoming game, and there was quite a bit to get excited for.

The first and probably most important was the announcement of release windows for 3DS and Wii U titles respectively. The 3DS version will ship sometime in the summer of 2014, while the Wii U version is slated for winter 2014.

Each game will have the same roster, and they both sport online play, but that’s where the similarities end.  The 3DS will have some mobile themed stages like the Super Mario 3D Land inspired level 3D Land, the returning Donkey Kong stage Jungle Japes, and even the Legend of Zelda: Ocarina of Time area Gerudo Valley.

The Wii U has some cool stages too.  The ones that stood out (to me anyway) were The Super Mario Galaxy stage--Mario Galaxy, the Metroid inspired Pyrosphere, and the Legend of Zelda: Skyward Sword stage Skyloft. The 3DS stages will offer just two songs for each stage, whereas the Wii U version will have a lot (no exact number was specified).  They also showed different screens for some levels, so it’s likely there will be some variety in the stages, like different parts of the level or different iterations to choose from.

The differences don’t just end with the stages though. The 3DS version will have unique content that won’t be available on the Wii U.  Smash Run is one of those features. It’s an online mode that allows up to four players. You get five minutes on a big map to collect power ups that upgrade speed, attack, jumping, special damage, projectile strength, and defense all while fighting off enemies. Imagine Metroidvania style gameplay here.  Once the five minutes are up, the players fight in a normal match with their weapons and upgrades they found along the way. It sounds like a fresh take on the formula, and it will fit in with the hectic over the top style of the series.

For Wii U, the online has been completely revamped. When playing against people, there will be no more anonymity. Players will have their accounts in full view. That way Nintendo can track characters, and players can know who they’re fighting. Nintendo will also implement some rules to make online more enjoyable. Players can report when someone is targeting one person, using profanity or cheating. There are also punishments for wrongfully reporting someone. It sounds like a way to keep casual gamers and parents happy. But in the big N’s defense, the world of online gaming can get pretty nasty.

Those rules will come in handy for the two new online modes. Aside from playing with friends where you can customize the match to your liking, there are two other modes for online play. The first is For Fun, where the stages are picked randomly (excluding final destination). It includes all items and only victories are recorded.  The other mode is For Glory. The only level is Final Destination, there are no items and both wins and losses are recorded.  Fans won’t have to be worried about the level getting boring, because each stage will have a final destination version.

Another cool addition shown was the Yellow Devil. This is a character that shows up in the middle of a fight to block and attack characters. Players can kill him by attacking his eye. When he dies, he explodes and it is used as an attack for whoever kills him. It sounds like another Smash Ball idea where the game will turn into a mad dash to get the upper hand. There will also be boss battles, and Ridley from the Metroid series was teased. It will be interesting to see what other bosses will be available since Bowser is a playable character, and Ganondorf has been featured in the past two games as a fighter too.

Speaking of fighters, a lot has changed. Instead Samus and Zelda having two forms, Zero Suit Samus and Sheik will be their own stand-alone characters with unique move sets.  Yoshi looks like he’s been working on his posture too. He can stand upright now and he’s a little stronger.

There was a lot of information given on a bunch of characters, but there was a lot of emphasis on Little Mac from Punch Out. His fighting style is really unique. He’s an up close ground and pound fighter. On land, he hits hard and is very durable, but in the air, he’s not very useful. His jumps aren’t impressive at all, and the damage he can cause lowers in air. I think this is a pretty interesting fighting style. On a level like Final Destination where there are no platforms, he could be lethal, but his second jump looks abysmal, so players might want to stay away from edges with him. For his final smash, he turns in to Giga Mac, a giant over powered version of himself. He seems to fit in line with the game.

Rosalina and Luma from Super Mario Galaxy look pretty cool as well. What separates them from the rest is that Rosalina can toss Luma and use her (or him, the gender wasn’t really specified) almost independently. This means players can potentially surround an enemy to set up a pretty sweet combo.

There were a lot of changes to many characters, and it took up a lot of the Direct, but Nintendo saved two huge reveals for the end. Charizard and Greninja will be playable characters. Charizard has a history in the series as a fighter, but he was one of the Pokémon you can sort through as Trainer. Now, he appears to be his own standalone character, and that’s pretty cool. Geninja is a pretty powerful Pokemon as well, and as a water/dark type Pokémon, he can be a perfect foil to the big firey dragon. Greninja will probably be faster and more agile, whereas Charizard will be slower but more powerful. I like the idea of having the Pokémon separate from the trainer; I don’t recall ever using Squirtle or Bulbasaur on purpose anyway. I look forward to the potential Bowser vs Charizard match up too.

Those were the major talking points from the Nintendo Direct. There was a ton of information packed into a 39-minute package, but a lot of questions were answered. Now we just have to wait until this summer (or winter if you don’t want the 3DS version) until we can finally get our hands on one of Nintendo’s biggest franchises.