The Interview: Can Games Ever Go There? 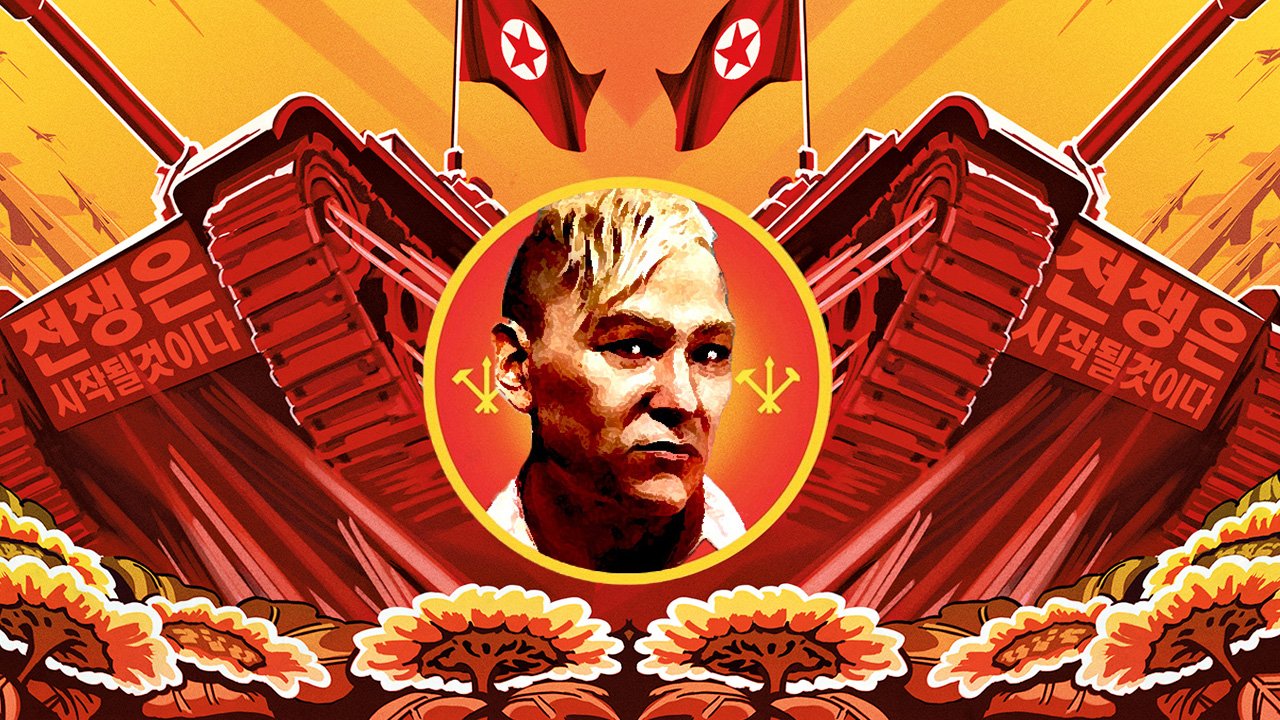 The controversy surrounding The Interview, despite being rather silly, did expose the worrying limits of creativity – it’s dangerous to base a movie around real, living people. If a raunchy Seth Rogen and James Franco comedy, which revolves around both actors’ characters attempting to assassinate the current leader of North Korea, Kim Jong-un, elicited such an outcry what would happen if a video game dealt with similar material? What would happen if such a young industry, which is still being heavily criticized by politicians, and still isn’t fully accepted as a proper creative medium, churned out video games that deal with real people, like Kim Jong-un, and paramount events in history?

Considering the lack of such games, both developers and publishers are frightened by the inevitable, prodigious consequences they’d wrongfully face. Though one might wonder why would we even need, or want to play a video game so heavily based on reality – inevitably containing strong commentary. We play video games for escapism, not to be lectured by them people would say; developers would also be creatively limited in their development process. It’s because having these types of narratives can be one of the next, imperative steps in having this young industry maturing and finally being taken seriously. And the lack thereof highlights how far behind we are to achieving this goal, and the astounding precautionary measures studios have to take when they do decide to talk about substantially mature, and real subject matter.

As it stands, video games shy away from political and social commentary and when we do receive a game willing to venture into more riskier storytelling, like 2012’s Spec Ops: The Line, Gone Home, or Bioshock, the criticism, meaning, and references to history and our current reality is incredibly subtle. Though it is true that strides are being made in the narrative department, as we’re seeing more and more of these types of topics discussed in games, like in the three I’ve mentioned.

Homosexuality, sexism, cannibalism, the human psyche, socialism and communism are all brought to the audience’s attention. But it feels as if these topics are mostly explored by developers in pusillanimous fashion, with their hands tied behind their backs. There’s a lingering sense that considerable effort is being made to not offend anyone of any importance, or any group of people. Take Far Cry 4 for example, though Ubisoft’s fourth entry in the first-person open-world series does contain a, mostly, forgettable story it does flirt with criticizing religion.

Without spoiling much, there’s a side character named Longinus for whom the player can do various side quests for. Longinus’ shtick is that he’s a man who has committed a plethora of atrocities before being ‘rescued’ by religion. Despite his new-found faith, he’s still in the business of selling illegal weapons and blood diamonds, some of which you can acquire for him. As you might have guessed by now, here is the attempt to criticize religion, and some of the people who follow it by Ubisoft. Longinus believes that because he prays every night to his God, and slightly follows the teachings of whatever he believes in (which isn’t mentioned), he has atoned for the sins he’s ready to commit, and has already.

But here’s the problem, Ubisoft goes practically nowhere with Longinus’ character arch. After a few brief cutscenes which display exactly what I just mentioned, and a few mundane side missions he vanishes, with no real conclusion to his story or anything on the topic of religion: Ubisoft played it safe. There was even an opportunity here to make direct references to real individuals or events in history similar to Longinus, who have used the excuse of religion to achieve their personal goals, and hurt plenty of innocent people – the Crusades, terrorism, and Adolf Hitler just to name a few.

But because Kyrat, Far Cry 4’s setting, is entirely fictional Ubisoft can make the excuse of Far Cry 4’s world not existing in ours, thus having no affiliation with someone like Hitler. That leaves the effort of at least delving deeper into the topic of religion, and using the player’s direct participation in Longinus’ gains gameplay wise, with the fictional characters and events Ubisoft can concoct, intact. They fell disappointingly short.

Now going back to having actual, well-known people in games, why is that such a stigma? Though The Interview showed that even movies have difficulty including actual people alive today, they have no problem telling stories about equally significant, but recently deceased individuals. Clint Eastwood’s recent effort, Oscar-nominated biographical film American Sniper, is a prime example. The film follows U.S. Navy SEAL Chris Kyle (Bradley Cooper), the deadliest sniper in U.S. military history and his struggle to cope with morality and death during his four tours of duty in Iraq, and leaving the war behind when he finally returns home to his family. The tragic story of Chris Kyle is a recent one, having only died two years ago.

Despite the risks involved with basing a film around something like this, such as being as accurate as possible, without romanticizing the whole thing as Hollywood is prone to doing, Kyle’s story needs to be told. Snipers are practically ghosts, that’s their job and the gargantuan responsibilities they have aren’t really brought to people’s attention all that well, if ever; and a movie can get away with telling this type of story, and then some.

But one has to wonder, can a videogame ever get away with it as well? Videogames have the exclusive power of interactivity, as we’re constant and direct participants in their digital worlds. So if we’re given the opportunity to play as Kyle, to relive his four tours in Iraq, and his last years spent with his family, whilst the video game in question stays as historically accurate and respectful as much as American Sniper does, and maybe it even pushes the boundaries with depicting Kyle as the awfully flawed man that he was, which the film arguably fails to do, will a developer and publisher also be showered with honors? I think not.

Instead we’ll see a deluge of fierce criticism and fear from a smorgasbord of people, ranging from politicians both right and left-wing, parents, and even the military itself about the game allowing players to struggle with killing people as Chris Kyle, and questioning/criticizing patriotism and Kyle himself. A developer has a better chance at saying something profound with Kyle’s story than a director has because of that power of interactivity. Instead of just passively witnessing the horror and anxiety, we’ll be a part, and consequence of it as close as possible without actually touring Iraq.

Of course the fact that video games so far have failed miserably at accomplishing this, giving little confidence to the public, needs to be acknowledged. The Sniper Elite series, which does let you play as a sniper eliminating Nazis, is an example of a slew of games that pride themselves in cartoonish, gory violence and little historical accuracy. Though developer Rebellion Developments shouldn’t be criticized for not bringing us serious experiences, as they’re not in the business of doing that, people outside the games industry bubble only have examples, like Sniper Elite, for reference – games in which you can shoot Hitler in the face hundreds of times, blood pouring everywhere.

You also have juggernauts like Call of Duty and Assassin’s Creed which constantly fail to make the best use of the subject matter and source material they’re based on. The first Assassin’s Creed entry, for example, takes place during The Third Crusade in the Holy Land in 1191. This tumultuous time period is ripe with a panoply of important events, tragedies, and historical figures that, if used correctly, can easily make for great storytelling – at least much better than what we actually received. Despite the barrage of visual splendor you’ll inevitably encounter with Assassin’s Creed settings, as Jerusalem is beautifully realized in the first game, everything else feels empty.

But there’s a light at the end of tunnel. This young industry has come a long way from the Nintendo days of an Italian plumber saving a princess as being your sole source of any type of narrative conflict. The film industry couldn’t have pulled off an American Sniper, or The Theory of Everything, or even The Imitation Game in its early days, and it didn’t; it still struggles to pull off a comedy about Kim Jong-un. This vacant creative space in the games industry is an important void to fill because, as I’ve said, video games are potentially the best way to experience these types of stories.

The more we have Gone Homes, Bioshocks, and The Last of Us’ the closer we’ll get to video games being satisfactory sources of biographical information, and living and breathing history lessons. But with so few examples of satisfying storytelling from last year, we’re still a long ways off from getting there. As it stands, a video game can’t ever go there, but when it’ll be able to with aplomb, it might just set the world on fire.

File Under: Assassin's Creed, Bioshock, Call of Duty, Gone Home, Spec Ops: The Line, The Last of Us