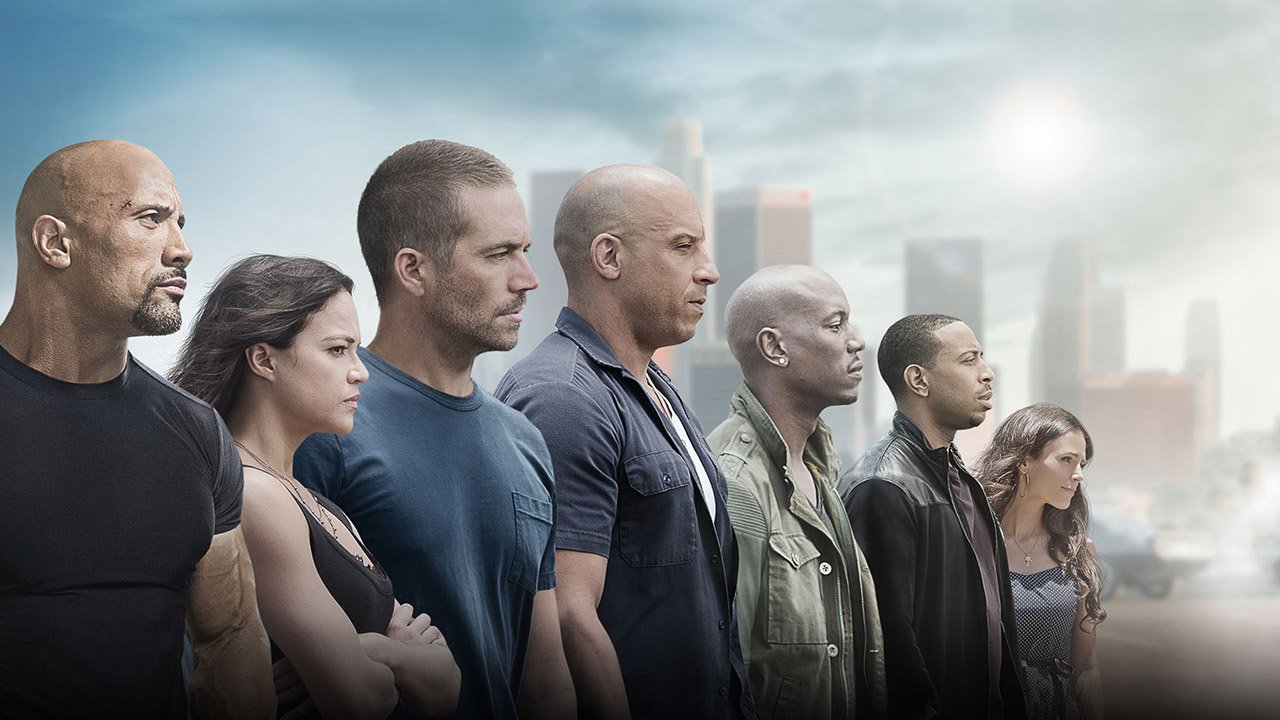 Chug an energy drink, shave your head, tear the sleeves off your shirt, and call your bros because the Fast & Furious franchise is back and dumber than ever. Delayed a year due to the tragic death of Paul Walker, the blockbuster franchise dedicated to dumbing down the world continues to serve up stupid as sincerely as possible. I bet at least once in your life, you woke up in the middle of the night covered in sweat because you were worried that no filmmaker would ever have the guts to drive a car between skyscrapers or skydive hot rods onto a highway. Well, you’ll never suffer those particular night terrors again. Vin and the gang have made your dreams come true as well as a few you that you never even dared to imagine. This series has grown from derided trash into beloved trash over the last 14 years and the last three increasingly insane chapters never disappoint. Summer movie season has officially started earlier than ever and it’s a magical time to be alive.
Once again, the plot of this Fast & Furious flick is almost inconsequential, but there’s just enough of it for this show to qualify as a movie. Enraged by the defeat of his brother in the last Fast, Jason Statham has emerged with plans to hunt down Vin Diesel’s crew and kill the hell out of them. Statham succeeds in killing off fan favorite Sung Hang, bombing Vin’s home, and putting Dwayne Johnson in the hospital (yes, The Stath fights The Rock and somehow it’s even better than you could possibly imagine). Diesel doesn’t take too kindly to an attack on his family, so he vows to kill Statham until he’s dead. Then Kurt Russell shows up as some sort of secret government-ish guy or whatever and offers Vin a deal. If Diesel and his crew steal a hacker and a computer chip from a terrorist, Russell will deliver Statham on a silver platter. Given that Vin and his gang of street racers turned drug smugglers turned bank robbers turned government operatives can accomplish any task with fast enough cars, he agrees and shenanigans ensue.

So yes, there’s a story in Furious 7 and no, it doesn’t really add up. For one thing, Diesel doesn’t need Russell to deliver Statham since that cockney bad ass follows Vin around the world looking for a fight anyway. But who cares? Because of that unnecessary plot device, we not only get a few globe-hopping music video montages, but Kurt Russell gets to class up the joint. It’s totally worth it. The action continues to arrive as fast and furiously as possible and the Looney Tunes logic/physics that have been part of the franchise since Fast Five remain. Between all of the accidental belly laughs, the movie serves up some absolutely stunning action scenes that boggle the mind in their combination of idiocy and ingenuity. Unfortunately the new director James Wan (Saw, The Conjuring) doesn’t present it all with the same visual clarity and physical-focus of the dearly departed Justin Lin (The Fast And The Furious: Tokyo Drift, Fast & Furious, Fast Five, Furious 6). There’s more CGI and plenty of shakycam silliness. However, Wan delivers some more than worthy set pieces and plenty of excessive style in his own way. So he was indeed a wise choice. The franchise is in good hands with Wan for as long as he’s willing to stick around (and given that he’ll get bottomless budgets to keep cranking these out, that’s going to continue for a while).
Statham and Russell make perfect new additions to a cast that’s already a damn delight. No one takes the proceedings too seriously, except for Vin Diesel who seems to truly believe that this series is actually about family values and is only willing to wear sleeves if it’s a disguise (no joke, he’s even got an undershirt on during a wedding flashback). The Rock is sadly out of commission for most of the movie following a smackdown for the ages with Statham, even though it’s worth it for him to announce his return in style for the finale, that feels like a waste. Dwayne “The Rock” Johnson is the only performer who understands the exact mix of self-parody and sincerity that the series requires and hopefully he’ll get more screentime next time. The late Paul Walker’s appearance obviously comes with a certain melancholy and CGI/body double trickery, but even that’s handled quite well. In particular, the movie wraps up with a surprisingly heartfelt farewell to Walker that qualifies as the closest thing to genuine emotion that these movies will ever elicit from audiences. It’s really rather sweet in its own obvious and overdone way (that’s just how these movies work damnit).

Furious 7 is absolutely everything that the fans of this series want it to be. It’s genuinely exciting and genuinely stupid. You’ll be amazed and appalled. You’ll cheer sincerely and laugh ironically. There are some fun performances and amusingly crappy performances. It’s a sugar rush of trashy entertainment that somehow manages to sustain an almost 2.5 hour running time because it never slows down long enough to offer boredom. Sure, if you haven’t been seduced into falling for this automotive idiocy yet, nothing that appears on screen will remotely sway your opinion. However, the legions of Fast & Furious converts will be thrilled. This ranks high amongst the series, even if it doesn’t quite match the magic of Fast Five. That will likely always remain the pinnacle of the stupid series and that’s fine (you can only introduce The Rock and self-parody to a franchise once). The beauty is that Fast Five transformed this series into something magnificently stupid and there’s no going back. The filmmakers may never top that trick, but they will clearly get more money every time to make their delightfully dumb ideas bigger than ever before. Hopefully this series will keep going and given all the money that is left to be made it will. Soon some Universal executive will finally realize that they need to cast Nicolas Cage as the ultimate Fast & Furious villain and we’ll get the franchise finale that we all deserve. Until then, let’s just hope this dumb party doesn’t end anytime soon.