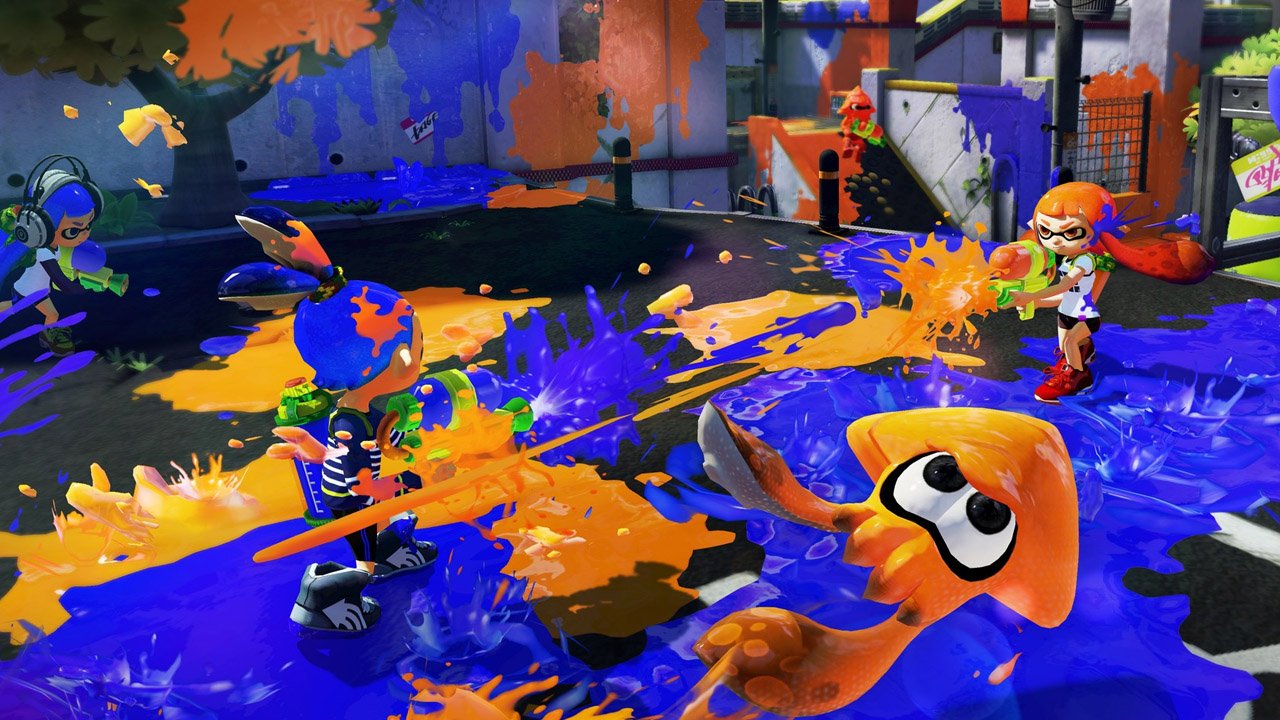 In some ways, depending on your gaming tastes, it’s tough being an adult fan of Nintendo. While there’s no arguing that Shigeru Miyamoto and his legacy of hits are the cornerstone of some of the medium’s finest moments, that same sense of timelessness can also hurt the company. Good game design will always be good game design no matter the decade, but Nintendo’s online policies? Those are in the stone age. Unacceptably so.

Splatoon is an upcoming competitive multiplayer shooter that has all the hallmarks of that classic, timeless Nintendo design. It’s cute, it’s easy to get into, and underneath the bright, cheerful, kid friendly imagery of shooting each other with paint, there lurks a very original 3

person shooter with a surprising amount of depth. While the game’s not yet out, every debut it’s had since last year’s E3 has been the same; journalists have been pleasantly surprised by how fun the game is, and how substantial the possibilities are for tactics and strategies.
However, because this is Nintendo we’re talking about, all this promise for the game comes with some strings attached. In a recent Interview with Edge magazine, one of the directors of the game, Yusuke Amano, reiterated that while Splatoon could be played online, there would be no voice chat available. The reason for that is very simple; when faced with potential toxic environment of online communication in shooters, Nintendo decided to just not deal with it all.

Admittedly, unless you have full time staff monitoring communication on servers, it really is impossible to prevent arguments, hostility, harassment and various kinds of prejudice from occurring during matches. Xbox Live is legendary for how unpleasant its online environment is if you’re female, non-Caucasian, non-Christian, non-American, non-heterosexual, or merely suspected of being one of the above. The PlayStation network previously enjoyed a milder reputation, but only because it wasn’t as popular as Xbox Live, and now that more gamers are moving over to the PS4 this generation, the same abusive tendencies are proliferating.

[quote_center]By instituting a policy of “no official voice chat” for Splatoon, Nintendo is saying to its audience, “We don’t trust you to behave yourselves.”[/quote_center]

Nintendo has always prided itself on being the company that people “grow up” with. Call of Duty might not be appropriate for children, but a Mario game always is. Splatoon, with its bright, cheery graphics, and emphasis on silliness rather than gore, is consistent with this vision. However, the competitive nature of the game, and the fact that at this juncture it appears to have a fair amount of depth going for it, all point to a game that adults can enjoy just as much as children. Unfortunately, adults usually have a decade or more of experience in bullying, prejudice and humiliation and some are unwilling to restrain that behavior online, even with children present.

So while Nintendo’s decision is understandable, it underscores a persistent policy at the company that its older audience finds increasingly more problematic. Nintendo has decided that if people are unwilling to police themselves, they will simply remove all possibility of misbehavior from happening. Simply put, verbal abuse can’t happen if everyone has their mouths taken away.

Of course, for victory obsessed team players, this policy doesn’t actually stop anything. Anyone with a computer and access to Skype, Ventrilo, or even the party chat software of the Xbox One and PS4 can still communicate with close friends as team mates, even if they can’t communicate with opponents. That will create a situation where those willing to go to such lengths will have a tremendous advantage over everyone else. But, whatever swearing or insults they unleash will be confined to their own private chat channel.

Obviously there’s no iron clad way to maintain online communication yet somehow prevent people from being jerks online. You can report and punish after the fact, but you can never prevent it from happening as long as people have the ability to speak. But eliminating the choice entirely isn’t the right solution either, and merely gives the more proactive, competitive players, an enormous edge when they resort to communication alternatives others won’t go to the same lengths to regain. By instituting a policy of “no official voice chat” for Splatoon, Nintendo is saying to its audience, “We don’t trust you to behave yourselves.” And that’s a poor marketing reputation to have, even if it’s justified by past examples.