Papercraft Yourself an Adventure with Tearaway Unfolded 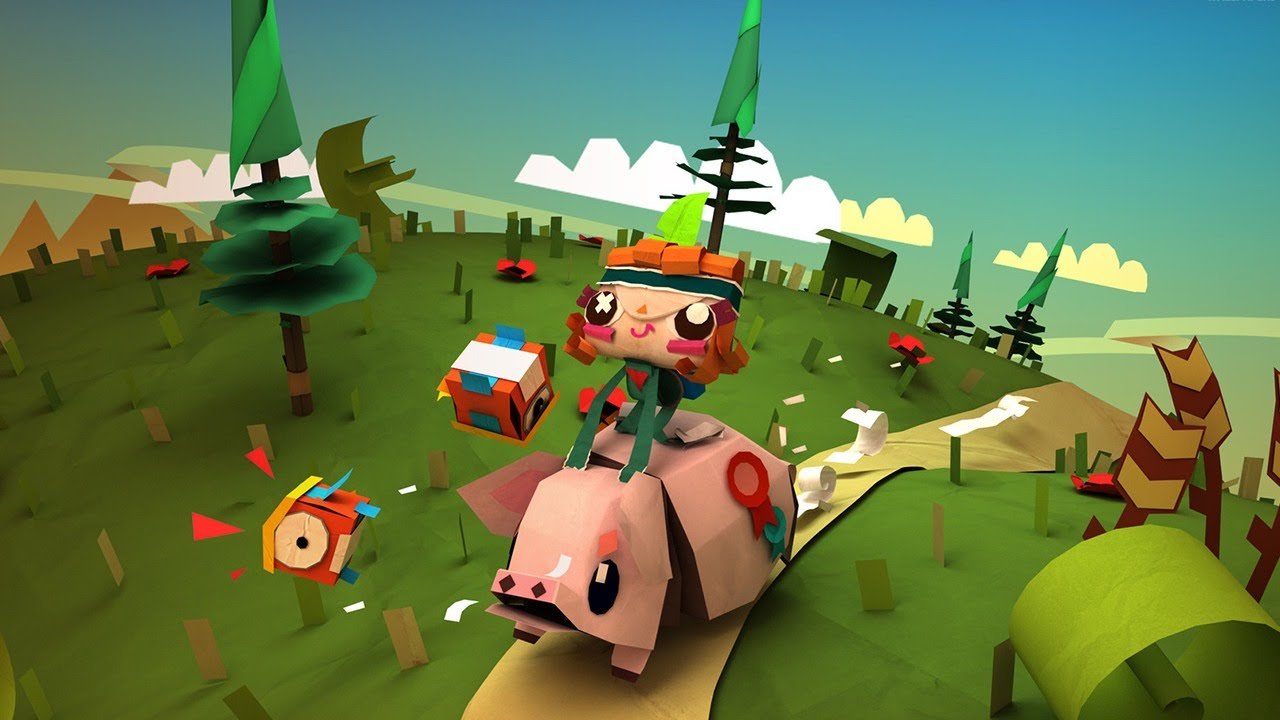 Media Molecule has a reputation for creating ingenious, texture-based games, most-notably LittleBigPlanet. A lesser-known but equally ingenious Media Molecule franchise is Tearaway, originally exclusive to the PlayStation Vita. Now, the papercraft-based gameplay of the original Tearaway is coming to the PS4 in a game made especially for the platform. Tearaway Unfolded isn’t a port of the Vita game, it’s an expanded experience specifically for PS4 that makes great use of the system’s unique controller features.
Since Tearaway involves a world made of paper, the player solves puzzles based on tearing, folding, and otherwise manipulating paper. A charming cast of characters and very cool gameplay mechanics made the Tearaway Unfolded demo a unique, charming platforming experience. The whimsical language of Tearaway is back in full force: the player is still called “the You”, and the male and female playable characters, Iota and Atoi, are also back.

The first interesting PS4-based mechanic I could try out was wind. No, this isn’t a fart joke, that’s South Park: The Stick of Truth. Using the Dualshock 4 touchpad, you can create gusts of wind that move parts of the paper environments. Just swipe in the direction you want the wind to blow, and platforms, passageways, and other environmental features that weren’t there before reveal themselves to help you on your way. The controller gyroscope is also used like the previous Vita screen to draw shapes out of paper, make things like snowflakes, decorate banners, and various other things. My snowflake turned out kind of sad, and my banner was a terrifying mess of eyes, but I had fun. These tools take a little getting used to, but in my opinion, messing up the first few was part of the experience: I was laughing by the end because my early creations looked so weaksauce.
Unlike LittleBigPlanet, Tearaway Unfolded‘s platforming environments are fully three-dimensional, so you’ll be jumping back and forth as well as side to side. Furthermore, the PlayStation Camera can be used to take snapshots you can then use as textures in game like the Vita version’s camera did. Puzzles are cute and character-driven, and utilize an interesting mechanic where the character on-screen tosses an object toward the screen. The game then makes as if the player caught it, and you can then use the PS4 gyro to aim it back into where you want it to go in game. It’s a really neat bit of immersiveness that engages in a distinct Tearaway sort of way, so if you haven’t played the original, this is a great way to discover this IP.

If you have played the original, on the other hand, I think there’s enough new here to make it worth your while. It is a retelling of the Tearaway story, but… oh who am I kidding? There are far more people with PS4s than Vitas, and the existence of this game reflects that reality. You probably haven’t played Tearaway, so the Vita’s failing is the PS4’s gain in this case. If you’re looking for a unique, challenging, all-ages game, Tearaway Unfolded is a refreshingly different console experience while still feeling familiar in terms of Media Molecule’s “for kids of all ages” tone.