Rise Against the Empire in Disney Infinity 3.0 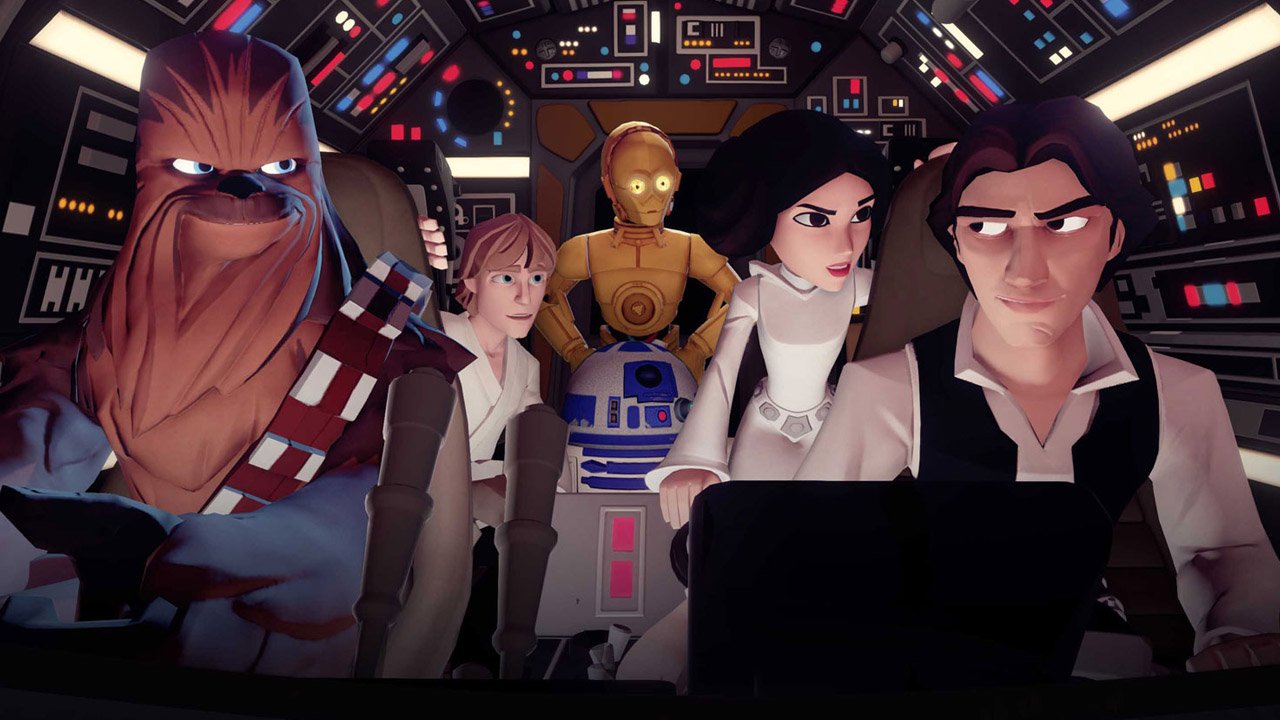 There was one thing and one thing only that drew me to Disney Infinity this year: Star Wars. Fortunately, there’s a lot more to talk about with this year’s version of Disney’s lucrative Toys to Life franchise, but let’s start with the basics. Yes, the basics involve Star Wars.
There are two main Star Wars Play Sets for Infinity 3.0, Twilight of the Republic – a Jedi combat focused play set with the characters and settings of episodes one through three – and Rise Against the Empire – a more vehicle and blasters focused experience with the cast and locales of episodes four through six. There are a couple of super cool new things to talk about beyond new toys here: Ninja Theory (Heavenly Sword) improved the combat, and the toys are finally cross-compatible between the two Star Wars Play Sets. The decision to keep the play sets locked to canon characters has historically been an artistic choice, not a technical one, for Disney Infinity and apparently George Lucas’ influence finally made it possible to swap figures in the Star Wars stuff. You heard it here, folks: George Lucas has done something good for a Star Wars product… possibly for the first time in twenty years.

Figures for Twilight of the Republic include Anakin Skywalker, Obi Wan, Darth Maul, and Clone Wars character Ashoka Tano – Ashoka and Anakin come bundled with the starter pack. Rise Against the Empire features Luke, Leia, Han, Chewie and Darth Vader. Yoda is technically the version from episodes one through three, but I have trouble separating him from the original trilogy. There’s also a timed exclusive Boba Fett bundle for the PS4. There’s even a Force Awakens Play Set referenced on the website, and there will probably be some new characters connected to that.

Playing Star Wars in toy form was a real pleasure, and I immediately stopped playing the game “properly” and just started mucking around like an eight year old, crashing speeder bikes into things and trying to jump on Lando Calrissian’s head. A power disc-swapped Leia’s costume to her bounty hunter disguise, which I thought was cool. Cooler, however, was the way that Infinity 3.0 managed to capture the majesty of classic Star Wars space battles while still making the physics of the vehicles wobble with the lightness of plastic instead of the heaviness of metal.

But there’s more!  Disney Infinity 3.0 isn’t just about Star Wars. There’s more stuff to do with your existing Disney and Marvel figures (including some new Marvel Play Set down the line), and new stuff based on Pixar’s Inside Out. The Inside Out Play Set is a puzzle platformer, which is a nice gameplay change-up. Over in the Toy Box, Disney is introducing something called “Toy Box Games”, mini campaigns more substantial than what people have sampled in the past, in a format that’s easier to find.  Two examples of these Toy Box Games were on display, A dungeon crawler called Villains Takeover, and Toy Box Races which features kart style gameplay. Toy Box Games are playable with all existing Disney Infinity characters. Oh, and in the Toy Box, all characters get to play with Lightsabers!
Disney Infinity 3.0 will be available on Xbox 360, PS3, Xbox One, PS4, and Wii U, and you do not need a new Disney Infinity Base to play 3.0. Release dates for play sets and figures vary beginning in Fall 2015.