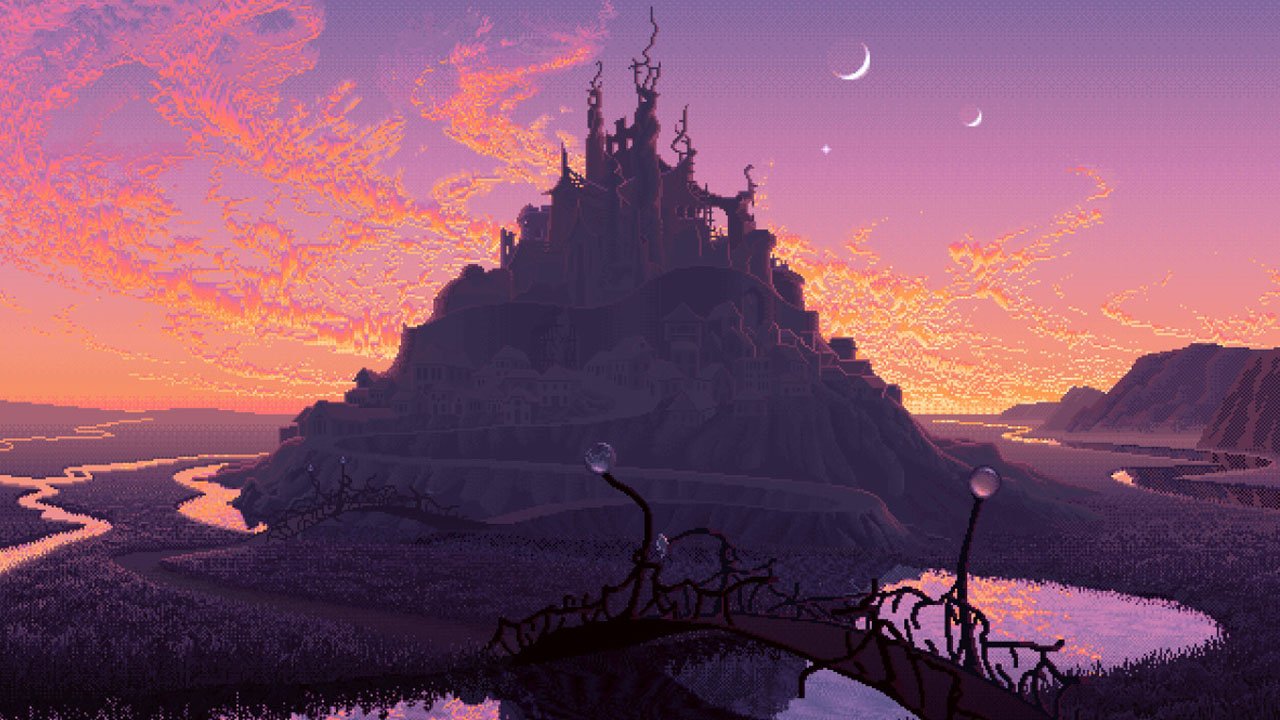 The world of videogames is, by necessity, driven by the technology used to create them. One can be an absolute expert and a highly sought after master of a certain tool, only to find one day that the industry has moved on to something new, and that for all their skill and expertise, they are no longer needed. However, despite the constantly evolving instruments used to create an imaginary world, at the end of the day, it takes an artistic and creative mind to realize these visions. Mark Ferrari is just this type of individual. Mark was the creative force behind many of the most popular adventure games that boomed in the late 80s and early 90s. Classics like Loom and Monkey Island are among a few of the games that Mark had a hand in crafting. His story is one of ups and downs in an industry famous for its undulating nature, and how in spite of its reliance on the newest and fastest processors, will always have a place for solid, original, and stunning artwork.
Comics & Gaming Magazine: Hey Mark, so your first major gig in the gaming industry was working for Lucasfilm Games. How did this partnership come about?

Mark Ferrari: I put a portfolio of sci-fi and fantasy art together and someone told me about this convention, so I went. I then acquired the attention of a number of those prominent illustrators who wanted to know who I was and where I’d come from out of the blue. One of them was a very gracious fellow named Tom Kidd who was the artist guest of honour at the convention and he took me under his wing and, among other things, introduced me to the Art Director from Lucasfilm who had seen my work and was intrigued. That was Gary Winnick, with whom I’m working with again for the first time in many years on Thimbleweed Park. Gary said that they would be interested in having me come out and do a test to maybe do some art for computer games. I told them that I‘d love to but was a technophobe who had never touched a computer before. To which he replied that they preferred to find good artists and teach them to use a computer instead of teaching a programmer to make art. Those guys are geniuses but couldn’t art their way out of a wet paper bag. They took me out to Skywalker Ranch, and I passed their test.

CGM: You’re a pioneer in many respects, but one of them is the “dithering” technique. How did you come up with this?

The first game I worked on was Zak McKracken and the Alien Mindbenders, with Gary Winnick and Ron Gilbert, with whom I’m working with now on something that is very much like what I did back then. I was also working with Steve Purcell and Ken Macklin. Games then were much more low-res than they are now, and you only had 16 colours to work with. These weren’t 16 colours of your choosing, but 16 pre-selected colours that were THE colours used on all games, and these had been chosen by programmers who were not artists, by simply sliding the RGB number at even intervals up and down the scale. That made sense to those programmers because they were equal numeric intervals and they were horribly acid, unnatural colours that were virtually useless but that’s what we had to do whole games in. Knowing nothing at all the first thing I did with start checkerboard dithering them to come up with more useful colours, kind of like mixing paint. The CRT monitors in those days were blurry enough that the checkerboard dither blurred into a solid third colour. But I hadn’t been doing it for more than two hours before Ron and his programmers came flying in and told me with great angst that I could not use dither because it couldn’t compress. The day we wrapped the project I drew a picture of a twilight scene of a moonrise over ridges of live oak covered hills in 16 colour dithered art and just left it on my monitor as a kind of silent protest when I went to lunch. When I got back from lunch, Steve Arnold, the head of games division at that time and Ron Gilbert, of Programming, were in a heated discussion about why dither couldn’t be compressed…and within two months dither could be compressed. So we put out Loom with all dithered backgrounds and although it wasn’t a huge commercial success at the time, it was a huge critical success and dither became the new house style for Lucasfilm Games.
Once the games division separated from Lucasfilm, the studio left Skywalker Ranch to set up shop in a cubicle-filled office building that shared space with an insurance company. This shift, and the hiring of cold and calculating bean counters as management caused Mark to seek greener pastures.

The bean counters began to make examples of creative people who did creative games that didn’t sell. Some very good directors were laid off, and other people were publicly humiliated and punished even though they got to keep their jobs. At that point I realized the golden days were over, and I had a great reputation as an artist and there were a lot of other companies that would be happy to work with me, so I stopped working there and went freelance. Operating on Skywalker Ranch meant working a lovely cluster of farm buildings and eating lunch in a big mansion every day with celebrities sitting across the room- working for Lucasfilm Games in the Allstate building meant sitting in a cube under pressure from bean counters who didn’t think that we were making enough money. I went off to work for a bunch of other people, but did very little that was as creative and important as what I was doing in Lucasfilm. I was making much more money to do projects that were costing and selling a lot more, but none of them are things we remember today.

In 1996, almost every studio in the industry switched from 2D to 3D CAD systems for game design. For a guy like Mark, at this time the most highly sought after 2D artists in the industry, this spelled doom.

When Gary found me for Lucasfilm, I was an emerging commercial artist, and pretty much the entire time I’d been in the gaming industry and at the height of my career in the 90s, I was one of the most sought after 2D artists in the industry. I was beating away employers with a stick. I was one of the only people in the world that could do some of the things I was doing with colour cycling, and for a little while that was relevant. But the advent of 3d CAD system made all of that instantly irrelevant, and with it, myself. My career ended in 1996 when the entire industry adopted the CAD system and it became affordable enough. In a single year it went to 3D rendered art. At that point, everyone who had begging me to work for them for years told me they were “delighted to hear from me” and that they were sure they had something for me and I’d be hearing from them soon. No work for five years, none at all, because the things I was famous for was 2D art and my style looked better than everybody else’s. CAD rendered art is all drawn by the same set of algorithms so that didn’t matter anymore.
After working for a “junk-merchant” developer in Seattle, and becoming disillusioned with the low quality, marketing heavy and corporate controlled state of the industry, the mobile gaming boom and explosion of Indie studios brought Mark back to the forefront.

I think what’s happening now, part of the reason for this nostalgia movement is simply that the online options for bringing developers straight to their audience without the gatekeepers preventing you from getting into the store or getting distribution, there’s too many ways for too many people to find out what’s happening outside the corporate environment. Now that people know there’s something else out there, the mediocre cookie cutter stuff is doomed. Everybody is turning elsewhere now because elsewhere is finally visible. Interestingly enough, the first place people are turning is the last era where games were “fun”. Part of the reason for the nostalgia movement is now that people are aware there are alternatives they’re looking back on their own experiences and remembering that golden era of adventure games.

Mark is still doing art, and still writing, and is currently working with his old comrades Gary Winnick and Ron Gilbert on a new game, Thimbleweed Park, that aims to recapture the fun of the point-and-click adventure games they worked on in the early days of the gaming industry.

For more information on Mark’s Art, check out his website www.markferrari.com