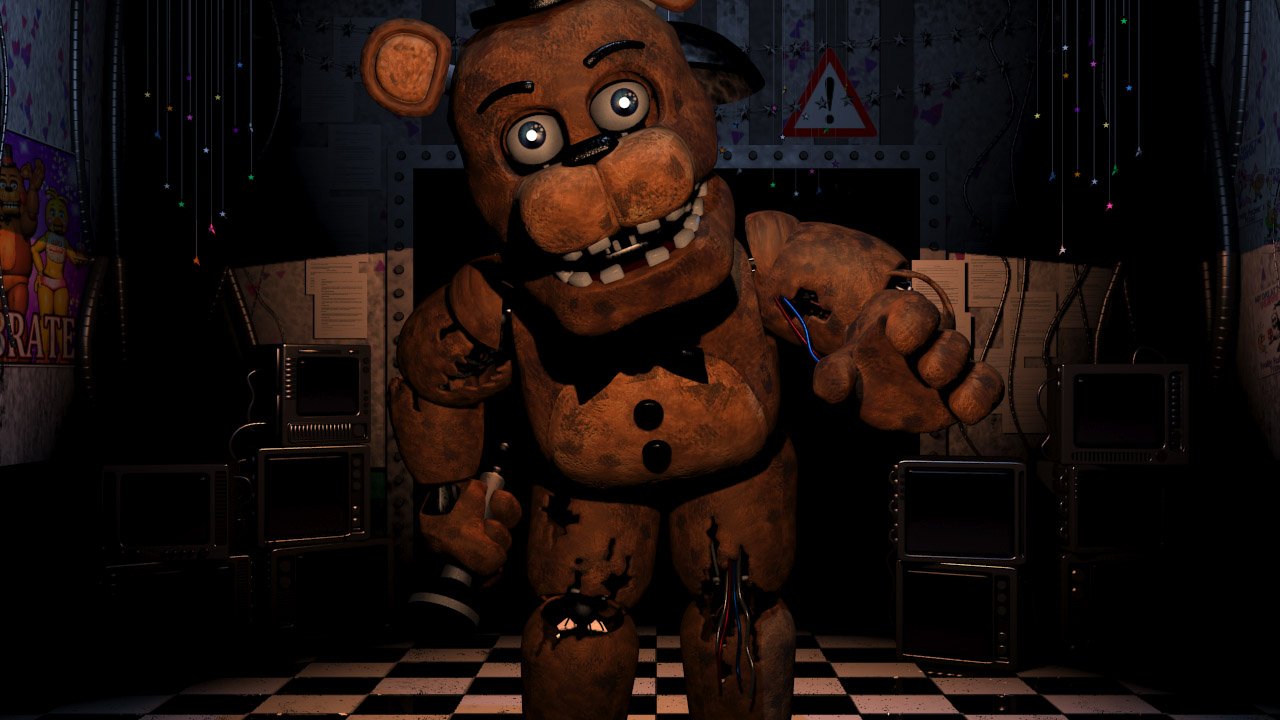 In college, I spent two years as a dorm proctor, meaning that I sat in the lobbies of buildings for hours at time, making sure nobody went in or out without proper identification. It was a thankless position, especially when I was stuck behind a desk for seven hours with little to do, trying not to fall asleep to the sound of whirring fans. There was usually a little room to walk around, though, and when nobody was around, I would do stretches, pace a bit, and stand up and get feeling back in my legs. I wasn’t stuck to the chair; at least I could move, even if I wasn’t allowed to leave.

When I played Five Nights at Freddy’s for the first time, there was a sense of familiarity. I understood the boredom and low wages of a security job; how a ringing phone was relief, how the powered-on fans almost tried to put you to sleep with their endless buzzing. But something made me feel uncomfortable. The player avatar never moved. Instead, he just stayed in his chair as moving mechanical creatures would try to invade his office. He could move his head, push buttons, and check cameras, but that was about it. Even when his life was at risk, he couldn’t leave his post; he instead had to run out the numbers on the clock.

Five Nights at Freddy’s is pretty clever. Apart from the fact that developer Scott Cawthon has created a theory-driven community through his simple, short games, he has also managed to subvert one of the most assumed game mechanics: walking.

Even in horror games, the player is allowed to move. The environment can be limited to create an inherent claustrophobia or terror, but the player is usually allowed to run. Games like Slender or SIlent Hill: Shattered Memories rely on the act of escape for their chief scares, increasing the tension as the player frantically flees for their life. Even if you’re in a confined space like the woods in Slender, you still have the option to keep moving, feed off your fight-or-flight instinct, and run away panicking.

The Five Nights at Freddy’s series erases that completely. You can’t run away from the possessed animatronics, nor can you decide you’re going to leave the restaurant (even though every bit of logic says that you should just quit that terrible job while you still have your head). You have to sit there and face the creatures that will try and stuff you into a costume, right up until the time runs out. You have to master the strategy to keep them away and make it through the week; you can’t ignore it.

It’s such an obvious thing to talk about movement when it comes to games, but rarely do we see it almost completely removed.

What this accomplishes in Five Nights at Freddy’s is ensure that you face the creatures for the full time period. You aren’t allowed to run away and avoid the enemies like you would in a shooter or a Silent Hill game, you have to face them and the only way to do that is to micromanage the office. There is an immense amount of strategy involved in keeping the doors closed for the appropriate amount of time, but this is your sole focus. Becoming involved in the act of monitoring power, closing doors and vents, playing music boxes, or whatever Kaufman has you doing in each installment is stress-inducing enough, but with the bonus of not being able to just escape, the pressure is even greater.

This changes a bit in the fourth instalment of the series, which features a child running from one side of his bedroom to the other in order to check doors and hallways for monsters. Regardless, you are a weeping toddler that is not allowed to leave his room, locked away to face the Freddy’s Fazbears nightmares alone. In the previous three games, the player is facing the animatronics for a small paycheque that, in reality, might not be worth the exhaustion after finishing a night. In the first game, you get paid $120.50 after completing six nights, which is presented more as a joke than an actual reward. The first three games are laced with a dark humor that can ease the tension of the gameplay. The fourth game, without spoiling anything, is a tragic reveal of a key moment in the history of Freddy’s Fazbears and is anything but funny. It’s the only game that gives you a logical explanation as to why the player just can’t leave the static room, and that only manages to up the terror factor. You are truly stuck.

Alone, for the Oculus Rift, employs a similar premise. It’s a game within a game where the player puts on a VR headset to play a game in their living room. However, things start to skew when you start to hear sounds and see movement out of the corner of your eye. The Oculus Rift blurs the line between the two realities, but an added feature in Alone keeps you on the couch and playing your game. You are forced to sit and listen to the world coming apart around you. Without quitting the game and removing the headset, you are stuck in the world.

One efficient way to induce scares in anything is to give the audience a reason to feel trapped. Whether it’s in creating a closed environment or designing a scenario that needs to be completed, In both Alone and the Five Nights at Freddy’s franchise, player paralysis makes sure that you confront the horror elements. You can’t shield your eyes with your fingers, and unless you leave the game completely, you can’t escape. You have to wait out the clock, hoping that somebody will come and relieve you of your duties. You can’t walk out and you can’t leave your desk; you have to survive.