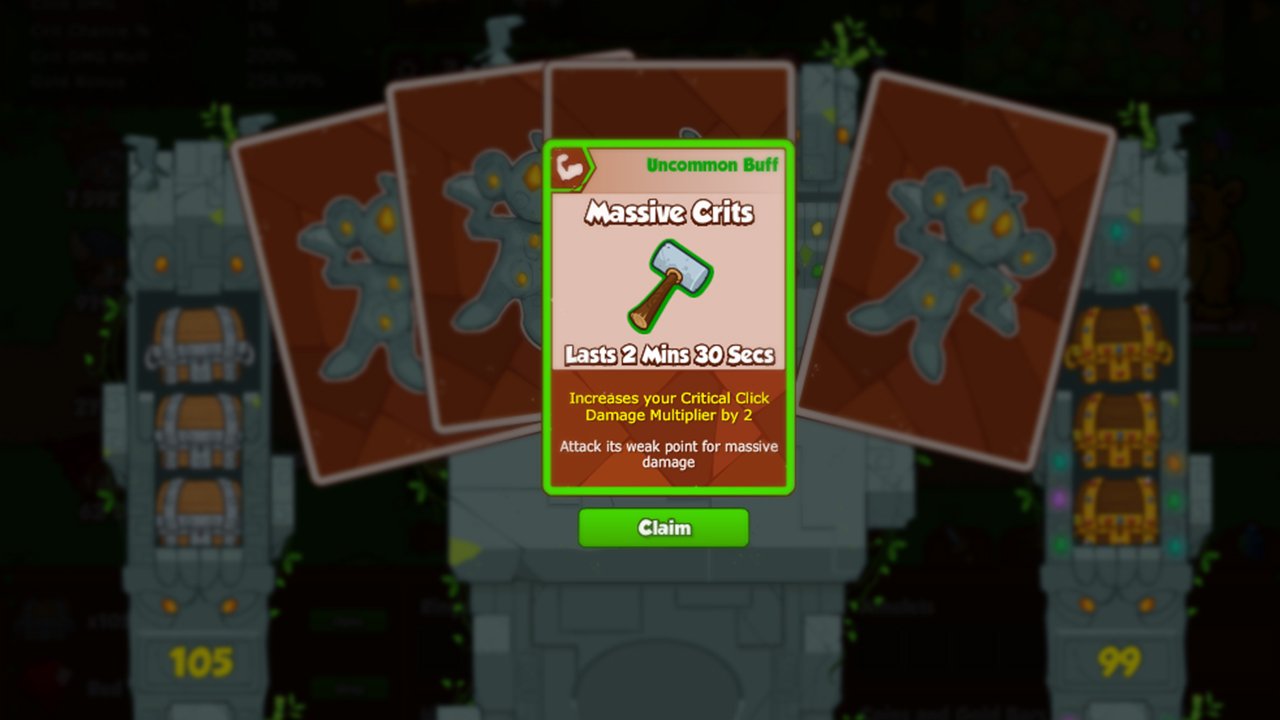 Idle games have begun to gain a lot of traction in the gaming sphere. While some may consider these a mindless distraction saved best for your phone during long commutes or boring meetings, other have risen to the task of creating more elaborate experiences with a familiar formula present in many old RPGS. Eric Jordan, CEO of Codename entertainment is one such individual, and CGMagazine spoke with him to get a better sense of his idle game Crusaders of the Lost Idols.

CGMagazine: So, I’ve been playing Crusaders and I’ve got to admit, it’s pretty addicting

Eric: Haha, I like to think it more like “passionately engaging.” It’s a very compelling sort of core loop game.

CGMagazine: Which is weird, because I never really saw the novelty in stuff like Cookie Clicker and Clicker Heroes, and then I started playing this and I thought “Ok, there’s a lot more to this.”

Eric: I think what’s interesting about idle games, like the sort of first “idle game” is a commentary on Everquest. That sort-of core loop of MMORPGs like Everquest, WoW where I get a quest, I go do some thing, I turn in my quest, that makes me more powerful, I get another quest, I go do something, ect. So for that kind of kind of core loop we figured you could replace all of that with just one button. You just kind of click, click, click, click and each of those things happen.

CGMagazine: So what is it you do as the CEO at Codename Entertainment?

Eric: Well I guess the overall thing is to manage the business. To plot out what makes sense for us to do, what doesn’t make sense. Kind of help out in a variety of things. My kids say I just spend a lot of time in meetings, on the phone, and writing emails. And then I have the real pleasure of working really closely on Crusaders; helping to guide the creation of that particular game through a bunch of different stages. I sat in a whole bunch of playtests that we did for the game, and got to watch lots of different players experience the game and get a sense for what they understood, what we thought they’d understand and they didn’t, and what we needed to change.

It’s actually a really interesting process. I think it’s something like watching a video of yourself giving a presentation. You kind of cringe watching yourself; it’s somewhat similar in watching someone play a game that you had a hand in designing because things you think are obvious and intuitive people completely struggle with because it’s not obvious and intuitive at all, and you’re like “oh my god, why did I design it this way?” So it’s a really great process because it helps, I think, to refine the game experience so that you’re delivering something that you actually want to deliver. But it’s a very humbling experience as well.

CGMagazine: And how involved were you with the development of Crusaders?

Eric: It’s kind of varied; with Crusaders I ended up spending a lot of time, especially interfacing with a player advisory council that we have. We have three operational games and we have player councils for each of the games. At the time we had one for Bushwhacker 2 that I was interfacing with around Crusaders because we hadn’t formed that council yet. So interfacing with all those people and, I think I sat in on 45 different playtests. Then iterating that back into the design process, so yeah.

Eric: Well I want to make games that we want to play. The thesis that I have, sort of around broader business but also specifically for us at Codename is that, as a business you really need to understand who your customers are. You need to have a really good sense of what they like and what they don’t like. There are lots of ways for businesses to do that, however a lot of those things, for small companies, are really hard. Like, doing focus groups, or buying expensive industry research, or getting private research commissioned for you; there’s lots of things you can do but it’s expensive and difficult.

You can kind of shortcut through all of that if you’re like “We ourselves are concentrated enough to represent a particular market.” For us really, being core kind of gamers, pretty much every single person we have falls in that “core gamer” definition. So if we focus on making games that we want to play, then by extension they should be games that other core gamers want to play. It also helps us to sidestep that whole question of “what would a core gamer find funny?” Because we put a lot of humor in our games, and where is it over some lines or not? A lot of the humor that’s in Crusaders is stuff that we say in the office anyway. So it becomes a really good touchpoint for the company when you’re building a game.

CGMagazine: With Crusaders why did you choose the “free-to-play” model?

Eric: It’s really what we know. “Free-to-play” is something that we’re quite comfortable doing so we’re playing to our strengths. The second thing is, one of the things that that goes along with “free-to-play” is games delivered as a service. So if you play Crusaders you’ll see that we have events, we just finished the Halloween event, we’ve got new content going out today and we’ve got content lined up for Thanksgiving; so we’ve got all this new content rolling out and it’s something that we have just honed over other games that we’ve worked on and it’s a way of playing at what we really enjoy ourselves. Kind of engaging with something over time as opposed to buy a closed experience.

Actually I was reflecting on it the other day, thinking about how in many ways it’s kind of strange to ask a customer to spend money on something before they’ve had a chance to really experience it. As compared to a “free-to-play” model where you can play it, and then if you really like it and you think it’s worthwhile, then you can spend money on it. But you don’t have to spend money on it if you don’t think it has value.

Eric: I think it’s a balance. It’s an odd thing when people say that. You look at DOTA or LoL or TF2, these are massive games, and they’re all “free-to-play” so I think core gamers will embrace the “free-to-play” model when you look at those kinds of games. I think the trick is just to do it in a way that doesn’t feel exploitative. Where people understand the rules of engagement on one end and do feel like “Oh, you told me it would be one thing and now it’s something different, and I thought I was going to have a good experience but the reality is if I don’t give you money I’m not going to have a good experience?” I think the problem is when people feel like there’s been a bait-and-switch and one idea has been sold to them and a different idea is what they encounter when they play the game.

CGMagazine: Tell me a little bit about what went into some of the decision making in Crusaders? What sparked its creation?

Eric: Well, we’ve been working with Kongregate for many years now and we started to notice that there were a lot of idle games that were getting very popular on that site. We had played a bunch of idle games before that and were seeing a bunch on the site and we thought “well this is kind of fun, I wonder if we could do something like this.” It was honestly, a sort-of side-of-the-desk project where we thought about it, set it down for a while, then talked about it some more, then set it down for a while. We did that off and on for about six months; doing some prototyping and thinking about what we could do that would really be different. Something that hadn’t been seen before and would be really fun.

And when we had a working prototype where you can see the crusaders moving across the screen, the monsters coming at them and you had the formations and everyone in the office was debating about which formation was the best. And when I watched everyone who was making the game arguing about what was going to be the best, I thought we’ve got a game that’s real simple, but it has this real depth to it if you wish to go there. And that was the first moment where I was like “wow, this could be pretty awesome!”

CGMagazine: I noticed that a game like Crusaders would be perfect on a mobile. Does Codename have a footing in the mobile sphere, and if not, will it?

Eric: We do not, and we hope it will with Crusaders. We have plans to make mobile versions of our games, actually we’ve started work on a mobile version of Crusaders. Because I’ve actually wanted to play it on my phone or tablet and I’m like “gahh, that’d be great!”

Yeah I kind of want to be in line for my coffee and just check in on my crusaders, do a couple levels or a mission and get my coffee and move on. I think it depends on the play style and how you like to play. One of the things I think has worked really with Crusaders is you can play it in short bursts, which would lend it well to a mobile experience. But you can also sit down and have quite long sessions and moving crusaders around and optimizing your formation and focusing on more active play for harder places like boss fights.

CGMagazine: What is the future for Codename Entertainment?

Eric: Well I think in the simplest sense it’s to continue making games that we love to play ourselves. That’s really the joy of getting to be something you really love and getting to do it with a lot of people who really love it, be they players, people you work with. Something I really think is interesting about idle games as a genre, and something that we’ve found really surprising; it’s a genre that’s very much born from the players wanting to play idle games. So people making idle games and people liking them and people making more complex idle games and people liking them and it’s not like a corporate initiative, it’s really a grassroots genre that I think in spite of not really having a lot of coverage has become popular in a whole bunch of different really large markets. But they’ve gotten really popular because people like them; they’re games made by gamers. I think that really speaks to the strengths to where the genre can go.

CGMagazine: Now, I’ve got to ask. Is the name inspired by Indiana Jones?

Eric: Of course it is! Absolutely! There’s a huge amount of pop-culture references in the game and there’s definitely some Indiana Jones references throughout it; snakes and other things (haha).