Explore the Break at Quantum Burger in Downtown Toronto 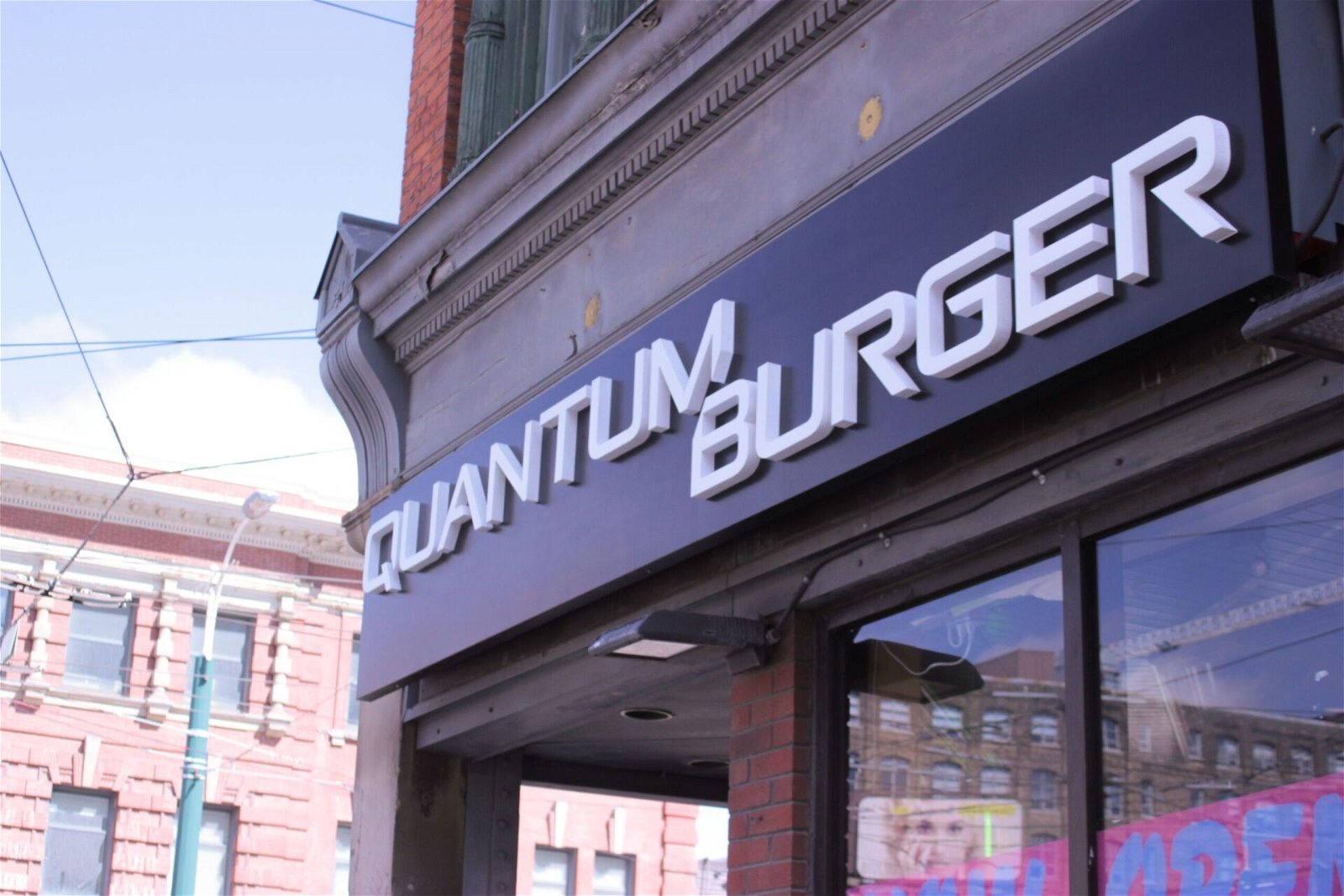 If you’ve spent any time around Queen and Spadina this week, you might have noticed that the storefront that formerly housed a Hero Burger is now occupied by yet another pop-up by the name of Quantum Burger. Unlike the other pop-ups that seem to have flooded the downtown core recently, you won’t find an overpriced, organically sourced, in-house cured, artisan entré. Instead, you’ll enter a mysterious moment frozen in time with mysteries to unlock. You have entered the Break.

Quantum Burger is a unique marketing installation created by the team at Xbox Canada to promote their newest third-person shooter title Quantum Break, which launched this Tuesday. A time travel experiment gone wrong causes fractures in time and grants protagonist, Jack Joyce, voiced and played by Shawn Ashmore, and antagonist Paul Serene, voiced and played by Aidan Gillen,  the powers to manipulate time. Jack must use his newfound powers to find a way to fix this apocalyptic disaster while being pursued by the mysterious Monarch Solutions, a corporation set on thwarting Jack at every turn. Quantum Break combines gameplay and interspliced episodes of a digital TV series to tell its dark tale.

With a story that rich, Xbox Canada took this as the perfect opportunity to create this immersive space in order to bring the world of Quantum Break to Toronto. CGM spoke with Christina Verdurmen, Senior Marketing Manager at Xbox Canada about this unique space.

“We were really lucky in that the franchise, or rather the title itself, being so new, had a really great, immersive cinematic narrative that we were able pull from,” Christina told us. “The theme is centered around ‘time is power’ and the game features breakdowns in time, and time fractures. We were able to leverage that to create this living, breathing time stutter people could fully interact with. As you look around there’s all these little clues that you can immerse yourself into, to bring the game to life in that way.”

Upon entering, guests of the space will see a robbery-in-progress that was halted by a fracture in time. The thief is dramatically thrown against the front window, suspended among the tables that float around him. The theme is echoed throughout the former Hero Burger, as every nook and cranny holds something to play into this scene.

“We want to make sure that we stay true to the spirit of the game,” Christina continues. “This title is very Noir, so keeping that aspect of it was really important to us. We didn’t want it to be campy or a cheesy moment in time. We wanted to really ensure that the mood was right. We went through a number of revisions, and we kept building and building until we had it absolutely right. We had an amazing agency, Mosaic, that brought this to life for us and a great production team to help us out with that as well.”

As you explore, you will find all sorts of details that tie into a scavenger hunt style game for visitors to play. Exploring will earn you a chance to find Xbox codes, preview gameplay, and prizes.

“Microsoft always tries to do something that the fans will really enjoy,” Christina explains. “So in order to appeal to our fans, to be able to come and see something from outside of just demo-ing the game and getting a hands on, we’re trying to get them to feel like they are a part of that game and a part of the campaign overall. The great thing about the location is that we were also able to broaden out our reach for the title, to generate excitement and awareness from more of a blockbuster entertainment fan, in addition to our traditional gaming fans.”

If you are unable to make it in person, Xbox has taken care of that. Today they launched the second in a series of three 360 degree videos on YouTube that allow you to experience the Break and find more clues outside of the space.

“So that all of our fans from across the country could participate in the space, whether you’re here or not, we created 360-degree videos that live online. They walk you through the space with a 360-degree view. And there are clues in those videos that are separate from the clues you would find in the space here. They will then lead you to a contest entry for a custom console and game. So that extended the reach of the program across the country as everything was filmed in here.”

Your last chance to visit Quantum Burger before it closes is Sunday.