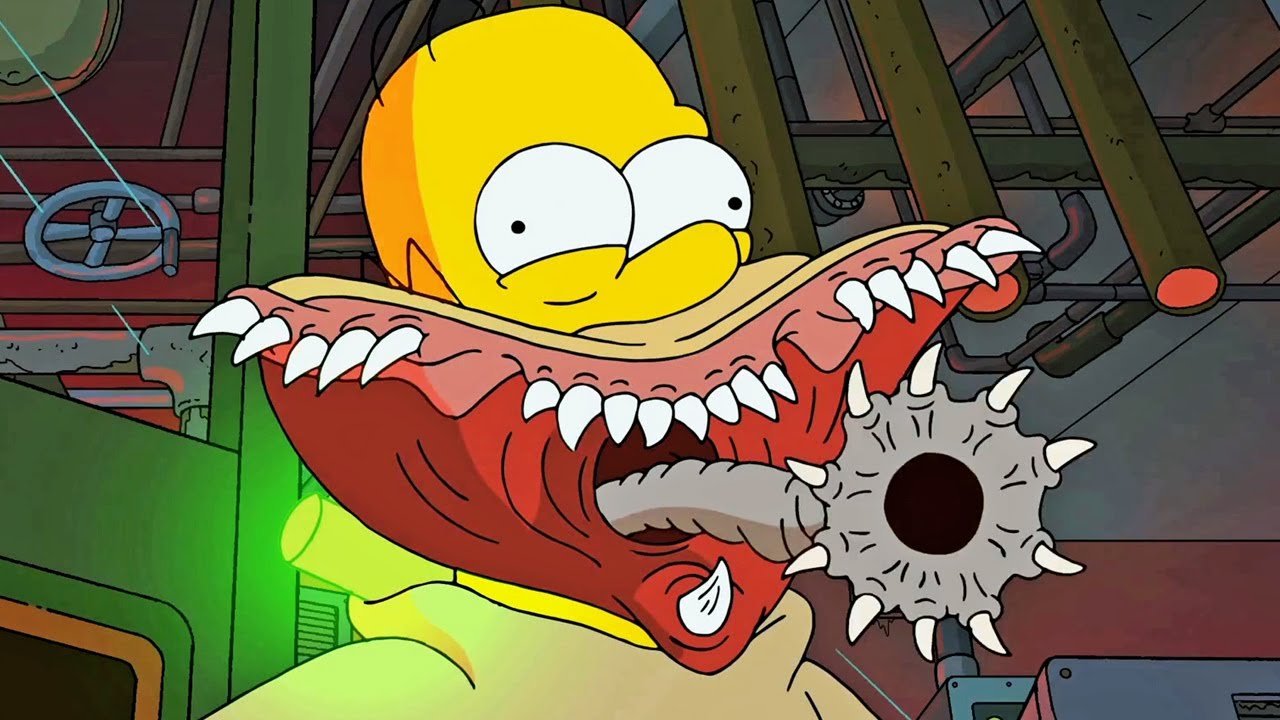 Halloween is here again, which is great news for anyone who likes ghosts and goblins and horror movies and novelty candy. It’s the one season when everyone gets to pretend they love such things, at least for a few weeks. That includes TV broadcasters and creators, who tend embrace a little spookiness in October out of desperation to fill a timeslot. That’s led to a grand tradition of Halloween TV specials, weird one-offs, and special episodes that bring horror to the small screen in small ways for a few days.

There have of course been many brilliant bits of Halloweenery broadcast to your talking picture box over the decades. That goes without saying. We are going to limit this celebration of Halloween specials to just a top ten list though. Now, that’s not necessarily individual episodes (otherwise this may as well just be a Top Ten list of the best Simpsons’ Halloween specials). No, no, we want to spread it around. These are ten delightful bits of classic TV Halloween boofoonary that will help get you in the holiday spirit out of sheer nostalgia (you’ll practically be able to taste the candy corn that was stuck in your teeth while watching these old oddities).

Note: This list won’t include It’s A Great Pumpkin Charlie Brown because as everyone knows, Peanuts went out of style decades ago and there’s no need to pretend otherwise!

Be sure to check out our other spooky lists to get you in the Halloween spirit.

Here’s a little something that is too often forgotten. Rankin/Bass, those imaginative stop-motion pioneers who were responsible for all of those creepy Christmas specials of your childhood actually made a Halloween special. All of the classic Universal monsters appear along with the voice of Boris Karloff and for some reason Phyllis Diller. Now, it should be noted that the folks behind the special went out of their way not to be too frightening for kiddies and followed some of the most irritating trends of old timey variety shows for some inexplicable reason. It’s not Rankin/Bass classic like Rudolph, but Mad Monster Party is such a deeply strange relic from a lost era dripping with cutie variations on old fashioned horror staples that you can’t help but be charmed by this strange experience. Plus there’s no way that Tim Burton and the good folks at Laika weren’t highly influenced by this thing.

It’s hard to remember just how groundbreaking Roseanne was back in the day. Sure, it feels like a sitcom relic with it’s laugh tracks and morality plays now, but in the 90s simply seeing a family that didn’t feel curated for mass appeal was a shock. Every Halloween the Roseanne gang loved getting into the holiday spirit with increasingly elaborate haunted houses and costumes for the fam that never ceased to be friggin’ hilarious and imaginative. There were the occasional fake scares and pranks as well. More than anything else, it was a reflection of how dysfunctional families love to get dark n’ crazy on Halloween and just another time that Roseanne offered more of a reflection of its viewers rather than a window into an impossible suburban fantasy.

There is an entire generation of children out there who don’t want to admit that they were once scared silly by a Garfield episode as children. It happened though. That lasagne-loving feline took a brief break from his usual jokes about naps and downer Mondays for a tale of trick r’ treating and a haunted pirate ship. Now, the show is certainly dated and is only scary in the way that Scooby Doo is scary (i.e. only if you’re a tiny child, overly impressionable, or intoxicated). But for those who were the right age when they caught Garfield’s Halloween Adventure, it’s definitely the most embarrassing TV special to ever give them nightmares. Not me though obviously. This is all theoretical, you see.

7) Gary Larson’s Tales From The Far Side

For those who can actually recall a time that they read newspaper comic strips, Gary Larson’s The Far Side was a special introduction to surrealism, irony, sarcasm, and all other forms of deeply bizarre humour. The guy was allowed to bring his strange vision into animation only once for a Halloween special, and once seen the results are never forgotten. Entirely dialogue-free and filled with one deeply twisted image after another, Gary Larson’s Tales From The Far Side is one of the strangest damn animated shorts that you’ll ever see. The fact that it ended up on television at all is kind of amazing. Thankfully, networks considered Halloween a rare opportunity for morbid entertainment for the masses. So this bizarre cartoon nightmare exists and if you’ve yet to sample its uniquely twisted comedic charms, then buckle up. You’ll never forget whatever the hell this thing is.

Trey Parker and Matt Stone may not have stuck with their annual Halloween specials, but dammit they got some good ones in over the years. Cartman dressed as Hitler, evil twins, Chef leading dancing zombies, a costume party in hell, a haunted Blockbuster Video, the horrifying face of Barbara Streisand – South Park delivered plenty of absurd Halloween shenanigans over the years. Sure, the episodes are never exactly scary, but Trey and Matt certainly made sure they were extra tasteless for the most morbid of holidays. After all, the duo did turn the genuinely horrifying trio of serial killers Ted Bundy, Jeffrey Dahmer, and John Wayne Gacy into a Three Stooges for the 21st Century with additional gory murders and necrophilia. God bless Trey and Matt for that special holiday treat.

The British comedy troupe The League Of Gentlemen have never quite caught on in North America like they have in the UK, but for the best possible reason: the writer/performers mix comedy and horror until they become indistinguishable and that’s a tough sell for most folks. Pretty well any episode of The League Of Gentlemen or the follow up series Psychoville would make for fine Halloween watching, but Reece Shearsmith and Steve Pemberton were kind enough to make a specific Halloween special for the holidays filled with even more murders and scares than the average episode. A filthy clown, a mother/son murder team, a psychotic housewife: these are just the heroes of the stories. They get even darker (and funnier) from there. The show was designed to stand alone, so if you’ve never heard of Psychoville or The League Of Gentlemen, this is a perfect place to start. There’s nothing quite like these bizarre British chaps’ mix of laughs and scares.

Joss Whedon made a number of Halloween specials during his time on Buffy. That just made sense in a horror/action/comedy designed for teens. All of them were fun, and some were downright hilarious (like the episode where the whole gang were transformed into their Halloween costumes for the night). However, the best one wasn’t even specifically set on Halloween. It’s “Hush”, a tale of deeply creepy floating demons who robbed the town of their voices and ate their victims’ hearts in the silence. It’s genuinely one of the most frightening episodes of any TV series and a great way to scare your pants off with a little 90s nostalgia during the creepiest of holidays.

3) Are You Afraid Of The Dark

Ok, so yes, there are a few specific Halloween themed episodes of the YTV horror classic and they are good ones too. However, this show gets high ranking because it technically started with a Halloween special. The pilot premiered on Halloween weekend with low expectations, but was such an instant hit with critics and terrified children of all ages that it went on to play for 10 years and 91 episodes. So technically, Are You Afraid Of The Dark is the most successful Halloween special of all time that actually spun off into a series, rather than the other way round. Not bad for a ragtag Canadian production that haunted the minds of impressionable 90s kids with lots of free nights to spend by the warm glow of their television.

2) The Simpsons (27 Halloween Episodes And Counting)

Yeah…well…obviously. No one does Halloween like The Simpsons. They’ve parodied pretty much every classic horror film and Twilight Zone episode at this point and are so desperate for new Halloween content every year that they even do stuff like Avatar parodies for reasons best known to themselves. Still, while it’s easy to mock The Simpsons for being a shadow of its former self, there’s no denying that the annual Treehouse Of Horror episodes delivered some of the best moments in the history of the series and introduced countless kids to horror movie conceits, concepts, and images long before they were ready to experience the real thing. What a wonderful bad influence this show was…they should still cancel it at this point…but still, what a run!

Yes, that’s right. There’s a Halloween TV special that ranks above The Simpsons. An absolute masterpiece that you likely haven’t seen. In the early 90s, the BBC decided to pull a big ol’ Halloween prank on the public. They aired a TV special that claimed to be about a TV crew investigating a haunted house and even hired popular TV personalities to play themselves to add to the illusion. This was long before Blair Witch and all the found footage horrors of recent years as well. So the public went nuts. People fell for the trick, countless complained, and legend has it that someone even committed suicide, convinced that the ghost would enter their home. Obviously Ghostwatch won’t have the same impact on viewers today and it gets a bit silly in the finale. However, there’s no denying that the show has aged remarkably well with nearly subliminal appearances of the ghost that still hit hard. Paranormal Activity stole quite a bit from Ghostwatch and quite frankly never topped it. Track this thing down this Halloween and see for yourself. It’s a sadly unheralded Halloween horror classic that deserves a fanbase outside of the UK.