Most Anticipated AAA Games of 2017 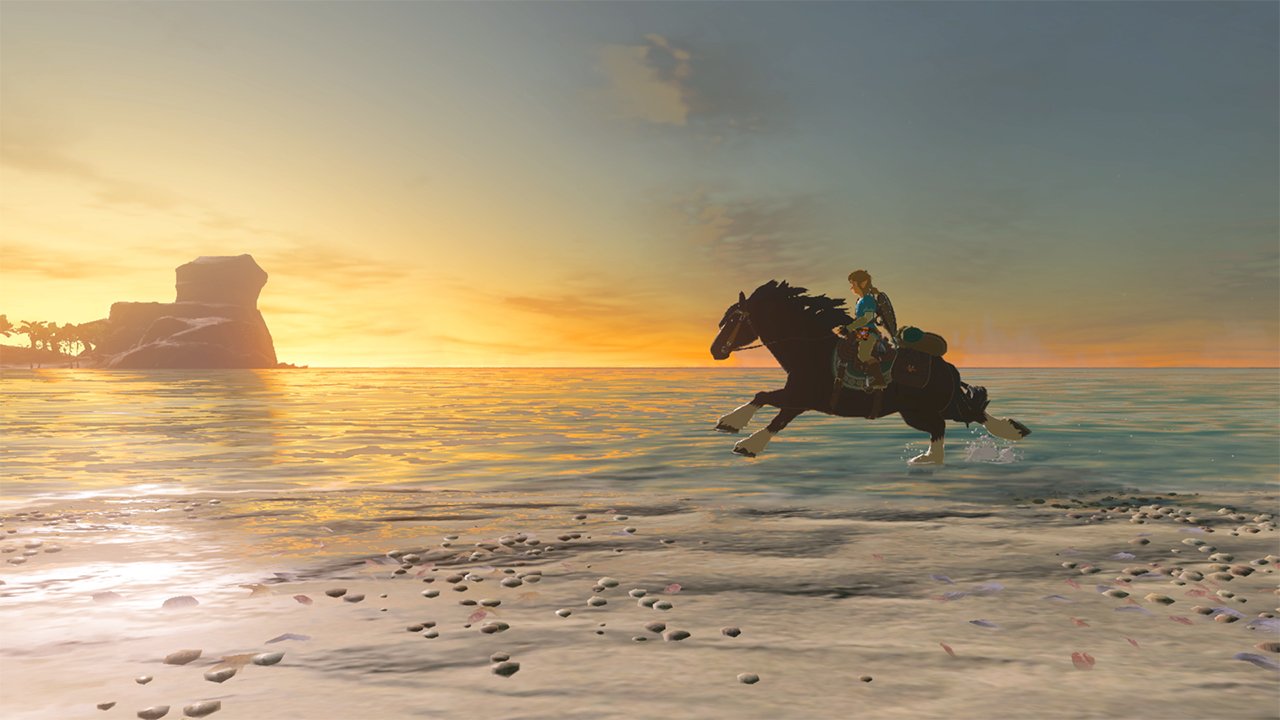 Well it’s 2017, which means it’s time for every outlet on the face of the planet to put together their “best of” lists for the year behind us. Whether it’s games, film, TV, music, interpretive dance or the snow under the tires of my car, everything must be ranked from best to worst in an orderly fashion.

However, there’s also the matter of the year ahead. 2017 looks to be another great year to be a gamer, and while indie gaming is getting more and more exciting and the AAA gaming business is getting less and less appealing by the day, there will always be a level of spectacle to lavish multi-million dollar productions that keeps fans coming back. Here are CGM’s most anticipated AAA games of 2017:

While the degree to which it was satisfying is…debatable, the ending of Mass Effect 3 provided a definitive conclusion to the story of Commander Shepard, making any future entries a difficult task. However, the method that BioWare is using to continue the franchise is the only logical way to do so: Set it in a completely new galaxy with a completely new cast 600 years after the events of the original Mass Effect trilogy. Mass Effect: Andromeda follows Sara/Scott Ryder, an operative tasked with searching for new planets for humanity to colonize as they travel the Andromeda galaxy and meet various allies and enemies on their journey. It’s not just a story departure either; Andromeda will have an open-world setting, a first for the series, and allow the player to fully customize their character’s stats instead of choosing from pre-set character classes. Details on which aliens you can sleep with have not been revealed yet, but hopes are pretty high.

When the end of the decade rolls around in three years, there’s one game that will almost certainly be a part of the conversation on what the best games of the ‘10’s are, and that’s Red Dead Redemption. The open-world western is considered by many to be Rockstar’s magnum opus, and its mature, sweeping story of revenge and redemption left an impact with what is arguably one of the greatest endings in the history of video games. So when a map for another game in the Red Dead franchise leaked, fans naturally went berserk. The map, if it’s legitimate, seemed to imply a game set before the events of Red Dead Redemption. However, when the game was officially announced a few months ago, the title of Red Dead Redemption 2 was unveiled, implying a direct sequel. Currently, not much info on the game has been revealed other than that it exists and will be an open-world experience with both single-player and multiplayer elements—but at this point, Rockstar doesn’t need to reveal much to get people excited.

The Zelda franchise has always been somewhat open-world, with a main hub that branches out into several dungeons. However, the newest installment of the franchise, Breath of the Wild, will be the first entry to go 100 per cent open-world by the modern definition of the term. This includes sidequests, multiple entrances and exits to dungeons, and a world approximately 12 times larger than that of Twilight Princess. The story also has a unique twist: it takes place centuries after Ganon has already won and destroyed Hyrule, and a newly-awakened and amnesiac Link must defeat the villain’s trapped form before it can be freed yet again. Not only that, but the game will most likely be the showcase title for Nintendo’s hotly anticipated new console, Switch, giving players a demonstration of what the next stage of Nintendo’s offerings is all about. Pokémon Go may have temporarily dragged the seminal gaming company out of the ditch, but it’s up to Zelda to get it back on its feet and then some.

The tale of Persona 5’s release is a long and tortured one for fans of the franchise. It started with a vague image teaser in 2013 announcing a winter 2014 release, only for several delays to gradually wear on the fandom’s patience. When the game was finally released in Japan a few months ago, western fans still had to wait until February of next year to get their hands on it, or at least, they did until the localization was further delayed until April. Nevertheless, it seems that the long, grueling wait is finally coming to an end, and gamers around the world will finally be able to play Persona 5 next year. Following two of the most popular and widely beloved JRPGs in recent memory is no small task, but everything shown of the game so far seems to indicate an darker and more violent tone than the upbeat Persona 4 or even the somber Persona 3, and follows a group of teenagers calling themselves the Phantom Thieves getting revenge on the adults who have wronged them. The addition of stealth mechanics to the dungeon-crawling that is Persona’s bread and butter should be a novel addition, and following the events of 2016, the game’s theme of catharsis should be a timely one.

While Disney buying Marvel turned out to be a huge business success for both companies, it was a downer for fans of a certain legendary fighting game franchise. The tangled web of who owned the rights to which characters seemed far too complex for anyone to put the effort into untangling, and for several years it seemed like Ultimate Marvel vs. Capcom 3 would be the series’ last gasp. However, that suddenly changed a few weeks ago when it was leaked that Marvel vs. Capcom 4 would be announced at PlayStation Experience 2016, and sure enough, Capcom didn’t disappoint. Following the roof-raising announcement trailer, more details about the gameplay have since been revealed. While the character selection has been limited to two-on-two battles instead of previous entries’ three-on-three, and assist attacks have been removed, a new mechanic has been introduced to mesh Marvel vs. Capcom: Infinite with Marvel’s blockbuster cinematic universe. Before each match, each player selects an Infinity Stone, with each stone granting different benefits. While the possible absence of the X-Men and other Fox-owned characters is a huge downer, the fact that this project is even happening at all speaks to Marvel and Capcom’s devotion to the franchise, and hopefully that devotion will translate into a great fighting game.

It’s been well over a year since PlayStation’s legendary E3 of dreams, where three highly anticipated projects thought to be in development hell for the rest of eternity were re-revealed or unveiled for the first time. Of those three, perhaps the most unexpected was Shenmue III. The original two Shenmue games are considered cult classics, but a combination of their commercial failure and the first Shenmue being the most expensive game ever made at the time seemingly killed the franchise forever. All of a sudden, the pleas of fans were answered when Shenmue III was announced to be going to Kickstarter last year. It reached its goal of $2 million in under eight hours and went on to raise over $6 million, making it the most successful video game Kickstarter in the platform’s history. The story of teenage martial artist Ryo Hazuki‘s journey to play pachinko and presumably find his father’s killer at some point will continue.

South Park: The Fractured but Whole

Younger gamers may not remember it, but there was a time when licensed games were considered the most horrible blight on all of gaming. Lately, the flood of lazily put-together beat-em-ups has been blissfully empty, but the memory remains fresh in the minds of many. It’s for that reason that there was a healthy amount of skepticism going into South Park: The Stick of Truth, but a combination of simple turn-based combat and some of Trey and Matt’s most hilarious writing in years made it a surprise hit and a frequent guest in 2014’s year-end best of lists. A sequel seemed natural and was originally set for this December, but a delay, as well as The Stick of Truth’s developers Obsidian getting replaced by one of Ubisoft’s in-house studios, can be seen as a cause for worry. However, a revamped combat system more inspired by board games than RPGs and a story poking fun at the superhero film boom are putting at least some of those fears to rest.

Let’s be honest: the Resident Evil franchise has been in a very, VERY sorry state for a while now. After Resident Evil 4 breathed new life into the franchise and defined third person action games for years to come, Resident Evil 5 is acknowledged as a disappointment, with Resident Evil 6 going past “disappointment” into downright awful action movie territory. It seemed that Resident Evil was drifting away from its survival horror roots towards the cheesy and horrible films, but a surprise announcement at E3 earlier this year shocked many fans in a very good way. Resident Evil 7 signified a return to the survival horror genre and, in a first for the franchise, a first-person perspective. The game’s protagonist, Ethan Winters, is a civilian with little-to-no combat skills who is forced to go up against unspeakable horror when the search for his missing wife leads him to a derelict mansion. Trailers so far have promised an emphasis on atmosphere and chills rather than bombastic action set pieces. 2017 looks to be a very good year for horror games thanks to Resident Evil 7, Outlast II and…

Despite the original game being mostly forgettable, Prey 2 immediately turned heads when it was shown off at E3 years ago for its Blade Runner-esque aesthetic and unique open world. Unfortunately, the project fell into development hell and was ultimately cancelled, yet it seemed Bethesda took notice of the hype surrounding it and decided to rebuild a new Prey game completely from scratch with the help of Dishonored developer Arkane Studios. The result was shown off at this year’s E3, and hinted towards a first-person psychological horror sent in a space station during an alien invasion. Subsequent gameplay footage strengthens comparisons to BioShock, with existential themes and a strong focus on narrative.

Guerrilla first made a name for themselves with the Killzone franchise, but following the underwhelming PS4 launch title Killzone: Shadow Fall, they began work on something entirely new. When the fruits of their labour were shown off for the first time at PlayStation’s 2015 E3 conference, it wowed the audience so much that it managed to stick in their minds alongside The Last Guardian, Final Fantasy VII Remake and Shenmue III. Gameplay footage showed an open-world in a future ruled by dinosaur-like robots, with tribes living in the wilderness and hunting them down for scrap. Initially slated for 2016, it was subsequently delayed but given a solid release date of February 2017. There are few times in history where a new IP from a developer with not the best amount of clout receives as much hype as Horizon based on the uniqueness of the idea, but hopefully this will be the first of many in the coming years.