Unbreakable is One of The Great Superhero Films 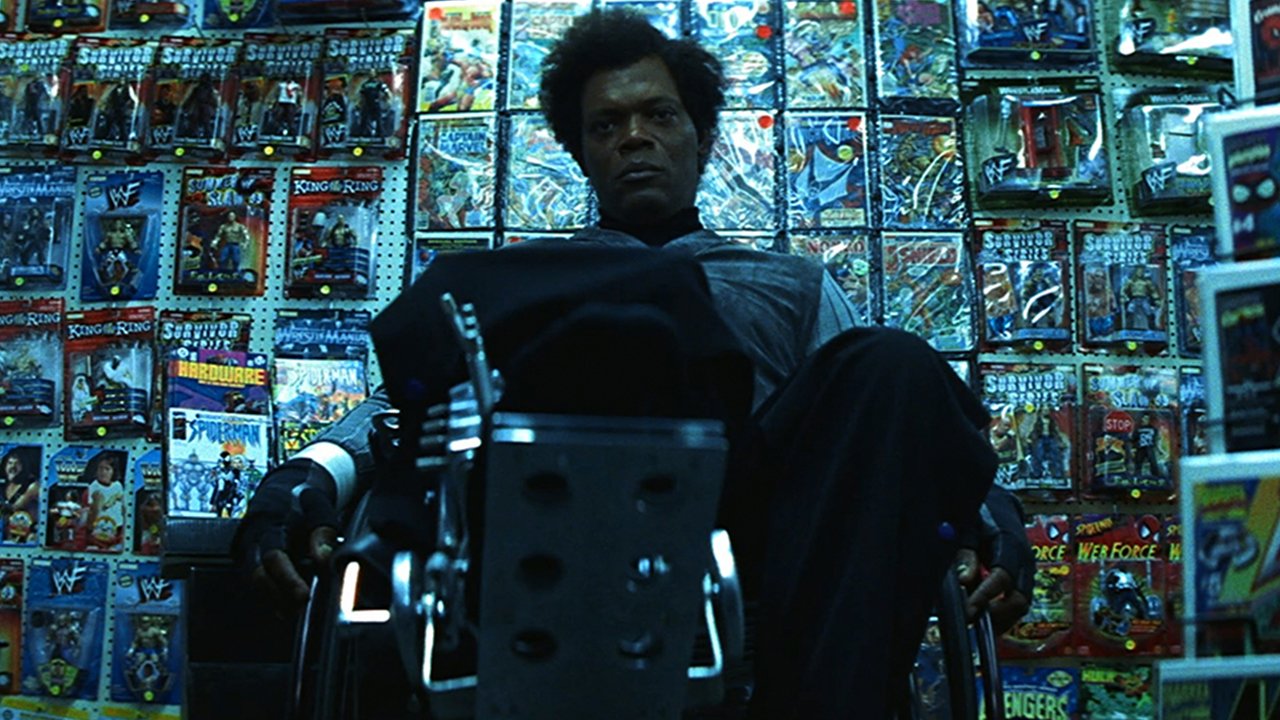 When M. Night Shyamalan’s Unbreakable hit screens in 2000, it was considered a rare genre movie event—just not for the reasons that it should have been. Released a year after the writer/director’s The Sixth Sense proved to be an unexpected Oscar-nominated blockbuster bonanza, all the marketing suggested that this would be another dour and suspenseful supernatural thriller. That wasn’t necessarily false advertising. The film very much feels like its predecessor; a slow-burn thriller that plays like a dark drama with every moment milked for suspense thanks to an ever-present sense of supernatural and existential dread. The thing is that the studio (technically Touchstone, but actually Disney) went out of their way to conceal the actual genre of the movie until audiences’ asses were in the theater. That’s when Shyamalan’s quiet blockbuster kicked off with a title card about comic books and their immense cultural value. The first twist pulled by the filmmaker on viewers was delivering them a superhero story in the guise of a psychological horror movie. It was a weird choice, but a brilliant one. The film remains one of the peaks of the genre, even though it’s rarely remembered as a superhero story thanks to tricky marketing and an unexpected delivery system that used harsh tones and domestic drama.

Hard though it might be to believe these days, superhero movies weren’t particularly marketable at the turn of the millennium and certainly weren’t meant to be taken seriously. Superman was long gone, Joel Schumacher had killed off the Bat-franchise, and Bryan Singer’s first X-Men flick hadn’t yet started the Marvel movie revolution. At the time superheroes were still primarily considered kiddie fair by Hollywood studios, with only the comics themselves daring to take the characters seriously or treat them with any nuance. So when M. Night Shyamalan decided to make a superhero origin story as a tale of worrying psychological horror, the idea must have seemed insane. The producers were wary of mentioning the word “superhero” to the press and even on the DVD. Everyone just wanted to pretend this was The Sixth Sense Part 2: This Time Bruce Willis Is Immortal, Not Dead. In a way that’s true, but in a more profound way, that’s not.

The delicate story kicks off with a slow burn and freak accident. After establishing Bruce Willis as a troubled soul, he’s immediately thrust into an off-camera train crash (Shyamalan goes out of his way to keep the spectacular story small and human, both out of budgetary concerns and to defy genre). When he awakens he discovers that not only is he the sole survivor of the crash, but also made it out of the wreckage without even a scratch. Soon after, he’s contacted by Samuel L. Jackson’s high-end comic art dealer who suffers from a debilitating illness that makes him particularly susceptible to injury. He long ago decided that there must be a human on the opposite side of the spectrum who is (wait for it) unbreakable. He thinks Bruce Willis is that person and more importantly, he’s convinced that if Willis is that person, then he must be the world’s first superhero as prophesized throughout the history of myth and folklore leading up to comic books. Willis thinks he’s insane, but can’t shake the theory and slowly tests himself to discover if that might be the case—through tremendous fear and trepidation.

In many ways, Shyamalan explores the most common themes of the great 80’s superhero deconstruction graphic novels and even some of the concepts that foundational creators like Stan Lee introduced earlier. The film is about accepting the great weight of being a hero (you know, “with great power” etc.), but also the horror of learning that you aren’t what you seem. It’s the classic internal dilemma of Spiderman and Batman, only done in an unexpectedly grounded way. There are no massive city-destroying set pieces, no bright lights of heroism. The biggest action scene (if you can call it that) takes place in a suburban home and the color palate is bathed in dark blue light and shadow. Shyamalan uses horror movie grammar to tell a superhero awakening tale in a way that feels both uneasy and oddly right. There’s a creepy horror to Willis discovering his power, and he refuses to believe the truth since it’s so ridiculous. He has an innate desire to do good, yet can’t explain way. He normally feels guilt and depression from underachieving. He hasn’t awoken or accepted his fate yet and each step towards that revelation feels unnerving because suddenly the world is no longer what it seems.

Intriguingly, two of the most loathed superhero movies in recent years have borrowed (perhaps deliberately, perhaps not) some of Shyamalan’s unique approach to superhero mythology. Josh Trank’s infamously troubled Fantastic Four reboot had the Marvel icons find their powers through body horror, while Zack Snyder’s Man Of Steel treated Clark Kent as a mope who refused to accept his powers and then couldn’t quite handle the responsibility once he did (both also used Shyamalan’s darkly brooding aesthetic when they weren’t going big and blowing stuff up real good). Yet, neither movie has the same pull or power of Unbreakable because they used established superhero icons for their genre deconstruction. It was impossible to identify with Kent’s brooding worry since we all knew he was going to become Superman and even harder to be unnerved by the Fantastic Four’s superpowers since they are famously cartoony in nature. The endings of those stories and struggles were predetermined. Unbreakable is a whole other beast entirely.

Short of flying and laser eyes, Willis’ character may as well be Superman. He seems indestructible (minus a single weakness), possesses incredible strength, has an inexplicably deep connection to humanity, feels personally hurt by wrongdoing, and is clearly destined for something important. Yet, because we enter the story with him as an average man with no sense of spandex destiny, there’s suspense and concern built in. These developments could mean anything. The superhero theory posited is treated as ridiculous rather than as fact until it becomes undeniable. Step by precarious step Shyamalan gradually introduces all of the tropes of a superhero origin story, just presented in the language of a psychological horror movie and/or thriller so that it doesn’t feel like a comic book until everything snaps into place with a twist ending that reveals a supervillain hiding in plain sight. Wills gets a cape and cowl; they are just of the most humble possible origin. His villain is even colourfully diabolical, just presented in the manner that could be considered human eccentricity and with enough of a tragic backstory that viewers don’t want to believe the evil until it’s in their face.

That’s a level of moral complexity that the current slate of DC movies only pretend to present and that only Christopher Nolan was ever able to achieve. Yet, because Unbreakable was a sneak attack superhero yarn, it’s rarely ever remembered as one. However, there are extraordinary passages (like one involving a well intentioned family stand off with a gun in a kitchen) and Willis’ character might be the most fascinatingly conflicted superhero outside of Batman. If Unbreakable had been published as a comic book, it would likely be considered a classic. If the film had been released a decade later, it would be considered a beloved and grounded alternative to the colourful low stakes adventure of the Marvel Cinematic Universe. However, despite being a critical and commercial success, Unbreakable was swiftly forgotten and since M. Night Shyamalan became a joke somewhere in the 2000s, few had an interest in re-evaluating his early successes. Thankfully, that’s changed recently. Now that superhero cinema is a massively important contemporary genre, Unbreakable has slowly inched back to being reclaimed and in a huge n’ unexpected twist last weekend, the franchise has even been revived.

In a spoiler that will no longer be a big deal in a few months, M. Night Shyamalan secretly pulled off this trick again and delivered an official Unbreakable sequel in Split. A film that presented itself as a kidnapping thriller was secretly a supervillain origin story that tied into Unbreakable in an unexpected final twist. Somehow, in a world of franchise filmmaking, Shyamalan managed to keep it a secret that he’d secretly made a sequel and introduced a new villain for Willis to fight in the grand finale of his oddball superhero trilogy. Years ago, the filmmaker claimed Unbreakable was the first part of a trilogy. Now we’re two chapters deep. What the final Unbreakable movie will be is unclear. It can’t be a sneak attack again. Shyamalan will have to be overt. The threequel won’t be as grounded. There will be at least three super powered characters in play, but the world will remain as small and psychologically tormented. Thankfully, the filmmaker has embraced absurdity with his last two movies, because going entirely for the bleak tragedy of Unbreakable won’t work next time. It’ll have to be bigger. It will have to be bolder. Split introduced heightened elements and morbid wit that will help. However, the franchise must morph into something new and that’s a refreshing surprise.

In a world where superhero movies are ubiquitous and sincerely silly, Unbreakable is the meditation on the human weight in superhero mythology that we deserve, coming from the most unlikely of filmmakers. It will be fascinating to see how M. Night Shyamalan wraps things up and what he has to say about the genre in the process. The table was set with a genuine superhero masterpiece that dug into the pain and horror of heroic destiny unlike any other film. That world was expanded with a gloriously goofy pulp sequel with a purpose. Where things go from here, only Shyamalan knows. Thankfully, the guy is pretty good at unexpected twists when he puts his mind to it and he might have something truly special planned for his grand third act. The set up sure was special, let’s hope he sticks the landing. Yet, even if he doesn’t, Unbreakable will always remain one of the most fascinating and intriguing takes on superhero mythology ever spit out by the studio system. If its legacy is ultimately spoiled by underwhelming sequels, well hey…that’s pretty much a genre requirement of superhero movies, right?