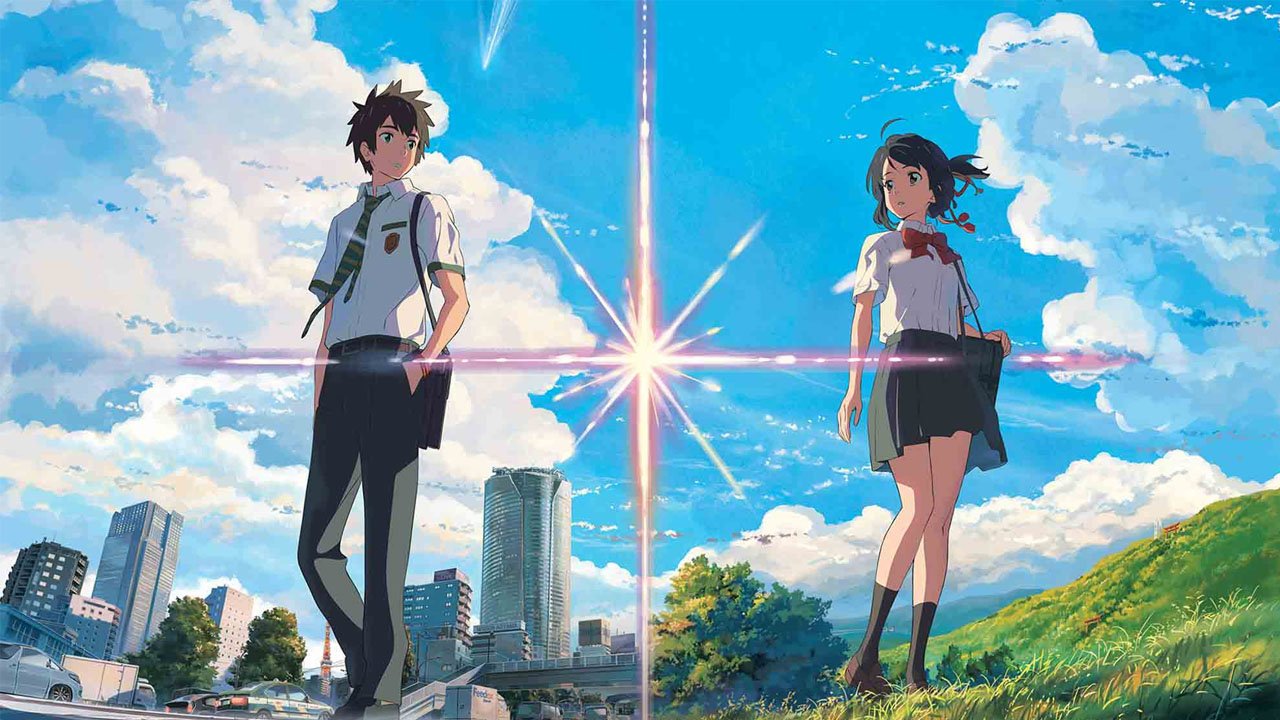 Makoto Shinkai never set out to become a mainstream director. Preceding Your Name’s awe-inspiring success with the highest worldwide box office earnings of any Japanese film ever, his movie Garden of Words opened to a mere 23 theatres. It featured the qualities of a quintessential Shinkai movie: lonely characters who have difficulties trying to connect, a contemplative and bittersweet tone, and an ending where victories are a matter of inches rather than miles. Not exactly the makings of a blockbuster, but perhaps, when shown in the right light, necessary ingredients to touch a worldwide audience. And Your Name, a departure in form to his other movies, proved it could do just that.

“This is his most accessible film to broad audiences,” summed up Crunchyroll’s content manager, Christie Leu, and Miles Thomas, their Senior Social Media Manager. In a joint interview, Leu and Thomas spoke to the universality of Shinkai’s latest runaway hit, Your Name, and why it’s the first time a Shinkai film is being marketed worldwide (more of their thoughts can be found below). As veterans of the most recognizable name in Anime streaming to a Western audience, they understand that Your Name’s international success relies heavily on the film’s more traditional and accessible “boy-meets-girl” story.

Shinkai noted the difference Your Name had to his other films himself in an interview with HeyUGuys in London. He explained, “I really wanted to make it faster because I had loads of stories to tell, but I wanted to keep them individually short.” He kept in mind the current zoom-paced zeitgeist of the moviegoing youth, and “didn’t want to make the film too long because young people who use social media are used to consuming art and information really quickly, and doing more than two things at the same time.” Simply put, he didn’t want his viewers to get bored. It was an experiment in popular filmmaking, and it had dazzling results: at a screening in Los Angeles before the movie’s Tokyo premiere, Shinkai noticed that “the audience laughed, then they sobbed.” He said, “I had drawn a graph when I was making it about how the audience might react, and it was just like that.” But the movie’s success goes beyond any graph or any figure. When you track the history trailing behind the movie, it becomes clear that Your Name is merely the commercial zenith of an artistic experiment many years in the making, one that perhaps invented a new medium—or at the very least, was legitimized by a single animator working from his bedroom named Makoto Shinkai.

So How Did Shinkai Invent a New Medium?

Well, with long hours of lonely extracurricular work. After graduating with a degree in Japanese Literature at Chuo University, Shinkai spent the next five years making video clips and working in graphic design for a video game company called Falcom. He used his remaining evenings after long days of work in the studio developing his first five-minute OVA (Original Video Animation) called She and Her Cat. With it, he won the grand prize at the 12th DoGA CG Animation contest in 2000. It wasn’t the quality of the short film alone that impressed Yutaka Kamada, the producer at DoGA, but rather the unique use of the medium. He said of Shinkai’s debut, “What shocked me most about Shinkai’s work wasn’t that it was spectacular, but simply that it moved me. All the others were just showing off what one could do with CG.”

For those who don’t know, CG stands for “Computer Graphics,” and its use in Japanese animation was still nascent. The new digital form had an uphill battle against a deeply traditionalist culture rooted in pen-to-paper hand drawn animation (for example Hayao Miyazaki only first used CG with Princess Mononoke in 1997 and Spirited Away in 2001, and to a minimal degree). But CG animation unlocked a new generation of open-minded filmmakers who didn’t have the expensive resources required of animation, and democratized the art form in a way which allowed fully featured video animation to be produced alone and at home. According to Kamada, Shinkai’s take on the medium was really the first to establish its potential: “He showed how this story really works with CG and why it became such a moving showpiece. Everyone who saw it and checked it out was shocked and amazed,” said Kamada, speaking of the early potential of the deeply lyrical CG animation in She and Her Cat. “This was the first piece that really moved me and had a tremendous impact. I was also convinced that this marked the establishment of personal CG anime as a genuine medium of expression. He showed everyone that it was possible to make a personal CG anime on your own and I feel that he is responsible for giving birth to this new medium,” he said with finality.

If She and Her Cat is the introduction of Shinkai’s intimate style to the world, then Your Name is its commercial zenith. With the new movie, the style was supersized right along its commercial outreach. “It resonated with viewers in Japan, for whom memories of the Fukushima Accident are still very fresh,” Crunchyroll’s Leu and Thomas explains. “The pivotal event in Your Name and subsequent fallout felt very similar to that accident, and the effort to try to change the past and save something precious that was lost in this kind of tragedy was a vivid storyline for viewers in Japan,” they continue, helping to contextualize the film. Their explanation also manages to capture how Shinkai translated his style to a more mainstream film by bringing an event both colossal and utterly personal to the mindshare of Japan. It highlights something fundamental to Shinkai’s approach to art. And defining such a thing—this Shinkai style—can only begin with people.

The relatively young director is very aware of the fact that even in extraordinary circumstances, there remains a through-line of day-to-day banality. He gives, as an example, the dramatic imaginings you might have of what might happen at a big production company. But he says that in reality, the experience is largely uneventful. It mostly “consisted of everyday life,” Shinkai says of the one and a half years it took to make 5 Centimeters Per Second, his breakout film. “So just like when someone asks you if anything notable happened in everyday life or at your workplace, you’d go ‘Hmm…’” Suddenly, he found that some of his coworkers were even getting married. “During production, they were leading their normal everyday lives without me knowing it obviously. The bottom line is that portraying everyday life is what we do. So it’s important that we ourselves are having our everyday lives.”

Couple this acuity Shinkai has for the very daily human experience with the epic, and it’s no wonder his latest film really struck a chord. “It’s a time-traveling love story focusing on the theme of fate. In Asia, especially Japan, audiences really favour stories around pure love and fate (i.e.: Koizora, Sekai no Chuushin de, Ai wo Sakebu, Ima, ai ni yukimasu, etc.),” Leu and Thomas add. Not only that, they also say that the time-traveling/body-swap trope is still a really popular trend in Japan. They put it simply, “The reactions from both characters when they are in each other’s body was entertaining.”

The Internet helped Shinkai from day one. His early work lived and breathed on the web after all. “I didn’t know anyone working at a TV network, and no theatre would screen my stuff, so I’d just make it myself and upload it onto the Internet,” Shinkai said in an interview with NHK World. “Naturally, the Internet isn’t just limited to Japanese viewers so you can see my stuff abroad too. That’s helped increase my global exposure over the last ten years.”. That interrelationship Shinkai’s work has with the Internet extends to the modern day, considering Your Name can be described as a movie that went viral. Leu and Thomas note that, “Your Name started to pick up its fame after viewers began tweeting about the film.” They said, “Similar to finding Easter eggs, many viewers go back to the theatres to watch the movie over and over again, and each time they get to find new things that they hadn’t discovered previously. This word-of-mouth effect made a lot of people that are not familiar with anime more interested in seeing the film.”

Perhaps the main observation here is that despite Your Name’s exponentially greater size compared to his previous films, it is still a continuation of the very personal medium of CG animation Shinkai spearheaded from the beginning. It’s apparent in everything, from the attention to characters, the microscopic focus on the small details of life, and even the music that tends to give his movies that extra breath of life. In the end, if anything can capture what is quintessential about Shinkai, it’s Shinkai himself. In the NHK interview, he describes a certain longing that his characters feel in his movie Voices of a Distant Star—a longing that resonates throughout his entire filmography. He says, “At the end of that anime—this makes me a little embarrassed now—there’s this male/female overlapping dialogue. “I’m here,” they say. After spending eight months working alone at home, with nobody being aware of what I was doing, I wanted someone to know that I was there. I felt that as long as I made this movie, some fragment of it would reach out and touch somebody somewhere.”