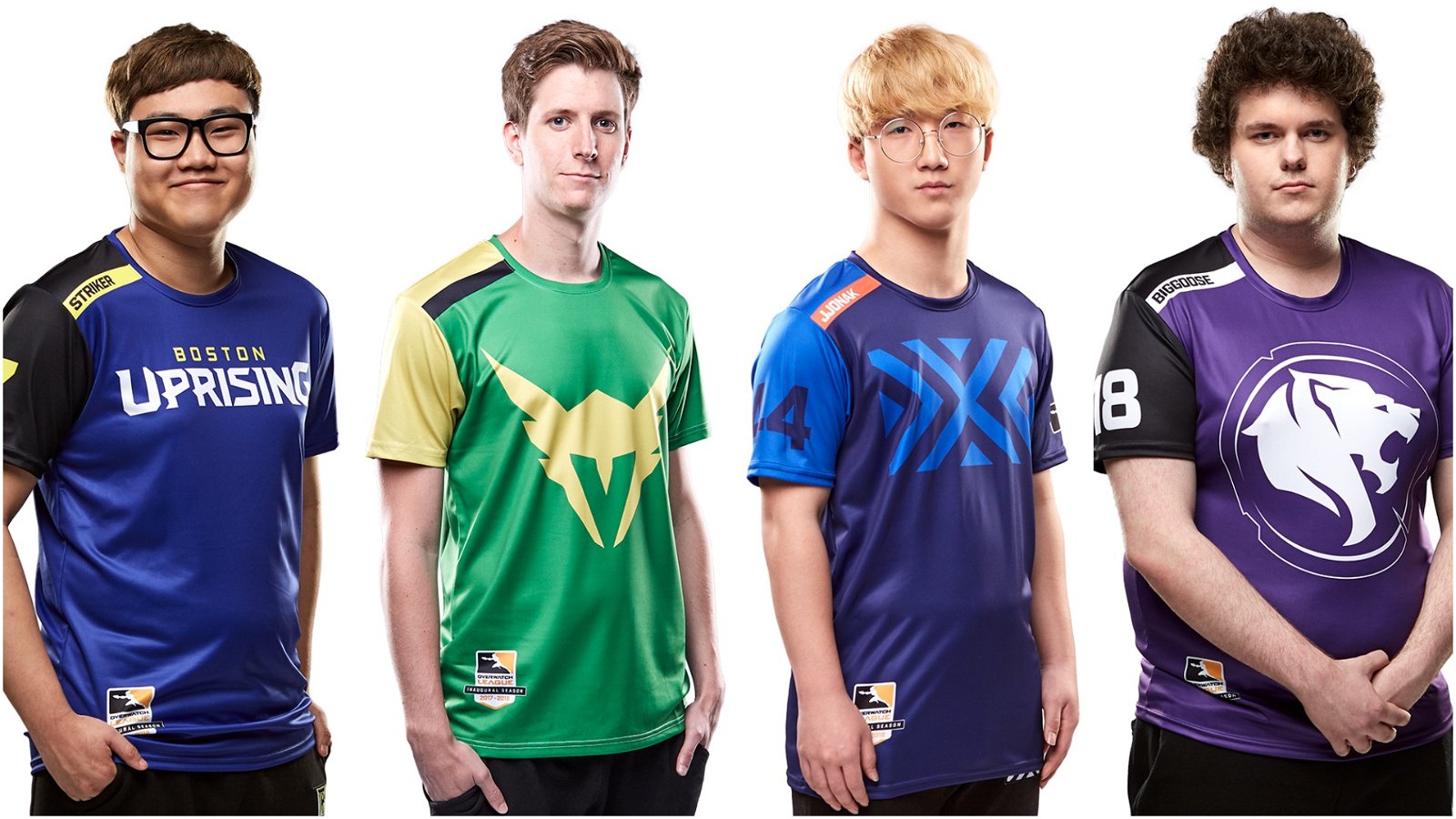 This week the Overwatch League Rundown offers a full Stage 3 playoff preview, the top matches to watch in Week Five, and the best Torbjorn plays from last week!

Before we get into the playoff preview, it’s important to look back at last week’s Overwatch League action and while there were a number of interesting moments, one play stands above the rest. This moment came courtesy of Houston Outlaws DPS player Jacob ‘Jake’ Lyon and it can only be described as wondrous. Entering map two, with his team down 1 to 0 to the L.A. Gladiators, Jake did the unthinkable. He surprised the Gladiators, the casters, all the fans in the Blizzard arena, those watching at home and even my grandma who doesn’t even know what an Overwatch is, by switching to the Swedish defence hero known as Torbjörn.

Now for those who are unfamiliar with Torbjörn, he’s a hero who uses a turret, a blaster and a hammer. The issue is that at the Overwatch League level players are very skilled at destroying turrets and Torbjörn’s lack of mobility and underpowered gun make him a suspect choice at best. That being said, he’s a suspect choice on defence, where he is supposed to be played, so Jake using him on offence was unexpected, to say the least.

In what was a moment fitting of being featured in a Renaissance painting, Jake put down his turret and began ducking and weaving behind the payload, no doubt grinning behind his computer while he did. The world was his meatball and he was a very hungry Swedish man. There was nothing that could stop Jake and his newfound prowess, nothing, except a well placed D.Va bomb courtesy of Hyung-Seok ‘Bischu’ Kim. It turns out that Torbjörn isn’t a very mobile hero and after the death, Jake sadly switched off of the hero. Is this the first and last time we see attacking Torbjörn in the Overwatch League? Possibly, but with the recent changes to Hanzo and Symmetra, as well as the inclusion of Brigette, we are sure to see some new exciting strategies going forward into Stage 4.

a) Tanks for the memories.

b) Never bring a hammer to a fist-fight.

Jona ‘Fragi’ Laine’s Reinhardt is normally rather formidable up close, but apparently not against a primal rage induced Eui-Seok ‘Fearless’ Lee.

Was this play luck? Was this play skill? Who knows, but it’s clear that Kellex is now both shaken and stirred.

Against the Houston Outlaws, Lane ‘Surefour’ Roberts showed why he is one of the best Widowmaker players in the game.

Going into week 5, there are an astounding nine teams that have a shot at making the Stage 3 playoffs, showing major strides in league-wide parity. At the top, NYXL and the Boston Uprising are the only teams that have clinched playoff spots and the focus for them this week will very much be trying to capture that hallowed top seed.

NYXL has been dominant all year and were very much expected to compete for every championship in the Overwatch League’s inaugural season. They’ve only dropped one match this Stage and that was against the Uprising. The team is very much led by its support players  Libero and Ark, and they will need to continue their dominance if NYXL wants to repeat as champions. As for Boston, they are easily the most surprising team in the league this season and haven’t lost a match this entire stage. They also possess arguably the best Tracer player in the world in Nam-joo ‘Striker’ Kwon and he has regularly dazzled with plays like the one featured below.

Schedule-wise, NYXL has a very easy week as they face the Dallas Fuel and the winless Shanghai Dragons. Boston, on the other hand, is going to be in tough as they play the league’s two L.A. teams who are both trying to clinch their spot in the playoffs. NYXL could very well take the top spot and get their choice of first-round opponents come playoff time.

It seems fitting that the Overwatch League’s two L.A. teams are playing well at the same time and it would be even more fitting to see their play culminate in a Stage 3 playoff showdown. The two teams possess arguably the best rivalry in the League and having a playoff version of The Battle of L.A. would create a level of excitement yet unseen in the Overwatch League so far.

As for the actual teams, the L.A. Valiant is currently holding down the #3 spot and can guarantee themselves a spot in the playoffs with at least one win in their final week’s matchups. The team has looked rejuvenated in Stage 2 off the backs of their new signings Joon-hyuk ‘Bunny’ Chae and Scott ‘Custa’ Kennedy as well as the rejuvenated play by Canadian phenom Brady ‘Agilities’ Girardi. That being said, the Valiant has struggled a little in the past two weeks, losing to the Houston Outlaws and London Spitfire, and need to step it up in week five. They face the table-topping Boston Uprising as well as the always dangerous Philadelphia Fusion, and they will need to dig deep to avoid losing their place in the playoffs. In spite of that, the team holds a very high +13 map differential, and if Agilities can keep making plays like the one featured below, then the Valiant should be more than okay.

On the other side, the L.A. Gladiators find themselves in a familiar position: heading into week five needing a couple wins to clinch a spot. The problem is that the last time that they were in this situation they dropped both of their final week matchups and went from playoff shoe-ins to 5th place finishers. The team has shown that when they are on their game they can beat any team, including the NYXL, London Spitfire, Seoul Dynasty, Boston Uprising, and Philadelphia Fusion. With Chan-Hyung ‘Fissure’ Baek and Lane ‘Surefour’ Roberts leading the charge, the Gladiators have looked far more confident in Stage 3 and should be able to overcome their Stage 2 shortcomings.

5) The Dogfight: Almost Everyone Else

The Houston Outlaws, Philadelphia Fusion, Seoul Dynasty and San Francisco Shock all sit at four wins and four losses and are very much in a must-win situation in week five. The London Spitfire sit at three wins and five losses and need a miracle in order to qualify. This category may as well be called the Biggest Letdown, because, save for the Shock, all of these teams have enjoyed top of the League success in the past two Stages and underperformed in Stage 3.

Starting at the bottom, The London Spitfire look like they’re going to miss the playoffs for the first time all season and the team has looked like a shell of their Stage 1 and 2 selves this time around. The Seoul Dynasty have also looked out of sorts this Stage after finishing in fourth in both Stage 1 and 2. However, it’s not all doom and gloom for Dynasty fans as the team is firmly entrenched in the overall playoff race, at least for now. The Houston Outlaws are also in a familiar position, as they qualified for the Stage 1 playoffs by winning a couple week five matches and are more than capable of doing the same this week. On the bay side, the San Fransisco Shock, have shown marked improvement in Stage 3 and should be happy with their efforts regardless of whether they end up qualifying for the playoffs or not.  If they do, they’ll no doubt do it off of the strength of Andreas ‘Nevix’ Karlsson’s insane D.Va bombs.

The team with the highest chance of making it out of this group is probably the Philadelphia Fusion who play the inconsistent Dallas Fuel on Friday and then the 3rd place L.A. Valiant in the last match of the day on Saturday. The match against the Fuel is basically a free win and if the Valiant loses to Boston on Thursday, then it could be as simple as a win and you’re in scenario for the Fusion.

The late game on Wednesday is very much do-or-die for both the Houston Outlaws and San Fransisco Shock. The Shock took their previous matchup 3 to 1 in Stage 2 and the Outlaws won their Stage 1 game by that same score, making this a true grudge match.

Arguably the top two most surprising teams of Stage 3, the Uprising and Valiant, are both looking to shore up their playoff positions. This could very much be a playoff preview match and be sure to keep an eye on the Tracer battle between Soon and Striker.

The Boston Uprising is such a fun team to watch and that’s a big reason as to why they’re featured twice in this week’s can’t miss matches. The other reason being that the L.A. Gladiators are fighting for their playoff lives and will no doubt be playing with a significant amount of urgency. This one could really go either way, so be sure to keep an eye on the matchup between two of the top tank players in the league in Fissure and Gamsu.

The L.A. Valiant and Philadelphia Fusion don’t really have a rivalry at this stage of the Overwatch League season, but that could very well change this Saturday. This is the last regular season match of the Stage and could hold serious playoff implications depending on how other matches go.

Who do you think is going to win the Stage 3 Championships? And what has surprised you most so far? Let us know in the comments below!

Liked this article and want to read more like it? Check out a look at The Overwatch League Stage 2 Playoffs and our interview with Mercy Voice Actress Lucy Pohl.