Disenchantment: A Fresh Take on a Tired Formula

Matt Groening is Back! 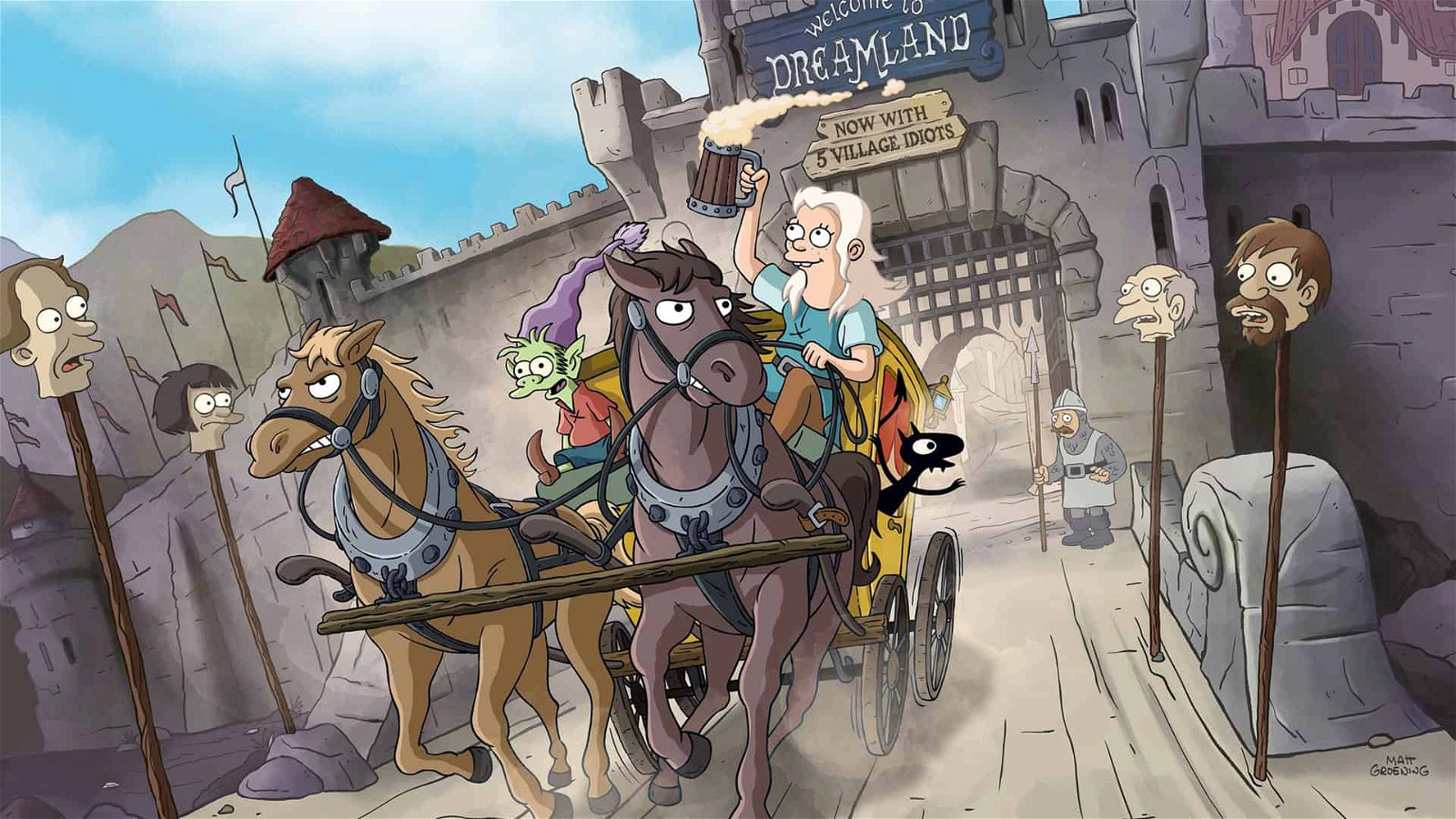 Whether you like it or not, the work of Matt Groening has dominated pop culture since the 90s. From the contemporary Simpsons to the far-flung future of Futurama, he has built a following of fans worldwide. With Disenchantment, Groening is tackling a new setting: the world of fantasy, and it has made me a believer in his work once again.

Coming to Netflix on August 17, Disenchantment takes the tired satirical fantasy genre and breathes new life into the once lifeless corpse. The show follows the rebellious, drunk, gambling-addicted Princess Bean (Abbi Jacobson), her elf friend Elfo (Nat Faxon) and her personal Demon Luci (Eric Andre), as they set off on adventures, bucking tradition and generally getting into trouble in the Kingdom of Dreamland.

The premise is one we have seen before, in countless settings and genres, yet the way the world and the characters play off each other makes the full experience feel fun and fresh. The universe Groening has built with Disenchantment is dancing on the blade of the knife into Shrek territory, yet never falls, even at its lowest moments. With the fast one-liners, just the right level of adult humour, and ridiculous concepts, each episode parodies not only the fantasy genre but European history as a whole.

One of the best things about Disenchantment is the casting. Everyone feels tailor-made for their roles. Jacobson seals the show, making every minute Princess Bean is on the screen a joy to watch.  Elfo and Luci play off each other well, with the actors making what could easily be one-note performances feel deep, engaging, and hilarious. King Zog (played by John DiMaggio) hits the perfect mix of a disgruntled monarch and lazy slob to make his actions and the kingdom he rules over wonderfully broken, sinking further into insanity as the show goes on.

The events of Disenchantment get off to a great start, with an arc finding Princess Bean and co. running away from a potential marriage that King Zog of Dreamland set up to try and save his crumbling country. Travelling through a series of locations and settings, this is Disenchantment at its strongest. Much like Futurama before it, the first arc sets up the characters, motivations, and the world in which they all reside.  It also has some of the best jokes and gags of the entire series, many that are called back to as the series progresses.

The real issue with Disenchantment is that with such a strong opening, it is hard to keep that pace throughout. With only the first seven episodes up for review at the time of writing, it is hard to say where the latter half of the season ends up, but what was on offer was a “mixed bag” of a show. Although there are far more highs than there are lows with the episodes on offer.

While it would have been effortless to relay on jokes to mask the show’s shortcomings, Disenchantment manages to focus on character and growth, with the show revealing new depths to the main cast of characters as it progresses through jokes, gags, and other entertaining nonsense. While yes, they are archetypes and stick closely to their roles as things move forward, the main cast shows real growth, allowing them to be characters you can learn to love.

Like many Netflix shows, Disenchantment feels as if it was made to binge watch. With so many call-backs and lines that are carried throughout, the viewer is rewarded for past knowledge, with each new revelation feeling like an ever-growing series of in-jokes only you and the “cool kids” will get.

I for one loved Disenchantment and the cast of characters it wants me to buy into. At least from the first half of the season, the show is shaping up to be something special. It is hard to say if it will have the lasting appeal of Groening’s past works, but it feels fresh and fun in a way I was not expecting.

Netflix is solidifying its self as an animation TV powerhouse with the likes Bojack Horseman, Bigmouth, and now Disenchantment. While it may not be nearly as deep as the other shows on offer, Disenchantment was a fun watch. Groening did the impossible, he made fantasy comedy fun again, and I for one am excited to see what comes next.