What do your favourite Overwatch mains like to eat? 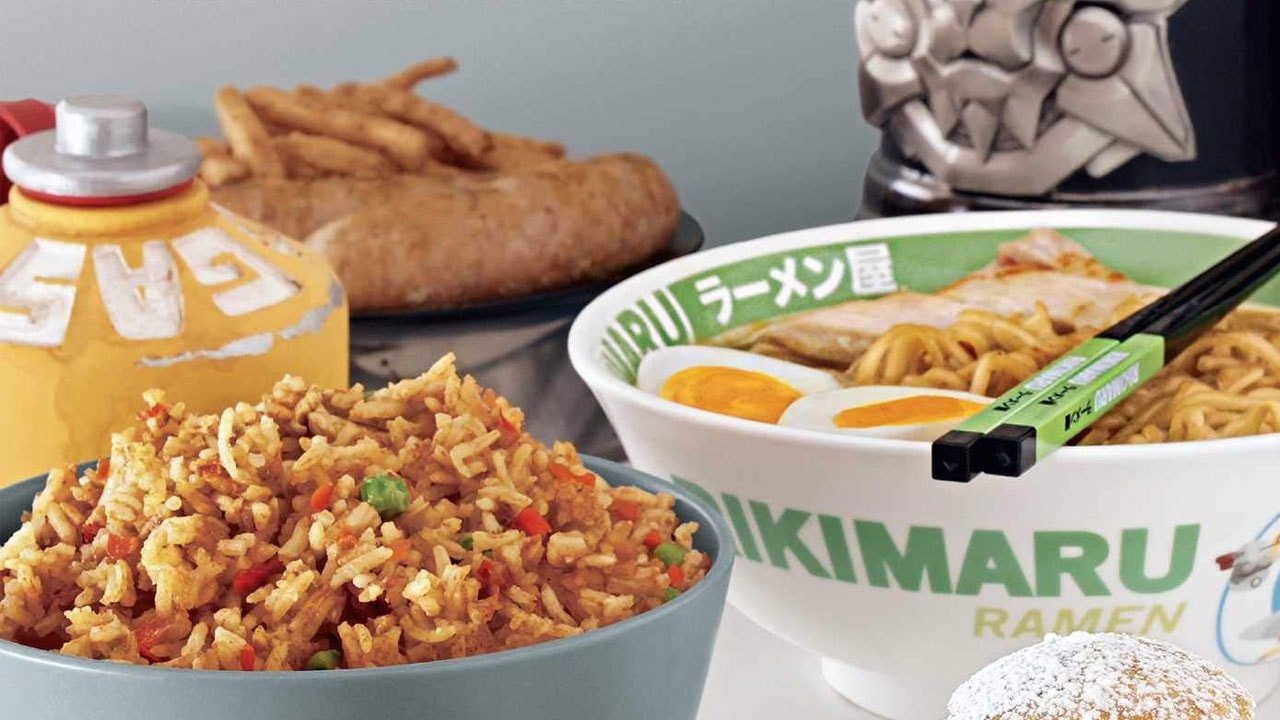 Reinhardt takes his helmet off to enjoy a slice of Eichenwalde Black Forest Cake, remembering the times he ate with former mentor and crusader Balderich von Adler long after The Omnic Crisis.

Ana prepares a sweet milk mixture for Umm Ali, a traditional Egyptian dessert she loved to make for her daughter Pharah. Passed on from Ana’s own mother and reserved for celebrations, baking it reminds her of lost family time since a fateful duel with Widowmaker.

Winston stares at an empty meeting table in Watchpoint: Gibraltar and takes a bite of pineapple pizza. A smile comes while chewing. He relives happier moments with teammates and companions before the Petras Act left him isolated.

These are some of the foods which deepen the personalities behind Overwatch’s battle-hardened characters.

Overwatch: The Official Cookbook, written by Chelsea Monroe-Cassel (who also created franchise-sanctioned recipes for Hearthstone, The Elder Scrolls and Star Wars) takes a step back from the lore delivered through comics, story missions and short animations to bring new perspectives into each character.

The book’s 98 recipes feature easy-to-find ingredients which also change according to the hero’s place of origin.

But how do your personal tastes compare with Overwatch’s five most-picked heroes?

For this, we profiled the flavours of the most popular characters, according to global data from Competitive PC Players on Master Overwatch.

A majority of players who pick Mercy for support might share her sweet tooth in and out of matches.

Her place of origin in Switzerland brings out sweet and savoury flavours from a Bircher Muesli oatmeal.

If you’re a dessert-for-breakfast type of person like Mercy, simmered apples bring a tarty jolt to your morning. The flavours are balanced with oatmeal to make sure the sourness doesn’t stick with you after a hearty morning.

Mercy’s affinity for sweet, filling and protein-high food follows her across the day in a mission to keep teammates alive. Her eats are also made for busy days when she needs nutrition and comfort on-the-go.

A cookie recipe indulges Mercy with semi-sweet chocolate, leveled-out with a touch of cloves and cinnamon. A cheese soup keeps sugar at bay with carrots and leeks adding sweetness. A grated block of gruyere or Emmentaler is melted in for sharpness.

Mercy’s tastes reflect someone who likes a filling meal with some much-needed energy. Despite her health suggestion habits to teammates, she finds her own ways to keep her sweet tooth happy (and her well being happier).

Players who defend and advance with a tank class like Reinhardt might enjoy the main course of a meal more than anything else. His selection of meat-heavy recipes give more than enough energy to charge enemies and come back for more.

Reinhardt starts his day with a balance of savoury and sour flavours from a German currywurst. Saltiness (the literal kind) depends on the type of animal used for the sausage, while it’s mixed with a sweet touch of sauteed onions and curry spices.

Umami describes a savoury and “meaty” taste the former Crusader continues to feel long after eating foods like the cheesy Kasespatzle.

This favourite dish of Reinhardt’s “lifts his spirits when he’s feeling a little discouraged” through a boiled egg dough batter. Color and umami come with caramelized onions. Copious helpings of bittersweet cheddar (or Mercy’s Emmentaler cheese) put Reinhardt back into fighting spirit.

If you’re connected to Reinhardt as a main, hearty family meals might be your fuel for long matches. Deep, juicy flavours from meats or browned veggies give you a much-deserved reward from sessions and take your mind off the objectives for brief moments. When you’re feeling full, a solace from bitter cheese can keep you appetized for a few more bites when the match counts down. Of course, there’s always room for some dessert later too.

Precision tankers using Zarya could make the most out of every bite without losing momentum in a game. Players connected to her might find an instant surge of warmth in soups and dumplings.

Zarya’s recipes also reflect her childhood growing up in a remote Siberian village. This is where she was raised around comfort foods like the (very pink) beet-based Borscht soup. Its smooth texture from blended potatoes and chicken stock hug your buds with smooth, umami tastes.

Zarya’s love for pink is also shown through components like beets and red wine vinegar, which add tanginess flavour-boosters in her favourite soup.

Her love for fragrant ingredients add fresh dimensions into her Pelmeni dumplings. While a beef and pork stuffing adds umami juiciness, it’s kicked with dill and sour cream.

More importantly, Zarya’s palate welcomes tanginess through the use of grenadine and raspberry vodka for her cocktail recipe. The classic combination of syrup and fruit concentrate also make the drink pink.

Players sharing Zarya’s tastes could be a fan of sour flavours with their meals. Whether it’s a cold, rainy day (or an RGB-illuminated Overwatch session at home), Zarya’s preferences suit tankers who like taking a moment to enjoy each sip or bite before mercilessly surging enemies. The sheer warmth of her food also hugs players with comfort during intermissions.

According to the cookbook, the serene Omnic doesn’t eat. But it didn’t stop him from giving happiness to others through food. Support players choosing Zenyatta might love fun-sized pastries, as his recipes focus on delivering foods made to smile.

Zenyatta’s version of the Indian Til Ko Laddu reflects his simplicity with only four recipes needed.

Sesame seeds and sugar mold the Laddu into very sweet non-lethal orbs. The roasted sesame also adds a deep fragrance and bitter kick to the Laddu. Milk and ghee keep the ball together with creaminess for a filling snack.

Zenyatta’s sweet sensations continue with a vegan spin on Tibetan Momos, a steamed bun filled with spiced vegetables. Each one wraps a tight, fluffy bread around an incredibly savoury mix of onions and peas. Mushrooms continue adding creaminess as a light hint of red pepper and turmeric add some spiciness to compliment the bread.

A Tibetan butter tea recipe is served hot, calming the nerves of support players keeping everyone moving mid- firefight. Black tea brings some crisp and bitter flavours met with a pinch of salt.

This drink also finds a smooth, warm texture by incorporating heavy cream and butter. Players might feel soothed for a bit longer than usual before the next sip.

Zenyatta mains sharing his tastes might feel relaxed from welcoming carbs and protein. Players could also share his appreciation by finding joy in simple things like food. Omnic or human alike, Zenyatta players find ways to ease up against all odds and spread that same kind of warmth to teammates.

Players holding objectives down with the Shimada archer may find some energy through deep umami proteins and fermented sweetness from vegetables and grains. Acidic flavours from Hanzo’s seasonings shake meals up. If you also happen to love a personal (saucy) kick to most foods, then the stars have aligned with your main.

A simple Japanese Tamago Kake Gohan dish combines the essentials of rice, eggs and acid for a well-balanced breakfast. It’s also where Hanzo shows a palate for sharp acids from soy sauce and mirin splashed on the dish. A Furikake Seasoning adds sesame and dried fish for extra sweetness. Each bite also comes with raw egg to tone the dish’s powerful flavours down and provide (extra) protein.

Hanzo’s weakness includes the smell of Shimada Tempura, which brings a variety of sweet and umami tastes from deep fried vegetables. While the batter provides crispiness and some salt, it enhances incredibly savoury flavours from shrimp tempura.

The pink blossoms seen in the Hanamura map are a real ingredient for a glutinous Sakura Mochi dessert. Its pink texture comes from pickled sakura leaves, which dye the stuffed rice ball and adds some acidity. Sugar clings onto sweet rice which is deepened with red bean paste stuffing.

Hanzo mains are open to being in control of their own seasonings for the right amount of flavours from any food. This helps players find their own level of comfort for dishes they already find tasty – but could always taste better. Acidic ingredients could be a source of wake-up energy that keeps Hanzo mains focused (and satisfied) ahead of a long match. After a flavour-packed meal, players may exercise their control over their tastes with a palate cleanser.