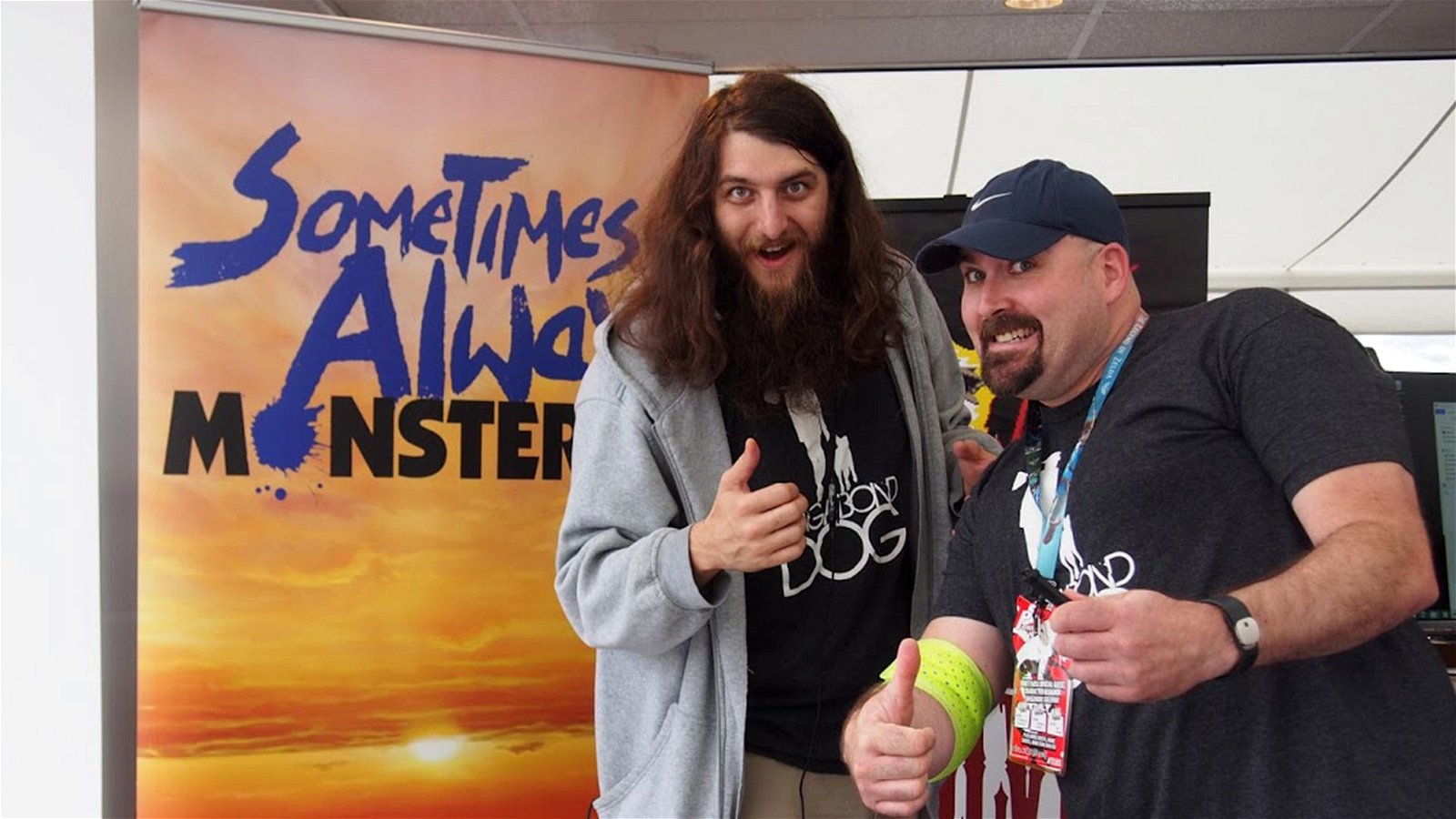 When some people think of Toronto, their first thoughts are usually in relation to a particular sports team, a giant tower, or the morning traffic commute. Sports and traffic aside, Toronto is also turning itself into a pretty tech-oriented city, and videogames have climbed their way into the top ranks of that list.

One game to claim Toronto it’s home is Always Sometimes Monsters, a curious little game to emerge from the city back in 2014. In ASM, your character finds themselves at rock-bottom. Your relationship has fallen apart, you’re about to be kicked out of your apartment, and your job isn’t going so well. It is a game about choice and the consequences surrounding the path you take through the game, and ultimately what’ll you’ll do to climb out of your rut.

ASM comes courtesy of Vagabond Dog, a Toronto-based studio founded by Justin Amirkhani and Jake Reardon. Amirkhani wasn’t always a video game developer. Before he began making games, he wrote about them as a freelance videogame journalist. He travelled to several large studios and even to China to cover video games.

At some point, Amirkhani began thinking about life and decided to make a big decision. He got rid of all his stuff, set up a blog, and toured all over North America visiting and interviewing game developers. “I had just kind of given up everything about my life and was like ‘Ok, we’re just going to go hit reset and see what happens. What’s the world going to do to me?’” said Amirkhani. “My readers would keep me alive with PayPal donations and studios would often let me steal food from their fridge or whatever. So, for the better part of a year, I was on this journey.”

It was during this journey that Amirkhani met several people who made him decide he wanted to tackle the world of developing video games. “Along the way, I met one of the guys from Devolver Digital,” said Amirkhani. “I had this rough idea for my game. We met in this seedy Austin bar, we got wasted, and it was like my first introduction to their company and really what an indie publisher does, what they could do for people, how they find games. The whole part of the journey was finding out how people find the inspiration to do something they value.” Once Amirkhani wrapped up his journey, he flew back home and partnered with Reardon to make a prototype of what would eventually become Always Sometimes Monsters.

There were several other people Justin met along the way that helped influence his decision, including James and Michelle Silva of Ska Studios, Ben Esposito, and Jenova Chen. “That’s one thing I saw [with James and Michelle Silva]: how to work in games and have relationship happiness,” said Amirkhani. “They’re a couple, they’re both game developers, they’re around each other 24/7. It seemed like such a comfortable situation.” With the others like Esposito and Chen, one of the things Amirkhani was amazed by was their passion and what he could learn from their best traits. “There are some developers that gave me great wisdom that has since formed the philosophies of the game. And then there are other people who I just saw living good lives. I sought to emulate that, I guess in some respect.”

This journey would help Amirkhani shape ASM into what it became, fueled by situations he was in and some that were philosophically emulated. “With the game, you have this opportunity to create all these variant versions of how the story goes,” said Amirkhani. “If you try to approach it objectively, and you take yourself out of it, and I do this primarily through understanding that every player is coming at it with a different character, a different continuity, different morality, all these different things. That allows you to get objective with it.”

Through this system, ASM took on a more morally-grey approach to choices, rather than going with a standard “Paragon/Renegade” metre or something to that effect. This is done by focusing on the concept of selfishness versus selflessness. For instance, early in the game the protagonist is given some hard drugs that you choose what to do with. You can dispose of it, hand it off to the intended person, or sell it for some cash. Being that your character is down on their luck at this point, you may find yourself wanting to do anything you can to get some cash.

In the next game, entitled Sometimes Always Monsters, Amirkhani and his team are looking to enhance that style from the first game. “The choice is directly the words you use. Your character now speaks in like these much shorter terms, but you’re more direct about and accurate with what you’re saying,” said Amirkhani. “That accuracy hopefully increases the ability for people to immerse themselves and fully believe in that character, because they know what is going to happen with every choice.”

When it comes to situations, Justin describes it in SAM as “painting with really big brushes,” where instead of individual scenarios, players are given an overarching narrative they have to deal with. “We start the game off with this wonderful scenario. You’re married, you have this amazing house. Life is great. It’s about trying to hold on to that. The selfishness is this is more about self-preservation and guarding your ‘pile of treasure’ like you’re an evil dragon,” said Amirkhani. “It is all going to fade away if …If you don’t respond to everything, it’ll slowly take it away from you.”

These aren’t the only changes coming to SAM. From a technical standpoint, Justin said that the graphics have gotten better and the resolution is higher. They’re also taken a lot of reserved steps along the way. ASM was a pretty well-received game upon its launch, and you’d think some developers would be feeling pressure from the community for what was coming next. Amirkhani, however, isn’t too concerned.

“In terms of like, dealing with the expectation of what his game is going to be, I understand that the players are going to expect something, and the game will every time be different. That’s part of the nature of this game anyway,” saidAmirkhani. “I don’t really worry about it, because I think the players trust us to deliver something that we think is like going to be meaningful to them. We’re not trying to waste anybody’s time.”

Amirkhani is concerned with his own personal expectations, however. He states that he is a harsh critic of his work, and if he’s not happy with the product that shows up on launch day, he’s going to be in a bad state. “It’ll happen with every game. It’s just the way it goes. You have these amazing ambitions and dreams for things, and then you fall short every time because, you know, you can dream so large but reality is a very hard thing to master.”

When it comes to working in Toronto itself, Justin really enjoys the city and the opportunities offered by it and the province to help support the studio. “We don’t get out and like, mingle as much as we ought to. Mostly because, you know, we’re secretly introverts that like slapping our heads on computers a lot. But we try and get out to events, like Bit Bazaar. It’s always great seeing everyone there,” said Amirkhani. “The culture is really accepting. Everybody wants to make games and do stuff, and people take the time to appreciate those teams who get to launch. It’s a really challenging thing and I’m glad to see that the city, in general, appreciates it and celebrates almost every single release that comes out of here.”

Now that the game is done, the team is preparing for launch, but they have taken a while to reach this point, it has been a long, but rewarding journey to get here. “It hasn't been easy.” Explained Amirkhani  “You can't just suddenly delay your game by 5 years and expect everyone to stick around for the ride. Naturally, you're going to lose a lot of faith in that process. You're going to lose people.”

“However, we've always known what this game is and have maintained a passion for it through all this time. It's been a challenge to keep morale as we slowly slipped into obscurity over the years, as people forgot and platforms got saturated. However, from the reaction we're seeing over our return there's still plenty of love for our little games out there. We're grateful for that, and it energizes us.”

As far as what’s next for Vagabond Dog, Amirkhani had told me they are focusing on Sometimes Always Monsters for right now “We're very focused on SAM at the moment, and will be applying a lot of the post-launch lessons we learned from ASM. The game's only available on PC right now, but we've been able to manage ports before. After that, who knows? We'd like to keep making games if people want to keep supporting us.”

“Seriously I can’t do a third game. The titles don’t work. I can’t come up with a good third one,” said Amirkhani. “On a larger scale philosophically, the games are just two halves of a whole. If you try and stick a third thing in the middle, it just breaks the synchronicity. So, knowing that it is the end, and largely making a game about the end, we have prepared for the ultimate demise.”

Sometimes Always Monsters is slated to hit digital platforms on April 2nd, so you won't have long to wait to dive back into the world crafted by Vagabond Dog.

↠ A Conversation With The Boss Baby’s Tom McGrath