Learn how to battle with Aegis' personalities 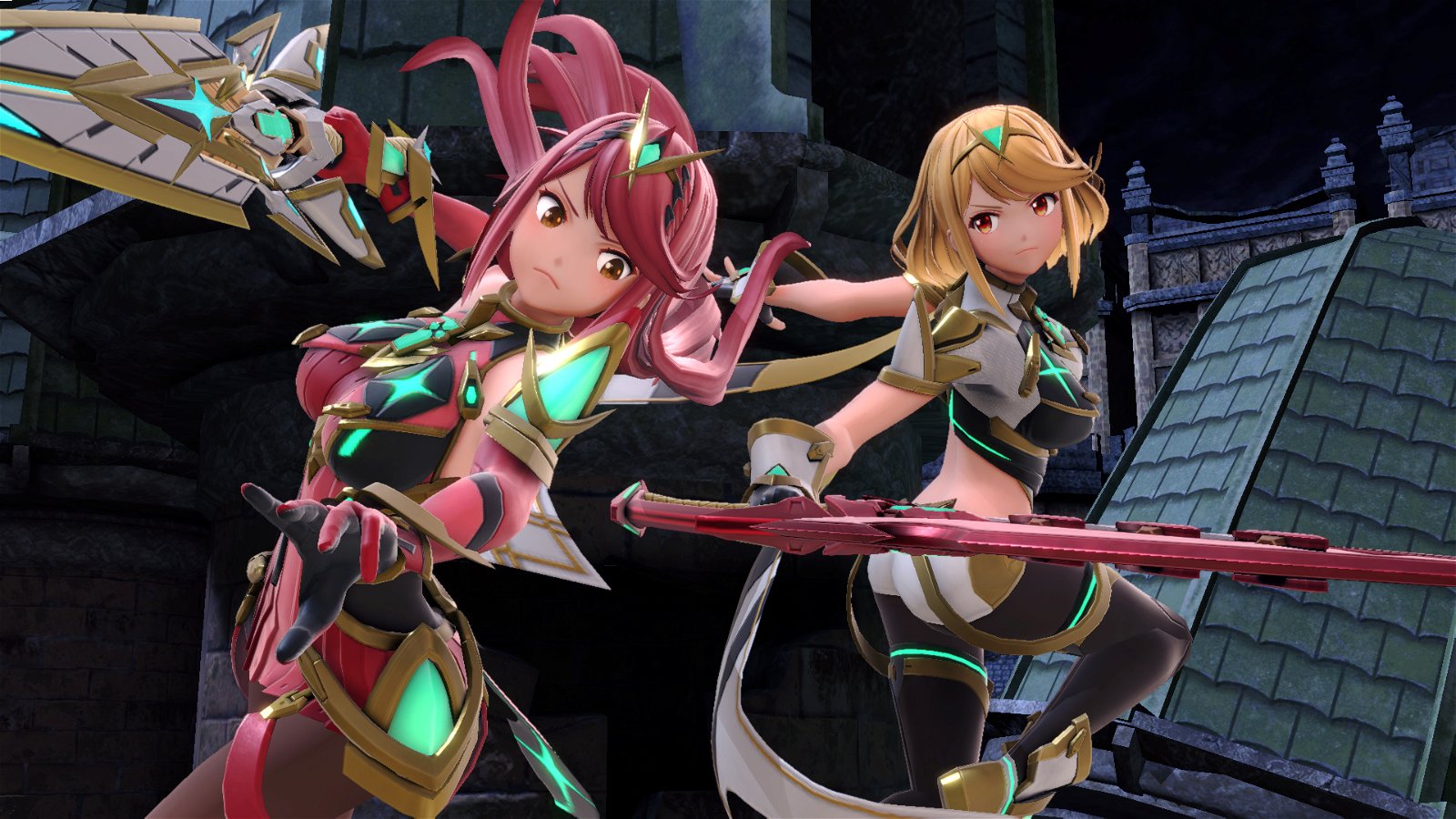 As announced in the Nintendo Direct last month, Pyra and Mythra are the newest additions to the game’s Fighter Pass 2. Sakurai recorded another intensive breakdown of their new moveset from the safety of his own home.

As both fighters are different personalities within the legendary sword Aegis, they function in the game like Zelda and Sheik did in Super Smash Bros Melee, with the ability to switch between them at-will by using the down-special move. Sakurai revealed that they had considered making Xenoblade Chronicles 2 protagonist Rex fight alongside them, as he does in the original game, but this would have been overwhelming to implement. The team had to make compromises to make the Ice Climbers work, and the new fighters have “probably the most complex design in the game” currently.

The biggest difference between Pyra and Mythra are their specialties—Pyra is stronger and uses fire attacks, while Mythra is faster and uses light attacks. Mythra can lap Pyra in a race and pull off combos easier, but Pyra has superior launching power, potentially knocking out enemies at 20% health with a fully charged side smash. Unlike Zelda and Sheik in Melee, their normal moves are largely the same in terms of animation, otherwise.

Pyra’s special attacks include the neutral Flame Nova, a charging spin attack; the side special Blazing End, where she throws her sword; and the up special Prominence Revolt, a jumping flame slash with multiple hits and the potential for maneuevering. Mythra’s are the neutral Lightning Buster, a forward attack with some protection from rear attacks during its animation; the side special Photon Edge, where she warps and charges forward; and two variable up specials, Ray of Punishment and Rainbow Dust, where she can rain down either one powerful arrow, or five arrows over a wider range.

Their Final Smashes vary as well, though both will summon Rex to perform the first attack, hitting up to three enemies. Pyra’s Burning Sword is meant to KO enemies, while Mythra’s Sacred Arrow is meant to deal a lot of damage and weaken enemies. Both moves are heavily inspired by moves from Xenoblade Chronicles 2. Rex also appears on one of each fighter’s taunts, and two of their three individual victory screens.

Sakurai claims that there is no clear advantage, and that Pyra and Mythra each excel in different situations. He expects most players will start with Mythra to weaken the opposition and switch to Pyra to launch them, but also anticipates players will find other innovative strategies. However he did add that Pyra is his personal favourite, solely “as a fighter.” Unlike some fighters, they will have their English voices implemented outside Japan.

Their new stage is the Cloud Sea of Alrest, a floating stage on the back of the Titan Azurda or “Gramps”, on whose back Rex lives. Other Titans will appear in the background as Gramps moves around, while various party members will appear on the stage to cheer fighters on. Players will need to be careful on Gramps’ head and neck, as he sometimes turns to look at other Titans, thereby changing the stage composition.

Sixteen tracks will be added to the game from Xenoblade Chronicles 2 alongside Pyra and Mythra, including three new arrangements. Tracks from the original Xenoblade Chronicles will be playable on the Cloud Sea stage following the update, and the sequel’s songs will likewise be available on Gaur Plains stage.

With a new Smash character comes new Mii Fighter costumes. In this instance, Pyra and Mythra will be followed by a wave of Capcom DLC. From Monster Hunter, the Hunter and Rathalos Equipment options will arrive for Mii Swordfighters, as well as a generic Felyne hat. Arthur from Ghosts n’ Goblins will be a new option for Swordfighters as well. Each will be available for 75 cents US.

There will also be a new Xenoblade Chronicles 2-themed Spirit board featuring characters from the game, including an evolvable Master Driver form of Rex and Pneuma, both of which Sakurai did not want to spoil on the presentation. The team discovered there was no official artwork of Pnuema from the game for them to use, so main character designer Masatsugu Saito of Monolithsoft created a new artwork for them.

Sakurai concluded the presentation by announcing Pyra and Mythra will be available later today. They can be purchased individually for $7.55, or as part of the Fighters Pass 2 for $37.79 CDN. He also lamented that there are only two fighters remaining, and therefore only two more opportunities to introduce a new character to fans.