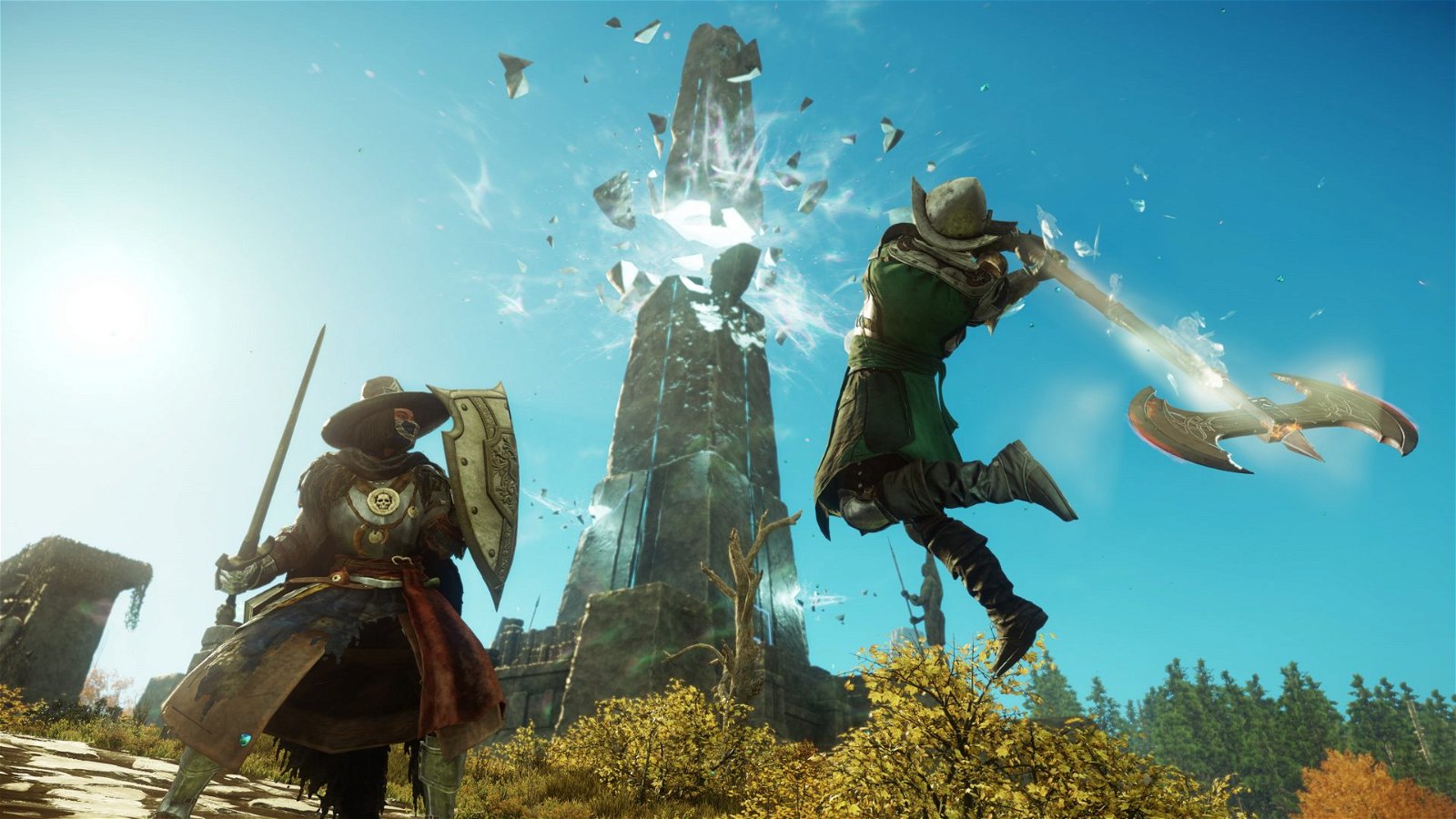 CGM has previously covered Amazon’s upcoming games, with a look into the now-canceled Crucible last year, but this time around things are getting a bit more medieval with New World—a fantasy MMORPG that mixes a lot of what you’d expect from classics like World of Warcraft with a lore-heavy, team-based dungeon crawl.

While I can’t speak specifically to what the base experience will consist of in New World, or what some of the other new features will entail, I was able to try out the newly-announced game mode, Expeditions, where a group of five takes on a PVE-instanced dungeon.

Meeting up with developers Parabox and Miss Bliss, myself, and CGM’s Jordan Biordi, ran head-first into an ancient mine known as the Amrine Excavation in search of a lost expedition team, lead by the renowned Simon Gray. Suited up with heavy armour and a spear, I made my character our team’s frontline tank, while Jordan went with a more speed-based melee character. Parabox maintained the heals for the quest, while Miss Bliss was our team’s magic-user. The skill trees and equipment available allowed for a ton of customization, where players could go down completely different paths if they so desired.

Together, the four of us began fighting through hordes of varying enemy types from The Lost—a group of immortal souls who are trapped on this island. From ghastly bat-dragons to creepy, writhing spirits, we had our hands full as we made our way deeper into the abyss.

The unique challenges and environmental puzzles that followed kept us enticed, but while the world looked lovely and the lore had us interested, the doom ahead was about to change things for the party in ways we had yet to truly understand.

As we massacred a group of enemies coming to hamper our forward progress we began to collect loot which would help our cause. Some areas would be filled with more challenges and end with a chest or two to collect, while enemies also drop their own items on rarer occasions.

It was nice that each loot drop was able to be collected by each member of the party, where I might get an upgrade to a gauntlet and a teammate may get a tougher spear to grapple foes with. While our magical comrades had a great time utilizing fireballs and charms to aid the party, the melee-using members found a bit more of a hack-and-slash feel to each encounter.

While the combat isn’t bad by any means, its rigid build and set of abilities being spammed constantly made each encounter more similar than what you would have expected from taking on such different enemies. Additionally, the AI would heavily target whomsoever made the first move, often chasing them down halls endlessly regardless of accompanying strikes by others in the party. It’s unclear at this time whether these issues are only due to the preview-build or if that’s something to look out for at launch.

Finally, making our way to a large chamber, we encountered several plates that needed to be stepped on in unison to open a pathway across a ravine. These sorts of basic puzzles were something we would have to solve a few times but the focus was mainly kept on combat and looting. Beautifully crafted halls and detailed enemies made what we were looking at feel more alive, even after decimating their ranks.

Following a quick fight with some large, brutish maulers, we made it to the end of the expedition, where we encountered the largest of these aforementioned brutes. To our surprise, it was the very Simon Gray we were searching for! But he had become a monster, and after a brief discussion, we attacked.

Several attempts later and we were finding this task to be more than we had bargained for, as the journey was meant for five, but we only had four in our group. So after we could no longer face up to the great Simon Gray, our powerful magic-user Miss Bliss took the enemy on solo, defeating him by debug-menuing him to death.

Unfortunately, scaling for smaller-numbered groups was not a part of this game mode, and while the developers discussed that being something they would look into, it did not seem like at this time that would be a feature at full release, meaning these Expeditions would require five to be a fair fight.

Regardless of our failures to complete the trial, it was an enjoyable experience, and one I could easily see myself tackling with friends. Working together was a must, which added to the fun-factor, but too much of what you were doing didn’t change from encounter to encounter, dulling the strategy as well.

The one mode we were able to try out was a good teaser, nonetheless, and while I wished we could’ve seen more of what the normal solo experience would entail, it was enough to get excited for the upcoming launch on August 31st, 2021.

Beyond the Expeditions mode we tried out, the developers pointed out that they had taken a great amount of fan feedback to heart and were planning on changing several portions of the game to better create the experience they were hoping to end up with in August.

A revamped crafting system, with discoverable recipes and new materials, is in the works. More modes, including the 20v20 Outpost Rush mode would be available. New weapons like the spear, rapier, and ice gauntlet were implemented. Faster, more responsive gameplay, hit registration and revamped weapon mastery trees all spice up the combat. Achievements, titles and ranks, duelling, incentives to own territories, and fast travel also have made the cut, adding up to a ton of new features being added ahead of launch.

On top of that, a major emphasis from the developers was on future content, where years and years of additions are planned as the studios developing New World look to support their creation way beyond the release.

All in all, for those who enjoy MMOs and are looking for something new to wet their whistle, I wouldn’t hesitate to recommend giving New World a look.