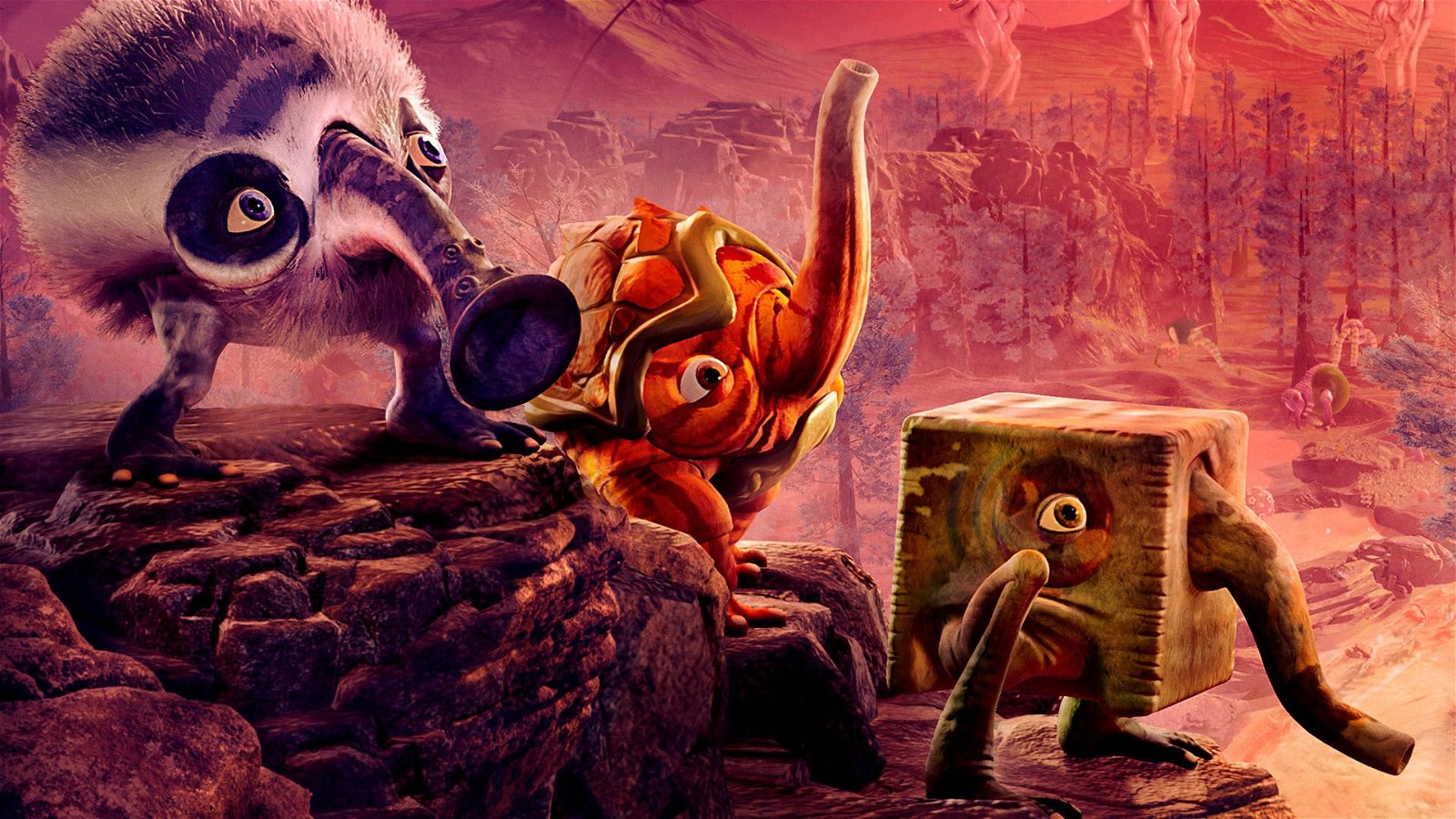 Guerilla Collective returned to kick off another round of early E3 reveals, giving indie developers a platform for their latest projects in 2021 and beyond.

Titles ranged from the pixelated, story-driven narratives to full 3D platformers announced by experienced independent studios. Many of the games were also available for pre-order right away for the PC platform, while other releases were confirmed for PlayStation, Nintendo Switch and Xbox. Guerilla Collective’s second livestream would only give viewers a taste of more indie titles to come at an all-digital E3 2021 across June. The event was tied into multiple summer gaming events from GameSpot, IGN and Geoff Keighley’s own festival.

A chunk of Guerilla Collective’s live show focused on indie games which took notes from AAA classics. Anno: Mutatonem by single developer Pingwen Zhang blends 2.5D action with Persona for a tech-driven action adventure. Players control a lone warrior with access to melee and ranged weapons, taking on large creatures and street gangs. Its setting comes inspired by Cyberpunk‘s own Night City, with players navigating the underworld across days and nights. The brief snippet showed off some rooftop platforming and fighting groups of enemies across the game.

Players looking for a classic setting can fight their way through Taiwan in 1909. The Legend of Tianding by Taiwan-based studio CGCG is inspired by historic events, told as a fast paced 2D beat-em-up. The streets of Taiwan are taken over by its underworld and occupying Japanese forces, setting the stage for main character and folk hero Liao Tianding. He can use a variety of melee weapons and his own mix of light and heavy attacks for taking down groups of enemies. They can also counter attacks and coordinate their moves to rack up a combo counter before using special abilities. Players can also play casino games and chat with Taipei’s residents to push Tianding‘s journey forward.

More action came through an accolades trailer for ArtPlay and 505 Games’ Bloodstained: Ritual of the Night as a sleeper hit. Trifox, Glowfish Interactive’s newest top-down shooter put players in the wastelands of an apocalyptical mine. Three foxes harness ranged weapons to fight the wasteland’s bloodthirsty enemies, through a set of single player missions and an arsenal of turrets.

Moroi by Violet Saint also takes on the top-down camera format in a horror-driven dungeon crawler, as players navigate through dark catacombs filled with monsters inspired by Diablo and The Evil Within. Ultra Age by Intragames was inspired by Devil May Cry as an action adventure game, putting players in the shoes of a familiar-looking devil hunter who fights large creatures in the modern day. Like the source material, Ultra Age blends melee combat and shooting to keep the damage going in high octane boss fights. Kung Fu Kickball by Blowfish Studios would bring players together in a multiplayer driven game of soccer. The mixes Super Smash Bros in with soccer across a 2D field, as players control a fighter to score a ball. First released in 2020, Kung Fu Kickball‘s latest update adds The Monkey King into its roster.

Free roaming 3D adventures were also a growing genre for indie studios. Eternal Cylinder was revealed as ACE Team’s open world platformer involving a small alien with the ability to change elements. Players can roam the strange human colonized planet and assume different states of matter to fight other creatures. They will also discover what happened to the colony as they continue to evolve as one of the planet’s original residents.

Other open worlds in titles like Prideful Sloth’s Grow: Song of the Evertree give players a chance to roam across a colourful fantasy realm. Mysterious dark forces have taken over the land, as a young girl is tasked with finding the key to liberate her village and neighboring regions. Grow takes cues from Breath of the Wild and Immortals: Fenyx Rising for its action adventure format, but adds some unique characters (including a talking mystical book) to guide the story. Players also need to use their environment to solve puzzles and meet more characters for quests across a lengthy journey.

Indie players can also set their iron sights on a variety of new dystopian IPs, with shooters making a presence in Guerilla Collective. David Lynch, BioShock and WW2 come together in first person shooter Industria. According to developer DT Gaming, the single player driven campaign pits players against enemy soldiers and mechanical hounds across a desolated backdrop in an alternate Cold War-era East Berlin. Abandoned cities and settlements are now filled with robots and other cybernetic abominations shuffling through the checkboard floors. But players will need to scavenge for enough ammo and firepower to fight back against the creatures, inspired by a growing manufacturing industry which powered through the global crisis across the turn of the century. More 3D shooters headlined the livestream, with All In! Games’ ChernobylLite. Players wander through Russia in search of their wife in the face of mutants.

In true simplistic indie fashion, players could fly around in a spiritual spin of Asteroid. A lone arrow-shaped ship dodges past a swarm of bullets in an endless assault. GrahamOfLegend’s Super Space Club adopts this format for a frantic top-down shooter, with chances to upgrade weapons and racking up a high score. Players could also assume the role of another lone sprite in Nifflas Games’ Ynglet, inspired by cells and molecules to create its unique space bubble setting. Players handle music, its rhythm and platforms for completing a set of courses. Before the song ends, they will also have to collect as many molecular creatures as possible to grow and expand.

Not all of Guerilla Collective’s games involved action heroes in titles like Endling by Herobeat Studios, first unveiled at Gamescom 2020. Players control the last surviving mother fox, tasked with guiding her children through an exploited earth. Humanity is running short on resources, while animals are also a rare sight to see. To prevent extinction, players have to continue nurturing their children while they progress with a set of life skills along the way. They also have to move their family through human settlements and avoid being detected.

Beasts of Maravilla Island by Banana Bird Studios takes its shot at a Pokemon Snap title, with players assuming a photographer with an eye for large mythical beasts. Players can roam around a variety of bioluminescent forests in search of the perfect shot; taken with timing for maximum effect. In Reptoid Games’ Fire Tonight, players have to bring a young couple together for an awesome date night. The problem comes with a large wildfire engulfing their city while they have to navigate through security guards and blazes to survive. They also have to solve puzzles like fixing a transformer box for making calls or putting out a blocking fire before reuniting with their loved one.

RPG Time: The Legend of Wright by DeskWorks (first announced in E3 2019) takes a spin at 3D paper animation, with players navigating a character through drawings in 2.5D fashion. The story is set in an empty classroom as a child creates their own RPG game ahead of a bright future in game development. Their hero fights enemies in a fantasy setting through turn-based combat and platforming. Certain bosses can only be taken down with a cardboard gun in the game’s “real world” or by flipping through another page to change the scenery. RPG Time is also inspired by a childhood love of creating fantasy, as the game unfolds with a young (unseen) character’s collection of origami and cardboard objects. The drawing go deeper with pop-out books, which switches RPG Time between the 2D and 3D planes.

Survival Quiz City by Phoenixx takes a note from Fall Guys as a multiplayer 3D platformer. Players can be eliminated in a set of arty games, all driven by a shared disdain for real life trivia. Getting the wrong answer can literally send players over the edge of maps, or leave them with less as Survival Quiz City continues. In true game show fashion, the game only ends with one surviving winner.

Guerilla Collective’s latest showcase follows up on their first event from 2020. The program continues into June 12, 2021 with a second livestream where indie studios make more announcements for their games.