The Debut Project From a New Canadian Creator 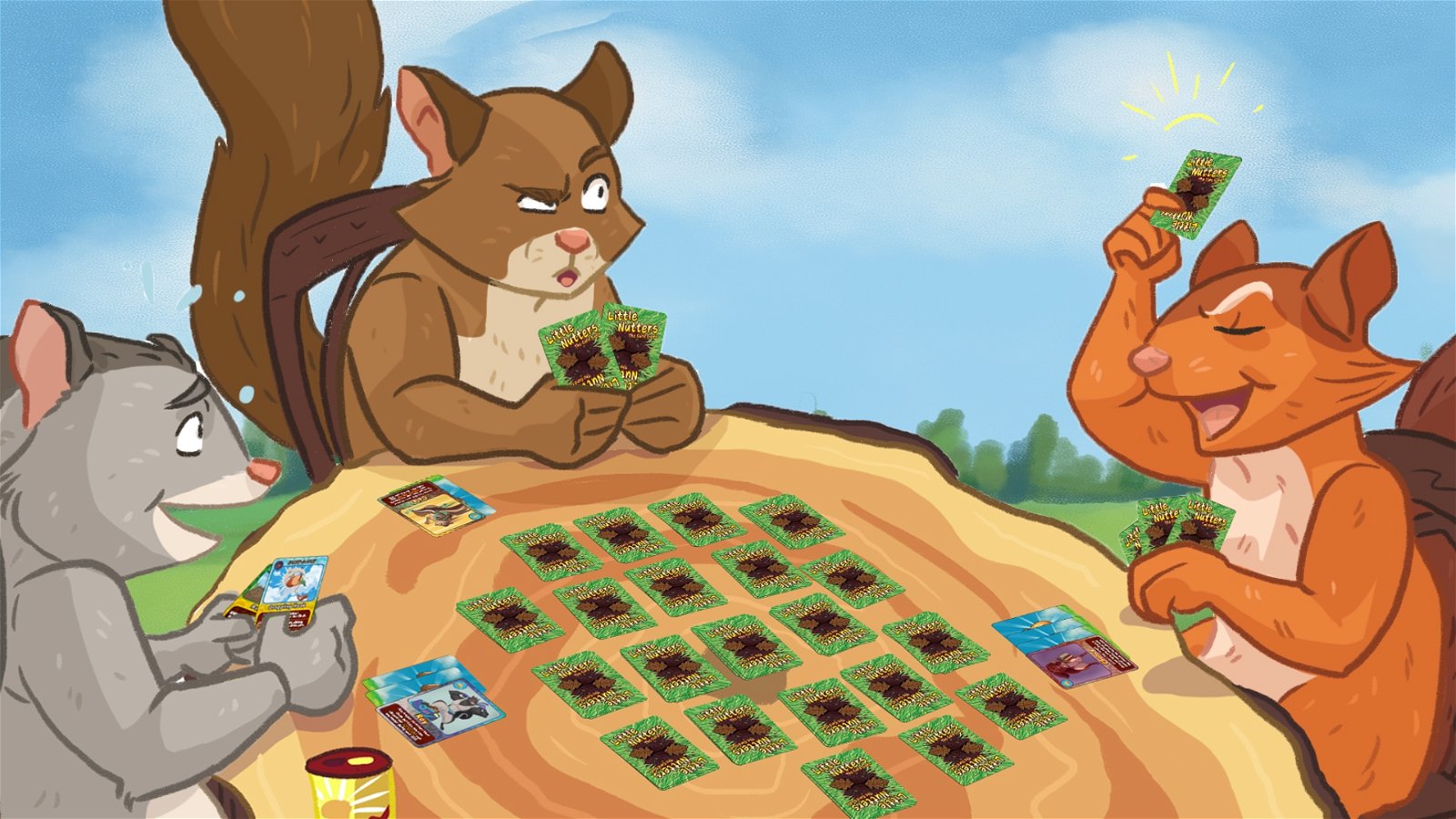 Launching on Kickstarter June 30, Little Nutters is a kooky card game that puts players in the paws of squirrels, competing to secure food for winter.

CGM had an opportunity to preview this new card game, which follows in the footsteps of other lighthearted party games with a touch of risqué humour like Exploding Kittens and Unstable Unicorns. This is the first game created by GameKnights, an Ontario-based tabletop company, and features cartoon art by illustrator Anthony Wallace.

In Little Nutters, players are squirrels who have been toiling away and stashing food. But now winter is approaching and you need to retrieve the nuts you hid—and you don’t remember where they are. You’ll have to compete against 1-5 other players to find or steal enough Nuts, buried in stacks of cards.

Players are assigned character cards at random, each granting a unique ability that can be used so long as that player isn’t currently in the lead. Some automatically negate hazards, while others enable strategic plays.

Gameplay in Little Nutters is broken down into two parts, the Patch phase and the Play phase. In the first half, the active player can pick one of the 27 patches of dirt and either Dig, Excavate, or Search it. Digging simply entails revealing the top card of their selected patch and facing its consequences. Best case scenario, you’ll turn over a Nut and tuck it away into your “Nut Sack,” one step closer to victory; however, this can also turn up an Obstacle that ends the phase, or an Animal Attack that halts your turn altogether.

For more strategic play, you can choose to Excavate by discarding 2 cards from your hand, then taking the top card into your hand and ignoring its effects. If it’s a Nut, you profit, but if it’s anything else, you ignore the potentially harmful results. So long as a hazard doesn’t get in the way, players can continue Digging and Excavating as long as they like until their chosen patch is depleted. Alternately, you can discard 1 card to Search one patch—look at all the cards in it, return them, and move on to the next phase.

Things can get nastier when Little Nutters shifts into the second phase. Players can use one card from their hand to buff themselves, debuff the competition, or outright steal Nuts from others. When a Bust-A-Nut card is played, the top card of the deck is revealed, and an effect occurs based on the revealed card’s symbol.

Gameplay moves along quickly and things can turn nasty as daring heists and cunning defences come into play. Throughout, Little Nutters‘ bright art entertains, and its mix of puns and pop culture references adds to the fun. Its terminology may expose the dirty minds in the room, but for the most part this is a playfully risqué game that’s almost safe to play with grandma.

Little Nutters launches on Kickstarter on June 30, but you can view its campaign page here now. An early bird promotion is available for those who order their copy in the first 72 hours, featuring a discount and a special bonus card. If you’re looking to dig up a playful new game to celebrate playing games in person again, this might be just thing you need.