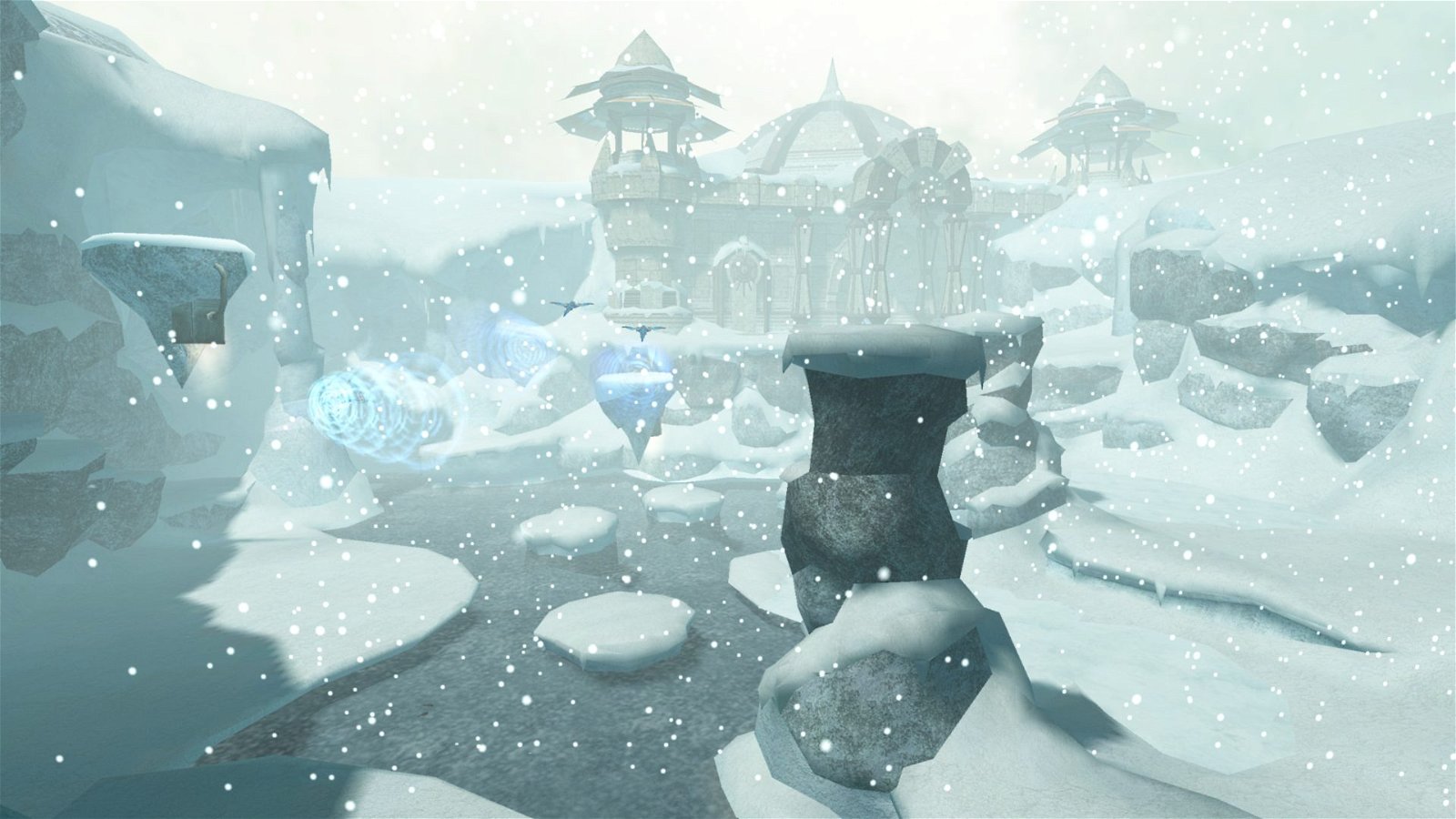 Summer has officially kicked off with record-high temperatures across a lot of Canada, so let's take a break and cool down with some of the best ice levels in gaming history.

Games, as a medium, provide respite from real world, and what would we want to avoid more than a literal fire in the ocean, or 50-degree temperatures? So to help give you a little inspiration and get you thinking icy thoughts, I've collected a list of my favourite ice levels from gaming's past.

A lot of games throw in at least one snowy environment, but what makes a truly great "ice level"? My selections below do something more than just introduce a white colour palette to diversify backgrounds. As we'll see, these areas tell us something about their games' stories and/or protagonists. Booting up your favourite installment of SSX may accomplish the same thing, but most of these levels go a little deeper.

One caveat before we begin, however. I'm a huge Star Wars fan but you won't see any Hoth levels on this list—I took them out of the running because there are so many of them. Hey, Star Wars game devs? As we enter a new era of video games for the franchise, keep in mind it's okay not to go to Hoth or any other frozen planet.

Without further ado, let's get into it with...

For all the drama that preceded its launch, the current generation of Pokémon games got off to a strong start sales-wise, and took a victory lap with a two-part expansion pass that adds two new Wild Areas to the Galar Region. The second, the Crown Tundra, is home to a smattering of new legendary monsters, a den where most legendaries in the series can be found, and one of the most visually interesting areas in Pokémon Sword & Shield.

From the station, trainers come across the humble hamlet of Freezington, where villagers carve out an existence and tend barren fields. The quest line takes players through winding caverns and across snowy fields to the Crown Shrine at the peak of a mountain. To the south of the region, where temperatures rise a little, grows the Dyna Tree where Galarian variants of the Legendary Birds can be found, while the Regi line dwells in ruins scattered throughout.

The Crown Tundra is a great place to go after becoming Champion. Unlike the snowy regions in the core game's later phases, it's a fully-developed region that doesn't feel like it's just checking a box on a list of climates. More than "just the ice level," it really shows what the concept of Wild Areas could bring to the franchise.

Okay, there isn't much subtext here—this ice level is just great. Sonic starts Act One on a snowboard for some reason, explores frozen caverns, and then busts out onto the surface to race across the mountain in Act Two. Knuckles gets a similar path with the cartridge add-on, spending more time inside the mountain. And all the while, you're accompanied by one of the best tracks in Sonic history.

From early on, Sonic games struggled to maintain the balance between their "gotta go fast" attitude and players' natural impulse to stop and smell the roses a little. Sonic 3 & Knuckles didn't always walk this tightrope perfectly, but Ice Cap Zone is one of its best levels. The setting interacts with common gameplay elements naturally without interrupting the flow too much—you may need to break the frost covering a spring or smash platforms through walls, but as a follow-up to the drudgery of Carnival Night Zone, Ice Cap Zone feels like peak Sonic again.

And seriously, the music is so good here. This might just be the best soundtrack to an ice level, ever.

After a certain infamous death scene, Final Fantasy VII moves on with an excursion toward the north pole. Cloud and his party reach the frosty town of Icicle Inn, snowboard down the mountain, and cross the labyrinthine Great Glacier, where they're likely to pass out from exposure. After a brief respite, they still have to traverse the caverns of the Gaea Cliffs, doing a minigame to stay warm while climbing walls of ice. Disc One built to a powerful emotional crescendo; disc two then indulges in an extended icy sojourn to give the characters and player time to reflect before raising the stakes even higher with the long-anticipated "Reunion" at the North Crater.

Switching up its gameplay with temporary mechanics is one of Final Fantasy VII's enduring strengths, and this series of ice levels is a perfect example. Snowboarding was a fun minigame, enough to spawn its own spin-off title in Japan, and the two icy regions have interesting unique mechanics. The icy setting evokes the cold touch of death, which now hangs over the party after losing one of their own.

And hey, you get to "fight" icicles in battle in order to open new paths in the dungeon—a pretty unique touch.

Originally developed as a hobby and training project by Microsoft programmer Chris Pirih, SkiFree was distributed in the Microsoft Entertainment Pack series and in cases of blank floppy discs. Although it didn't make it into the core Windows software like Solitaire, Minesweeper, or FreeCell, it was one of the most popular games featured in the series and still elicits a strong nostalgic response from a generation.

The skiing experience is fun and involved for a small game developed by one person at the start of the Windows era, and it remains a charming way to burn a little time to this day. But what really sets it apart is the infamous Yeti, who descends upon the player after they've cleared the 2000-meter course. Suddenly, no matter which game mode you were playing, SkiFree becomes a frantic quest for survival. Will you outrun the monster's fangs, or will you crash into a tree trying?

There may not be any deeper meaning, but for all the early nineties kids who were traumatized by the yeti in their elementary school computer lab, there may be no more iconic ice level. (Did you know you can still play this fundamental piece of PC gaming history for free on Classic Reload?)

It was truly difficult to choose between this and Metroid Prime's Phendranna Drifts. So, since both games released in the same week and featured exemplary ice levels—a first for the series—they can share top honours.

A fairly early area of Metroid Prime, the Phendrana Drifts are a pretty sharp tonal shift. Samus arrives in the area and must blast through ice that blocks the hallway. She emerges into a large open space where snow crunches beneath her feet and chunks of ice float on water. Enemies can temporarily freeze her visor over as she explores. All the while, a serene piano melody floats in the background like the snowflakes lazily fluttering from the sky.

Quiet, unsettling atmospheres have always been a hallmark of Metroid but the Phendrana Drifts were, at that point, the most natural-looking environment it had featured—a far-cry from previous games' 1980s-horror/sci-fi-inspired environments. Meanwhile, as the GameCube title presents a jarringly serene natural space, its Game Boy Advance sibling used a similar, artificial setting to illustrate something about the series' protagonist.

If you've played the Metroid series, you know the titutlar Metroid creatures are weak to ice. They're nigh-invincible jellyfishes of brain-eating doom until you hit them with an ice beam or missile. In the start of Metroid Fusion, Samus is attacked by the voracious X parasite, and is only saved by an infusion of Metroid DNA.

The implications of this are starkly shown when Samus tries to enter the Sub-Zero Containment area or the arctic climates of Sector 5. With the series' signature subtle characterization, we realize Samus has been forever changed by the X parasite encounter—the formidable hunter now takes damage from extreme cold, hoisted by her own petard. She must obtain the Varia Suit upgrade to explore sub-zero areas safely again, and we can discover the Winter Wonderland that is Sector 5.

And well, there you have it! Five frozen worlds that might not only chill you from the inside-out, but offer up some potent game design in the process. (Or maybe being chased by a hungry yeti is enough to make you appreciate the summer heat.) What about you—did your favourite ice level make our list?