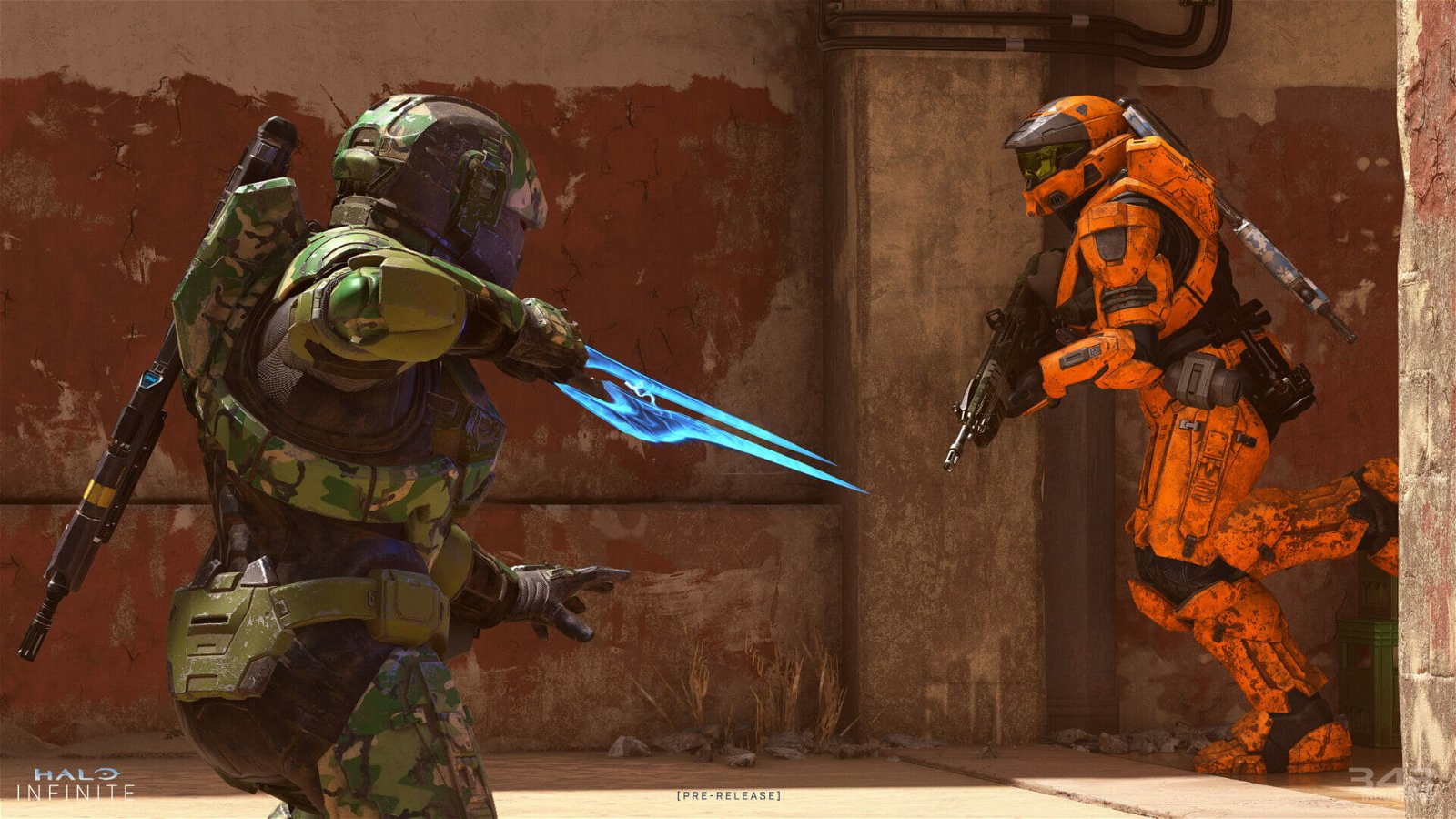 The last few days have been great for Halo fans, especially if they happen to be Xbox Insiders.

This past weekend Halo: Infinite developer 343 Industries (343i) gave a select number of gamers on an early taste of what to expect from Halo: Infinite’s Multiplayer experience, which will be free-to-play when it launches alongside the game’s equally highly anticipated campaign mode this holiday for Xbox and PC (my colleague Clement Goh’s impressions of the PC technical preview can be read here). That “taste” came in the form of a limited beta, referred to by 343i as a “Technical Preview” which initially allowed players participate in 4v4, PVE Team Slayer matches against Spartan-level bots on two of the game’s original levels, Recharge and Live Fire.  On Sunday however, the PvP Arena Slayer gametype was added, along with a third map, Bazaar, opening everything up for full, 4 on 4 player matches.

Unfortunately, while the technical preview was scheduled to last for the entirety of the weekend, for the purpose of gathering focused, live multiplayer data the actual time windows in which participants could play alongside or against other human players were restricted to a pair of 2-hour time slots each day, making for a somewhat solitary experience outside of those peak periods.  Nevertheless, with no guarantee of getting into the next flight of testing, I was happy to take whatever Halo Infinite multiplayer sessions I could get.  I ended up partaking in both the Friday and Sunday evening sessions, which were the easiest for me to work around my schedule.

Even before diving into the multiplayer on Friday I was delighted to discover that an upcoming Spartan Academy feature, Weapon Drills had made it into the preview as well.  This is a firing range-based challenge mode that allows players to practice their proficiency with several of the game’s standard weapons, from old stand-bys like the BR75 Battle Rifle and the Pulse Carbine to newer, more unorthodox weapons such as the Spartan-disintegrating Heatwave.  A warm-up/practice mode like this is a must for any competitive shooter and I’m happy to see that 343i is incorporating bits and pieces of what works from games like Apex: Legends and PUBG, even if they are smartly avoiding the Battle Royale craze on the whole.

Speaking of warming up, I was rather apprehensive at first to the idea of bots in Halo competitive multiplayer, but after going toe to toe with them over the past few days I have to concede that 343i’s bots, while not perfect are still on another level.  They evade fire, they take cover, and they appear to adopt patterns and winning strategies employed by real players, enough to prove a formidable challenge against a team of human players at least.  Its my hope that 343i will continue to evolve these bots so that they can fill empty slots on uneven teams without being a detriment to their human teammates, and that they can be swapped out with live players that arrive before the game’s midpoint to keep the balance as even as possible.

During the preview I used both the standard Xbox Wireless Controller as well as my Xbox Wireless Elite Series 2 pad (simultaneous keyboard and mouse controls are also supported) and I found the controls to be both extremely familiar but also completely refreshed at the same time, with the game’s support for up to 4K at 120 frames per second making aiming and shooting snappy and precise (except when matches were negatively affected by lag).  It had been years since I had seriously played a Halo 5 multiplayer match but within an hour of picking up a controller it all fit together like putting on a pair of favourite gloves.  The difference maker this time around however is the return of Halo 3-style equipment, in particular the Grapple Shot, which when combined with Halo 5’s returning abilities such as mantling/clambering, sprinting, and sliding widens and transforms the ways that traversal and other support tools can be employed in combat.

“The Halo Infinite Technical Multiplayer Preview is more or less over at this point, but based on what I’ve played so far I’m extremely excited about the next round of multiplayer flights.”

Similar to Halo 3, players can pick up an equipment item in the field and can use it at their leisure (but if they die without using it the item can be collected off their body by an ally or opponent).  Some items, like the Threat Sensor or “power weapons” like the Overshield and Stealth Camo have only one use, while others like the Portable Shield and Grapple Shot have a limited number of uses that operate on a cooldown, but these cooldowns tend to be fairly short, allowing them to be chained with other abilities.  For example, it’s possible for players to go from a full out sprint into a slide, then use the Grapple Shot to catch the corner of a building and launch themselves out of that slide onto the roof of said structure, making themselves a hard target across open terrain as they press the attack on an enemy that’s camping on higher ground.  The maps are designed in such a way that there are no places that the Grapple Shot can access that players can’t normally reach by jumping, climbing and or taking another route, but obviously the Grapple Shot will get them there much faster.

Meanwhile, the Portable Shield tool no longer provides a full dome of coverage, but it’s curved matrix of smaller, rectangular shields can be fired out of and the short cooldown makes it possible for one player to lay down two shields back to back within short succession of each other, which is great for defending a choke points or forcing the enemy to engage you within the makeshift bubble (just make sure to be ready with a shotgun and be mindful that they can still punch holes in your shield or even ricochet grenades in through the gaps).  Based on what I’ve experienced so far, players whose fondest memories of Halo are Halo 3 and/or Halo: Reach are going to LOVE Halo Infinite multiplayer.

The three maps on offer, Recharge (a labyrinthian power station with shifting platforms), Live Fire (A Spartan military exercise base) and Bazaar (a multi-leveled marketplace slum with the occasional chicken flapping about) are all great sandboxes for the aforementioned traversal and verticality that Halo Infinite is bringing to the table, and I simply wasn’t able to pick out a favorite during the short time that I had with the preview.  They all have little nooks, crannies, and open areas that I both love and love to hate, and with the multiple mantling opportunities afforded in each map I never felt completely cornered or trapped when a firefight failed to go my way.

As far as I could make out presentation-wise, the technical preview ran at the max that my LG gaming monitor can handle, which is 1440p/120fps, and as recent sneak-peeks have already shown, the art style of Halo Infinite in both campaign and multiplayer aim to strike a balance between the modern, high-fidelity graphics expectations of today with the nostalgic, stylized and almost caricature-like look of the older games, and that aesthetic carries across the designs of the multiplayer Spartan Armor as well as the preview’s three maps.  If pressed I’d have to say once again that the game evokes the look and tone of Halo 3 and Halo: Reach far more closely than it does Halo 5, and I’m pretty sure most of us will agree that’s a good thing.

That said, the term “technical preview” was an apt choice of words to describe what 343i had on offer this past weekend, because the number of bugs, failed matchmaking attempts, lengthy black load screens and other rough edges I experienced while participating in the preview were far more rampant than any “early demo” or “beta” I’ve played in recent memory.  It was truly a narrow, vertical slice of a game that still has a lot of work ahead, but the good news is that “Holiday 2021” is still at least three months away and that the preview doesn’t represent the most recent build.  The key thing I took away is that the bones of the gameplay are solid, which is paramount in a Halo game.  Regrettably, lag was an issue that I encountered just about every two to three matches, and when it occurred it often seemed like enemies were teleporting a couple of seconds into the future right before they killed me or that my perspective would jerk violently left or right each time I fired at a moving target.  I have a fast and reliable internet connection that is already optimized for Xbox Live, so I hope that there are significant improvements on the game server’s side between now and release.

I didn’t spend much time exploring the Armory or Battle Pass elements of the preview, given the limited time there was to experience the game itself.  What I was able to gather though was that visual customization of one’s Spartan will be deep, and that players can at least expect personalization to be on par with what we had in Halo Reach.  And on that note, I have to say I’m extremely happy about the addition of custom AIs to the game, which not only provide important information to players in the field but also serve as secondary announcers and cheerleaders to players as they perform impressive feats in battle.  There were four distinct AI types available in the preview, including one that to me sounded a lot like a coked-out Elijah Wood, and I’m looking forward to many more “guest” AIs being added to the game over time (they’ll likely be microtransactions I’m sure, but hey, the possibility of having Conan O’Brien as a voice in my head during a match of Capture the Flag is a cosmetic I’d gladly pay some scratch for).

The Halo Infinite Technical Multiplayer Preview is more or less over at this point, but based on what I’ve played so far I’m extremely excited about the next round of multiplayer fights.  Perhaps I’m being overly optimistic, but for the first time since the stewardship of the Halo franchise was passed from its original creator Bungie to its current stewards Microsoft and 343i, I’m starting to feel confident that the franchise is finally in good hands.