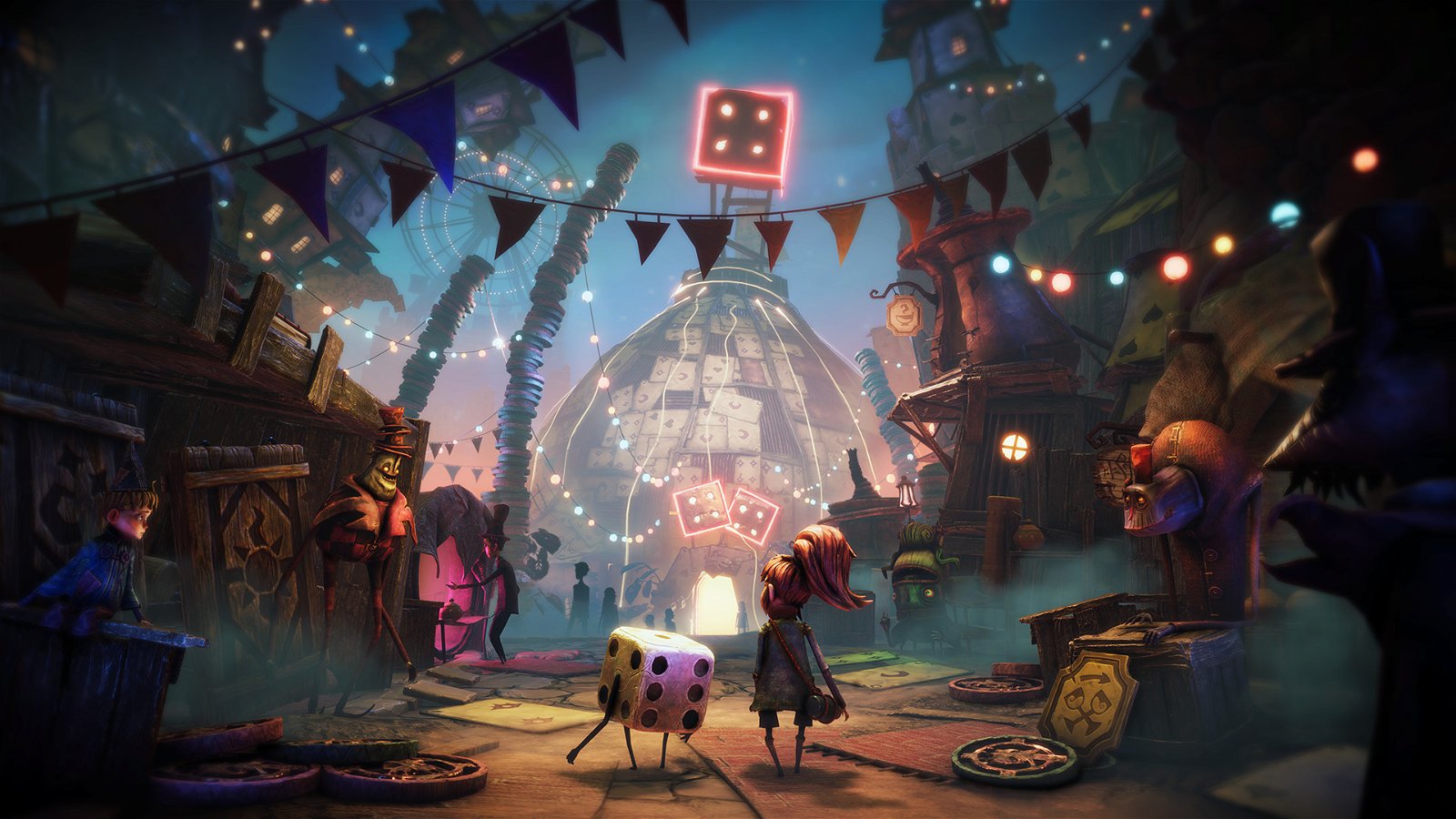 Lost in Random feels fresh. Developer, Zoink, has crafted a strange game thanks to its strange mechanics and an even stranger world, one that defies easy description. I spent a few hours playing the intro a few weeks ago, and I can safely say that it is a fascinating game that feels good to play despite several concerns I have with its construction.

Set within the world of Random, we follow the journey of a young girl named Even on a quest to save her sister. Random is ruled by an evil queen, whose rolls of the only magical dice in existence determine how the inhabitants live. For example, when a child reaches the age of 12, the queen rolls the dice to determine which town that person will spend the rest of their life in.

Even’s sister, Odd, rolls a six, and is whisked away to spend the rest of her life in Sixtopia. When Even sees a vision a year later that seems to be her sister calling for help, she goes on a journey through Random in order to rescue Odd. Along the way, she gains the help of an anthropomorphic die named Dicey, who speaks in squeaks that are so charming I could not help but fall in love with the little guy.

It feels like a cop-out to describe the world as a Tim Burton-esque creation, but that’s only because that style pervades the entire game. Rickety houses that stand on stilts framed against a black night sky and people with large furry and amphibian faces walking alongside people with elongated limbs radiate creepiness at every turn. The visuals, which appear to be a cross between classic stop-motion animation and clay, draw you into the world easily and are captivating in the opening hours.

Yet at the same time, it feels empty. Random is expansive, with large open squares and narrow streets interchangeably dotting the landscapes. As great as it looks visually, there is a distinct lack of life to it. It feels stale, primarily because there are so few people with which to talk to or otherwise interact with. That’s not to say there is a lack of stuff to do, but that the world is so large yet so devoid of things that inhabit the world that I feel as if I am walking through a theatre production of the world of Random rather than the world itself.

This is also because navigating the environment as Even is often tiresome. She moves at a pace that I could kindly describe as slow and trying to jump or grasp a ladder is finicky at times. This makes completing environmental puzzles grating, as the controls are not as responsive as I would have liked. Coupled with the feeling of emptiness in the environments themselves, it’s safe to say that movement is not Lost in Random’s strong suit.

What is, however, is the dialogue and characters. Talking to the residents of Random, be it the people of Onecroft or the two-faced inhabitants of Two-Town, is a delight due to the combination of creepiness and humour that works its way into nearly every conversation. A pair of twins reveals that they share everything with each other — including their romantic partners.

“Similarly, the combat is what I found most interesting about Lost in Random.”

One quest requires you to collect screaming slime creatures that serve no purpose other than to sit and scream, to the dismay of the nearby townsfolk, only to find out that the slimes can actually be used to destroy personalities once they are blended up. The dark aspects of the game are kept beneath a veneer of whimsy that may well prove to be grating in time, but in my three hours with the game, they were just enough to keep me invested.

Similarly, the combat is what I found most interesting about Lost in Random. Even herself is just a young girl armed with a slingshot, which she can use to knock crystals off enemies in order to gain the energy needed to roll Dicey. Once you are able, you can throw the little die to earn points that can be spent on powerful cards that you draw from a deck. As time is stopped after you roll Dicey, you can take your time deciding which cards to activate before shifting back into real time by hitting enemies with the powerful new abilities you’ve just acquired.

Some abilities provide weapons, such as a bow you can charge up shots with or a sword for some hack n’ slash action. Others create traps, like bombs that can be shot for great effect or giant 20-sided dice that bounce around the arena. Or it can simply be a healing potion or a card that lowers the cost of other cards in a given hand. Once you end the time stop, your hand goes back into your deck and the process repeats itself.

This system is fun to play with, even if the cards I had access to were straightforward in design. The mixture of real time combat and freezing time to make strategic decisions that are dependent upon a die roll sounds complicated, but in practice it’s easy to grasp and dive into. Though I was still in the early goings, the ability to craft and build your own deck of cards is exciting, provided that the card design allows for some truly wicked effects later in the game. There’s even a card shop where you can purchase new cards, and I hope that late game decks can be more than just simple ‘smack the enemy till they are dead’ combinations.

And that’s really the catch with Lost in Random—whether it can still feel fresh outside its opening hours. As I ended my demo, I wondered how future levels and environments would feel, and whether the aesthetic would grow to be tiresome in time. I wondered just how deep the combat and deck building was, and whether it would develop to be as creative and engaging as it potentially could be. In a sense, it has an equal chance of being either a disappointing one-note experience or a unique action-adventure that makes great use of its visual design and one of a kind battle system.

But these opening hours are enough to keep me invested in what happens next. Lost in Random may well be a disappointment, but the fact remains that few games of this caliber are as experimental or as interesting as this.

File Under: Lost in Random, Zoink