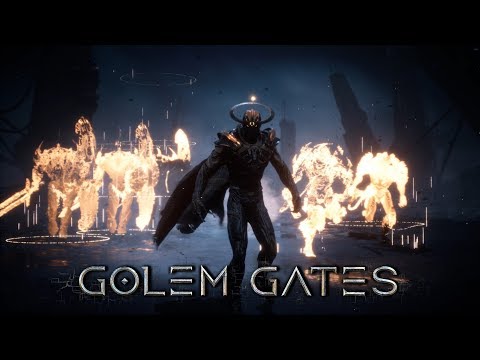 The Harbinger’s quest for redemption continues with the release of Book II, the second part of Golem Gates’ three-part single-player story campaign. Under the guidance of The Archive, The Harbinger journeys deeper into his forsaken world in search of an artifact that could put a stop to the corrupting force known as the Unbound. Wielding the power to manipulate and command nanites pulled from the atmosphere — known as The Ash — The Harbinger and his legion of constructed golem advance to destroy the monolithic Golem Gates across five story missions. But a powerful new enemy awaits him: Tetra. Build and conquer to restore life to the world.

“Since we launched on Steam, fans have asked for more story content, so we’re excited to once again oblige,” said Josh Nizzi, Head of Hollow Earth Inc. “In Book II, The Harbinger is faced with numerous obstacles, one being a new enemy called Tetra. Players will have to prepare their best Glyphs before they confront this unique threat!”

“Golem Gates launches in March, but we’re closing out February with a bang by releasing the biggest update to date,” said Matt Oelfke, Founder and Lead Developer at Laser Guided Games. “Not only will players dive deeper into the mysterious and captivating story of Golem Gates, but fans of competitive multiplayer and score-based challenges are in for a treat as well.”

Golem Gates is a hybrid strategy game where players collect cards (called Glyphs) and strategically weave them into a deck to prepare for battle. Battles are fast-paced and highly tactical with streamlined resource management to keep the focus on the unrelenting action. Through Steam Early Access players can take their glyph decks online in various competitive and cooperative multiplayer modes, and experience Golem Gate’s epic story in an episodic format.

In addition to continuing the story campaign, the Book II content update adds ten new single-player Trials of remixed missions and maps with unique challenges — including a frantic race to evade and destroy enemy artillery stations, and the capture of an indestructible golem. A new multiplayer Versus map featuring balconies and pathways perfect for flanking enemy units, and a co-op desert Survival map that challenges players to multitask numerous defensive positions, are both parts of the update as well. Players can additionally unlock new Glyphs — the summonable Duelist unit type and two Tech Glyphs — and incorporate them into their decks.

Golem Gates is a collaborative project developed by Laser Guided Games and Hollow Earth Inc. Laser Guided Games is made up of veterans from Epic Games who have worked on blockbuster game franchises such as Gears of War and Unreal Tournament. The Hollow Earth team specializes in art design and story development with past experience working on blockbuster Marvel films Spider-Man: Homecoming, the upcoming Avengers: Infinity War and the recently released Black Panther, in addition to the Transformers movie franchise.

Golem Gates is available for purchase now via Steam Early Access for Windows PC at a launch price of $29.99 at http://store.steampowered.com/app/575970/Golem_Gates. The complete game emerges from Early Access on March 28, 2018.