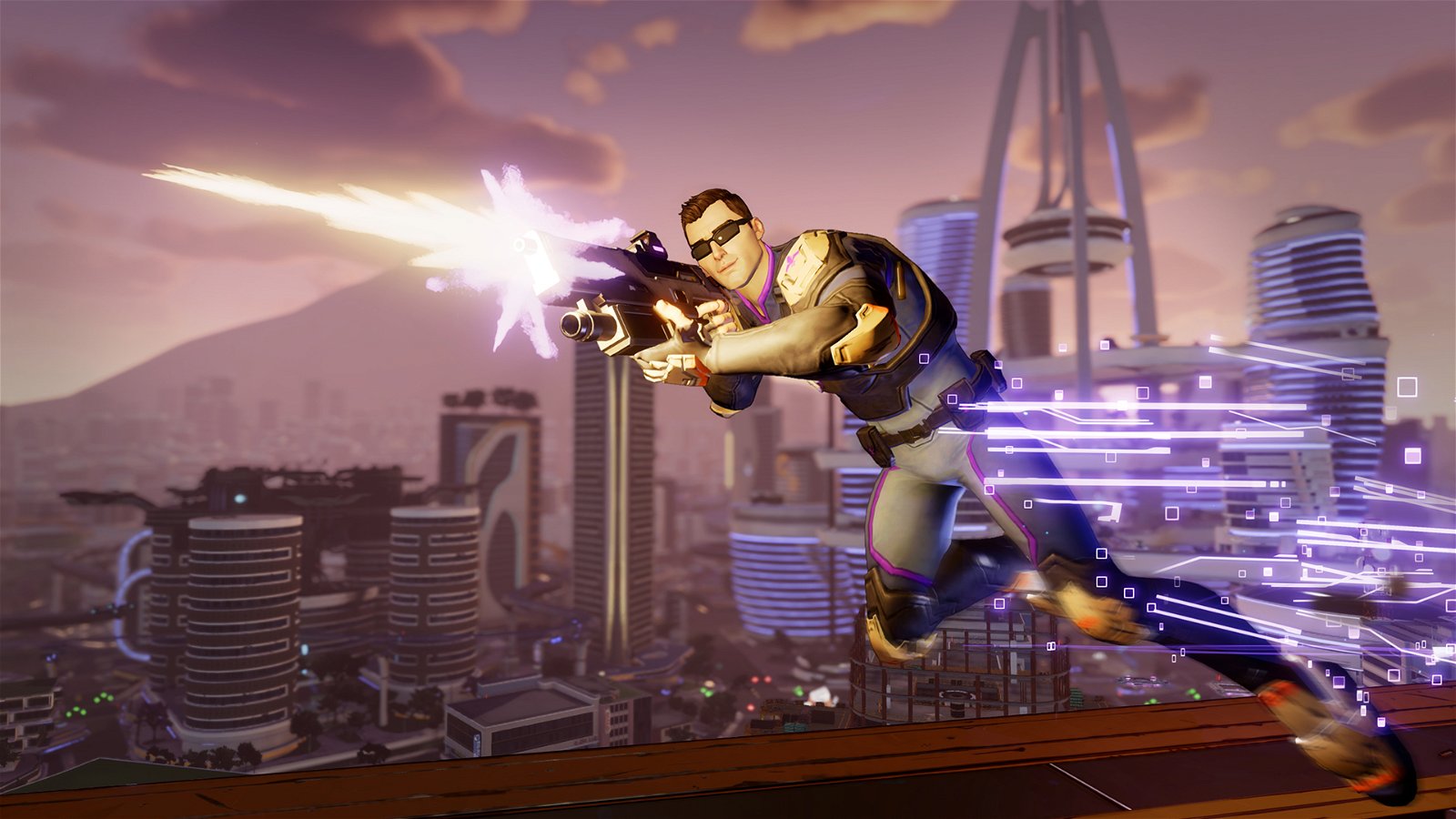 Agents of Mayhem is not as exciting as its title would have you believe. In a series where the last retail release sent the player to Hell to fight the Biblical Satan, Mayhem is relatively subdued. It still has more personality than your average open-world game, but it feels more like a direct-to-DVD Saints Row game than anything else. The traversal from Saints Row IV has been scaled back, the missions generally lack panache, and the game’s version of Seoul feels lifeless and impersonal. Every memorable or exciting moment in the game is tempered by something equally frustrating or dull. You’re probably better off renting Agents of Mayhem from a Redbox or something.

If you’re a Saints Row fan looking to catch up with the old gang, you will be disappointed. Agents of Mayhem follows on from one of Gat Out of Hell’s many endings, where the planet has been rebooted following its destruction in Saints Row IV. The game is disappointingly light on story, but here’s the basic setup: Volition just ripped off G.I. Joe. Substitute “Cobra” for “L.E.G.I.O.N.” and “G.I. Joe” for “M.A.Y.H.E.M.” and you can almost certainly predict all the beats this self-aware comedy game will hit. It’s evil and cartoonish terrorists versus equally cartoonish multicultural heroes, with the fate of all humanity hanging in the balance.

I’m a few hours divorced from having finished the game’s main story, and I can already feel the details slipping away. It’s not that the game doesn’t have style, it’s that it lacks anything distinct. The one memorable part of Agents of Mayhem’s campaign is a sequence involving a virtual Hatsune Miku-esque K-pop starlet, but she felt like a somewhat topical South Park joke more than anything else. I’m using that comparison as a pejorative here; it feels like a cynical play to the internet’s adoration of Korean pop music and/or Vocaloid singers rather than a fluid incorporation of Korean culture.

In all of Agents of Mayhem, there’s nothing as memorable as the poop trucks from Saints Row 2, the Kanye-backed penthouse assault in Saints Row The Third, or the They Live pastiche from Saints Row IV. Although that’s because the writing feels more subdued than the game’s two immediate predecessors, I suspect most of the blame can be laid at the feet of the game’s endless cut-and-paste underground lairs. I cannot stress this enough: a very good portion of this chaotic open-world action game actually takes place in literally identical gunmetal grey corridors and arenas.

Maybe those lairs would be less irritating if the game was more fun to play. Agents of Mayhem’s fatal flaw is the way it communicates information to the player; there’s a constant incongruity between what the game tells the player and what is actually possible. Take the cars, for example. You can hit up on the D-pad and call your secret agent car from perpetually just around the corner. If you stand in a marked circle, the car will drive right to your position and you’ll jump in the car Brock Samson-style. While the car is driving to your position, it’ll plow through everything else on the road, sending civilian vehicles flying off into space—and then you get into the car, where you’ll have trouble with lamp posts & bushes. That first animation tells the player that your car will be able to handle everything, but it’s completely at odds with the reality of the situation.

Enemies can also inflict “slow” on the player, which almost completely restricts your character’s movement. There’s a quick “SLOW!” prompt, and an icon hidden off to the side, but it’s very hard to notice these UI elements during the game’s many, many, many, visually busy combat scenarios. The game does compensate for this by projecting a field around the player’s feet…but you can’t see your feet in combat, which makes the effect doubly frustrating.

Most of my problems with Agents of Mayhem come from the same place: communication. I wish the game was better at imparting damage without stun-locking the player; the waypoints either show where the player is supposed to go or where the next waypoint is, which is mildly irritating while navigating the open-world because you can’t immediately tell if this is where you’re supposed to stop. Even when using a character who can pierce armour, the other armour-piercing character in your team will keep hollering at you to switch to them even though you’re doing just fine. It’s never really clear when it would be acceptable for the player to activate their Agents’ special ability because sometimes you can activate it while in the air but other times you can’t. Without consistent visual or mechanical language, the moment-to-moment gameplay can feel like guesswork.

When the game deigns to let you play outside, the seams in the combat aren’t quite as visible, thanks to the game’s snappy movement system. Zipping between open-world side activities like races or hostage rescues, collectibles, and enemy patrols never stopped being fun and intuitive. Although I will miss the absolute freedom afforded by Saints Row IV’s game-breaking movement system, Agents of Mayhem’s movement still feels great. I would recommend recruiting Kingpin as soon as possible, his jump and dash feel like they cover the most ground.

You don’t really need to recruit anyone else, aside from a character who can deal with shielded enemies—I only ever used about four different Agents once I was out of the tutorial, even though I recruited the full set. Also, every recruitment mission involves those damn underground lairs, so if you avoid those missions you’ll spend a little less time in those copy/pasted maps. That’s not to say any of these characters are bad. If you just want to run out in the open world and cause some chaos, you’ll have plenty of fun no matter who you pick. There’s a tremendous amount of diversity in the player characters, both in a demographic and mechanical sense, and that’s great to see. I just wish some of the more unique characters felt more essential; I don’t think I got a single game over in my time with Agents of Mayhem, even though I rarely deviated from my standard loadout of Kingpin/Hollywood/Joule.

In fairness, Agents of Mayhem does have a couple quality of life additions I really appreciate. You can pause cutscenes by hitting the start button, rather than skipping them entirely. There’s no fall damage, so you can take a few more risks while scouring the open world for collectibles. The game will automatically change its recommended difficulty based on how well the player is doing, which creates a nice challenge ramp as the campaign goes on and the player becomes more familiar with the mechanics. The ultimate abilities are plenty fun, each with their own use case and flashy animation. Mayhem also looks pretty nice, but it’s hard to screw up big-budget cel shading on current-gen hardware.

Sadly, the game is also broken to a degree you wouldn’t expect from such a relatively uncomplicated open-world shooter. There were times where I was jamming on the ultimate ability button, only to have my character just stand there and get shot instead. This happened to a hacker character of mine, and it turns out I needed that hacker character alive to progress through the mission. Swapping to Hollywood would often cause his gun to not materialize, keeping him from shooting back at enemies. Once, my car got sucked into a wall (for a legitimate reason) only to have my character become stuck in the world underneath a bunch of T-posing enemies (for an illegitimate reason). In one of those underground lairs, I had to kill an enemy and get his keycard— once he died he then fell through the world, taking his keycard with him and forcing me to restart the mission.

Once, as I was running across the city to another objective, one of the optional doomsday weapons activated, raining down hellfire upon my character. Instead of dodging the ballistics, the game took control of my character, causing them to sprint into a wall. The game wouldn’t take any instruction from my controller, and my Agent died in seconds. This wasn’t an isolated incident—Agents of Mayhem has a legitimate problem with input. Over my 12-odd hours with the game, I lost count of all the times I had to mash on the controller to fire my gun or trigger an airdash. It wasn’t a case of being stun-locked or animation priority, the game just would not accept my input.

I know I sound pretty down on Agents of Mayhem, but it didn’t make me angry, I just don’t like most of what it does. In some ways, that kind of apathy is even more damning than any rage I could muster. When the credits rolled, I just shrugged and thought about what I wanted to play next. I don’t know that I’ll remember Agents of Mayhem in a month. For something this forgettable (and ultimately disappointing, considering the studio’s past work), you’re better off just borrowing a copy from somebody else.

You would expect the team behind Saints Row to make something with more verve and fewer grey hallways, but here we are with Agents of Mayhem. 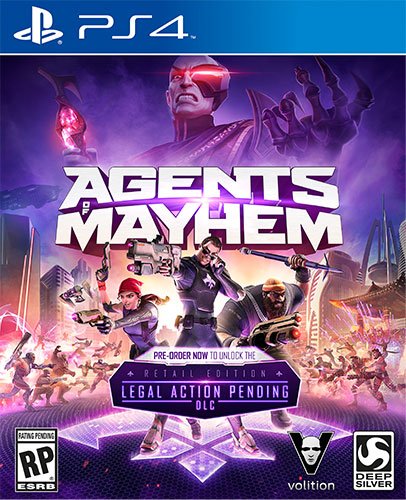