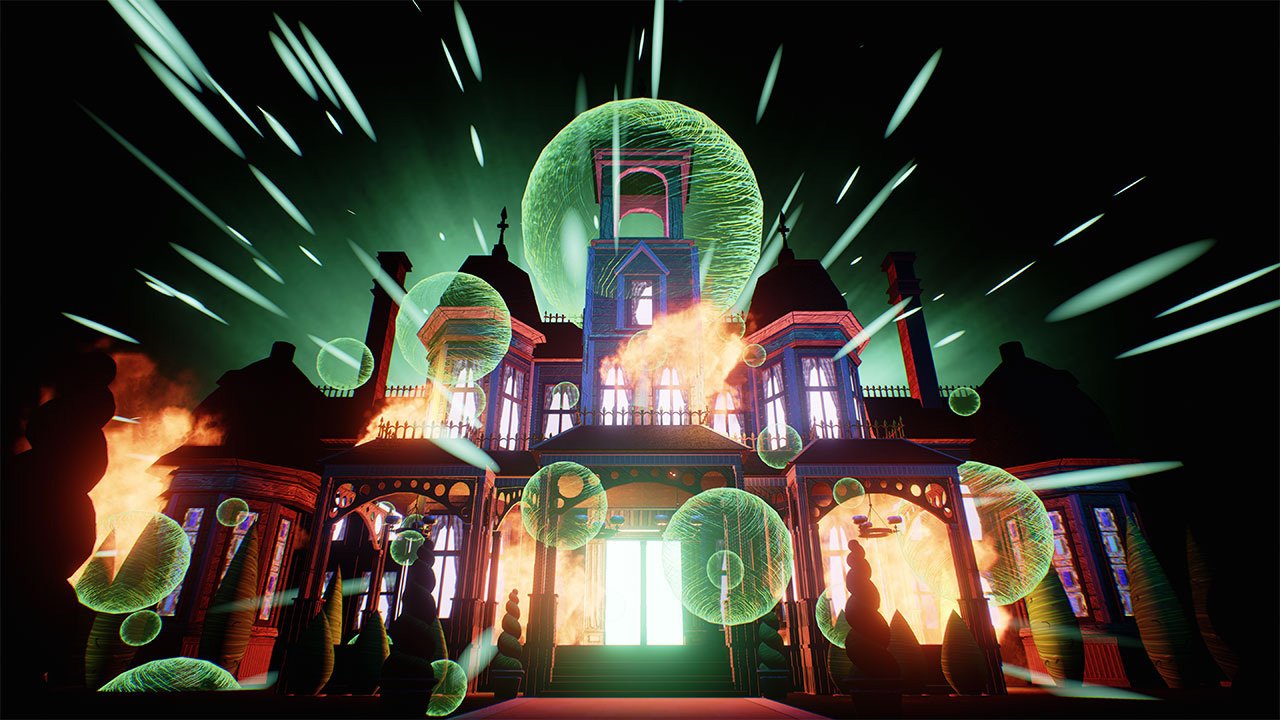 Albino Lullaby is different from other horror games. Most obviously, it’s marketed as avoiding cheap gore and jump scares—but the difference is deeper than that.

In most horror media, something terribly wrong has breached our everyday lives; a killer is in our home, zombies walk the streets, etc. But in Albino Lullaby, we are the strange invader. In this carnival of madness, monsters shriek at our approach, wailing, “Why doesn’t it dance for Grandma?” and “Why doesn’t it resonate with joy?” We are what does not belong, what does not make sense.

Ape Law has created a bizarre world that operates on its own internal logic, leaving the player confused and disturbed. Hideous, slimy pillows with teeth, the Grandchildren, appear to run some kind of processing facility that mutates captives into more Grandchildren. Their only purpose, it seems, is to embody inexplicable “good behaviour” and to revere their deific Grandmother. We learn plenty in Episode 1, but there are still many mysteries to uncover (why there are stacks upon stacks of narwhal tusks at the bottom of a canyon?).

It’s unclear, however, how many players will actually be scared by this nightmare world. Albino Lullaby is willing to continually undercut its own horror, a gamble that doesn’t really pay off.

There’s plenty of comedy in the game, but it’s neither laugh-out-loud funny nor the kind of demented, sadistic humour that chills people. With a few exceptions, like one should-I-laugh-or-scream moment right at the end, jokes in Albino Lullaby are worth a smirk, but nothing more. By the time goofy pitfall traps get introduced, you’ll be more amused by the Grandchildren than spooked.

And then, soon after, you’ll be more annoyed by the Grandchildren than amused. Albino Lullaby begins as a weaponless stealth game like Amnesia: The Dark Descent, which works well enough; however, you’re quickly provided with multiple tools to repel enemies, changing the gameplay from sneaking around to running and trying not to get cornered. You’re also provided with effectively limitless ammunition for your tools, taking away any of that Resident Evil-style fear of running out of supplies. The puzzles are so few and so simple that they don’t bear mentioning. Ape Law clearly doesn’t want you to feel bored or frustrated, but the end result feels shallow.

Home is where the heart is

What is worth experiencing, though, is the level design. The Victorian town is a façade, barely masking an industrial complex spread throughout an eerie cave network. Walls and floors open up and shift, similar to Portal 2, but do so in ever more unexpected ways. An early moment has you painstakingly deactivate the locks on a gate, only to be presented with a sign telling you to “MOVE” seconds before the opening mechanism crushes you where you stand. Later on, you’ll return to old areas with new tools and new perspectives. That elevator you were in? Turns out you were never moving; the other rooms were actually on a spinning drum. The inventive scenery is really what builds the tone that ties the gameplay and narrative together.

The next episodes of Albino Lullaby need to keep breaking the physical boundaries of this strange environment while forging a more consistent identity. Many players will stick around for the oddities and the mystery, yet so much more could be done to have us shivering, chuckling and sweating. Ape Law is on to something here, but it has a way to go before we resonate with joy.

It’s unclear, however, how many players will actually be scared by this nightmare world. Albino Lullaby is willing to continually undercut its own horror, a gamble that doesn’t really pay off.