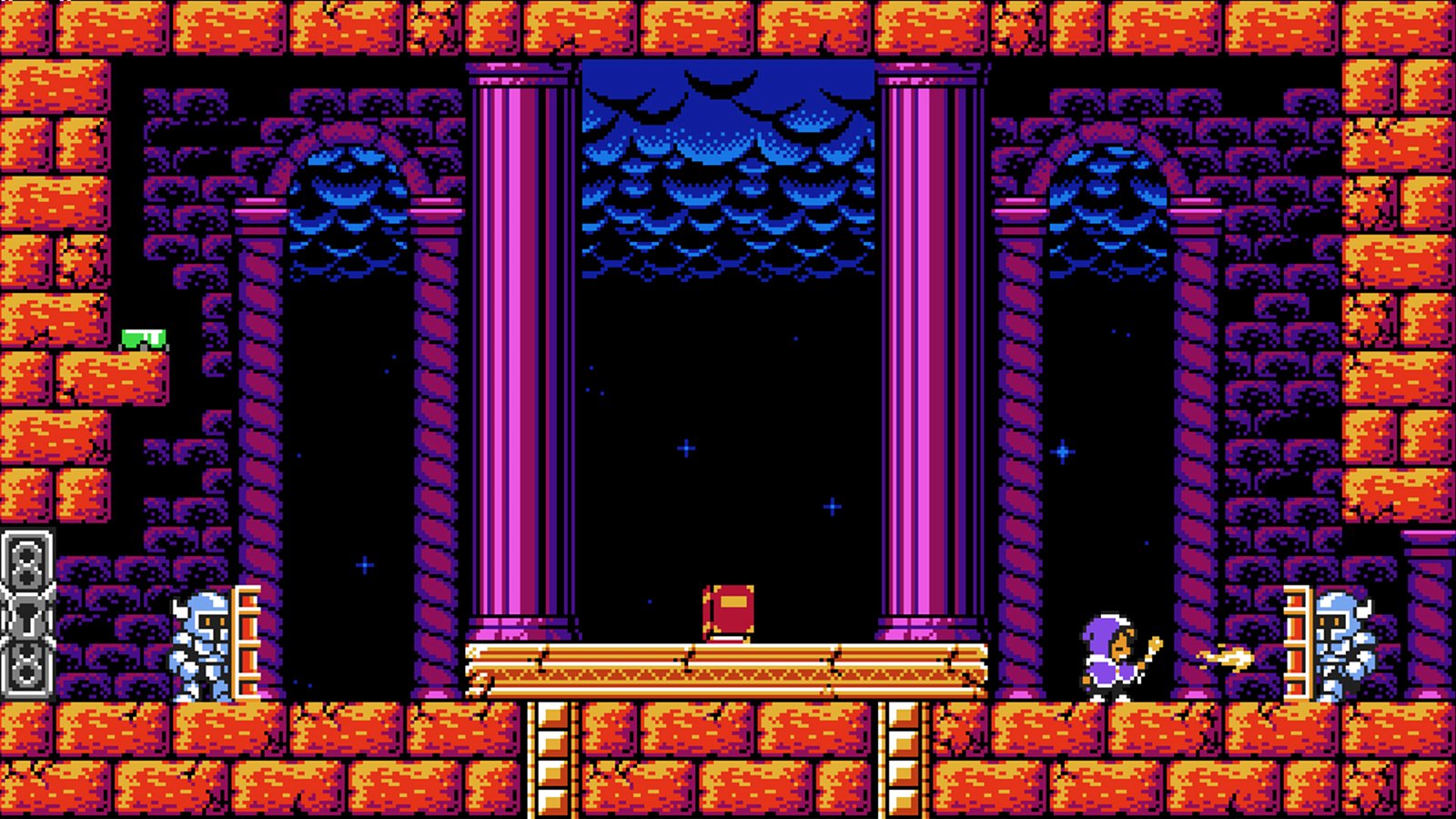 Alwa’s Awakening is a charming NES-style adventure, one that will relax players for many hours with its platforming magic powers and pretty pixelated countryside. At least, until its difficulty ramps up, tossing the player into spike-lined halls, relentless boss battles, and platforming areas that require pixel-perfect jumps. It’s entertaining for those looking for a challenge, but a few flaws make it a lot less fun than it ought to be.

Alwa’s Awakening features the player character Zoe as she awakens in the world of Alwa, its people needing her help in retrieving magic ornaments that will let her banish the evil Vicar and his jerk buddies. It’s just enough of a reason to head out and start smacking passers-by with your magic cane, exploring the interwoven hills and halls of the game’s lands.

They’re nice places to explore. The various locations of the game’s 400 screens all have pleasant details to them, offering some nice pixel work in the backgrounds. Each of the areas in Alwa’s Awakening stand out well, making it easy to know what part of the world you’re in as you roam around looking for power-ups and magical doodads.

There’s tons of stuff to find and collect. On top of new platforming abilities, players can find 99 collectable orbs spread across the world. If players collect a certain amount, they will get a free hit on every boss in the game, rewarding players with easier boss fights should they do some exploration. These items are hidden all over the place as well, getting players to poke around every possible route for extra boss damage.

The enemies players encounter also feature some fun designs. They all have a playful look to them, favouring a childish nature even when facing armed skeletons or colossal knights. It feels in keeping with the NES’ pixel visuals, evoking a time when even the monsters that killed players all looked a little silly. However, many of the same enemies show up over and over, and while they feature smooth animations and sharp details, they do get a little tired by the end.

Repetitive monsters do have some plus sides. Players will know how to deal with them well after running into them so many times, and Alwa’s Awakening does introduce at least an enemy or two in each area, so it helps players learn their behaviours by the end. That being said, few enemies require the player do more than rush them and hit them, stun-locking them no matter how many hits they take.

To counter how easy they are, players can only take three hits, and Alwa’s Awakening offers little post-hit invincibility time. A single enemy with ranged weapons can easily hit the player two to three times in moments, taking them from full health to death from a single screw-up. It technically balances the challenge out, but it makes many deaths feel a little cheap.

Bosses can make this a worse problem. The bosses in Alwa’s Awakening are quick and have huge damage spreads with their attacks, shredding careless players. They’re also highly entertaining, as they will push the player to use all of their skills and abilities in creative ways to get past them. It feels really good to put these beasts down as they require timing and smart spell choice to beat (more on magic in a bit), making for some memorable battles.

Most often, Alwa’s Awakening challenges players with platforming segments. Players will have to get Zoe through many lethal platforming areas using magical spells that she collects throughout the game. She can create a bubble that she can ride on as it floats straight up, and a stone that gives her a little boost, blocks projectiles and can float across water. With just these two mechanics, the developers have created many devious areas that can only be traversed with careful use of these powers.

Players looking for NES-era challenge will find it with these deadly arrays of pitfalls. In the beginning, these start out simple, teaching the player how to use these abilities in tandem. They stay simple for some time, honestly, giving the impression the game won’t be all that hard. Then, several hours in, these areas start to get significantly harder. It’s jarring and will catch many players off-guard before they adapt to the new challenge.

After that, it gets even harder, requiring pixel-perfect timing to complete the gauntlets of jumps. It’s relentlessly challenging, and while the game is normally generous with save points, these all but dry up at the end, making for exhausting slogs through several areas where players can’t make the slightest mistake.

Being challenging is fine, but these sections are made a bit more difficult because the spell casting is unwieldily. Rather than map each spell to a button, players have to toggle through the three of them (there is a damaging lightning spell thrown into the mix). This can be irritating when casting while leaping and is made even worse because players have to hit up and attack to cast a spell.

Hitting up and attack while trying to control a jump through narrow, lethal spikes or pitfalls, while toggling through spells, is needlessly difficult. Also, given how much players have to fiddle with the control stick/d-pad, it means the right spell might not cast, adding a random chance of failure to already-difficult platforming sections, or they may be messing with the spell instead of guiding their landing. Spells also draw from a magic meter, so players also have to make sure that hasn’t drained on top of it all. It’s an awkward control scheme that drains the fun out of Alwa’s Awakening‘s challenge.

Alwa’s Awakening takes its players to a pretty, magical land filled with unassuming creatures, delightful environments, cunning bosses, and precise platforming segments. It would be a great game were it not for its clumsy spell system, which makes the game’s harder moments needlessly, and unfairly, difficult.