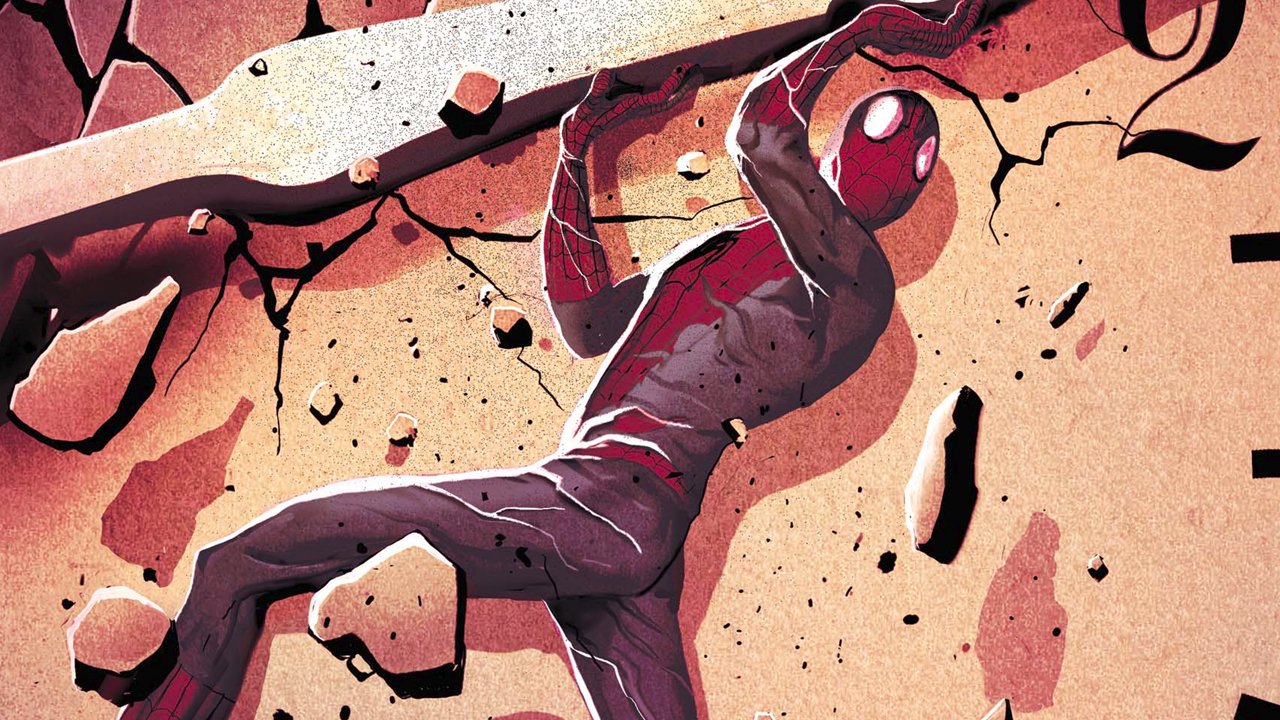 This issue is just as fast-paced as the preceding issue, as Spider-Man frantically tries to figure out how to stop a future he saw from occurring, with only hours left on the clock.  Last issue was fast-paced, but somehow this issue is even moreso, as Dan Slott puts Spider-Man through the ringer as he tries to figure out how to solve the problem at hand.  It’s a nifty time-travel story, which can at times be a difficult proposition, with some fun gags thrown in for good measure.  With this title nearing its next big epic, Ends of the Earth, it’s nice to have a story seemingly unrelated to it, and which focuses on the Horizon Labs aspect of Peter’s life.  Dan Slott has really pulled out all the stops to make Horizon Labs stick, and I for one appreciate the attempt to really flesh out that area of his life, to make it a more substantial aspect of his supporting cast and continuity.  One of the drawbacks and flaws during JMS’ run on Amazing Spider-Man was that although making Peter a teacher was an interesting concept, there was never a set cast of characters that inhabited that world, to help ground Peter’s place in it.  The Daily Bugle is hard to let go of for writers because it represents a large part of Peter’s core supporting cast, so I like how Slott continues to make Horizon Labs an important part of Peter’s supporting cast, increasing the likelihood of Horizon Labs’ longevity in the Spider-Man books.

There’s a ton of stuff packed into this one particular issue, including Silver Sable and the menace of some ULTIMATUM agents, plus an enjoyable interaction between Peter Parker and Mary Jane.  There have been relatively few interactions between Peter and MJ ever since Brand New Day started, with more occurring recently, and I like how Slott is handling their interactions.  The emotion and feelings that arise on the page are quite genuine, and makes their interactions genuine as well.

Humberto Ramos is the best pick of current artists on this book to have illustrated this story, because his artwork has a certain frantic, manic energy to it, which fits in perfectly with the fast-paced nature of the script.  Ramos’ style fits perfectly here, and it’s very enjoyable to read as a result. Last issue is a tough act to follow, but thankfully this issue manages to not only match it, but also exceed it in certain areas.  Time-travel can be difficult to write well, but you wouldn’t know it from Slott’s handling of it in this issue.  This two-issue arc may be among my favourite Slott-written issues of Amazing Spider-Man, deceptively simple-looking, but quite complex and engaging.  HIGHLY RECOMMENDED!

Time-travel can be difficult to write well, but you wouldn’t know it from Slott’s handling of it in this issue.