Antrum: The Deadliest Film Ever Made (2018) Review There are countless tales of cursed films; movies that are so bad, they will cause the viewer to die after watching.

From The Ring to Cigarette Burns there have been many works of fiction that try and capitalize on this concept, and now there is Antrum: The Deadliest Film Ever Made. Taking this concept and running with it, Antrum is a unique throwback that will put you on edge in the best possible way.

Broken up into a documentary segment and the actual “film” itself, Antrum: The Deadliest Film Ever Made manages to strike a balance that gives the viewer a setup gimmick to keep in the back of their mind as they watch the film proper. It at times feels like two films, both working to craft a sense of dread—and oddly enough, this approach works.

On first viewing, the mockumentary segment feels genuine. The talking heads feel very akin to documentaries seen on the BBC in the ’80s and ’90s, lending enough authenticity to the proceedings to make you question if what you are seeing is fake or not. Through the stories about the horrific nature of the screenings and discussions about what the people who sat through a screening of the film endured, co-directors Michael Laicini and David Amito manage to build a believable narrative, making events seem just shy of being part of this word to make a viewer question their reality. Much like The Blair Witch Project, Antrum knows just how much to show and what to hold back, making for a compelling film that draws you in.

It is only after the stage is set that the actual “film within the film”, starts to play. Once the second layer of the film starts up we are greeted by our protagonists, two siblings on a quest to save the soul of their recently passed dog. As the older sister claims to take her young brother to the place Lucifer fell to earth, they get to work digging a hole to hell. As time passes, and things start to get a bit stranger, the movie picks up and we get a better sense of the madness these two siblings have found themselves in. Is it Hell, or is it just a strange environment with odd events taking place? The movie never gives enough answers to make that judgment call.

Antrum plays with the 70s concept throughout the runtime, from the credits to the look of the movie. This is a film that works hard to make you a believer of its premise. Laicini and Amito have built a movie that feels of the time, even though in reality it was all done in 2018. Antrum feels very similar to many European art films of the period, taking time to get going, slowly building a sense of the siblings, what they are going through, and the reality they find themselves in. Just to keep things interesting, there are many “demonic” symbols spattered throughout the film, flashing on the screen for split seconds to add to the “cursed film” concept spoken about in the documentary segment at the beginning.

While Antrum is the true definition of a “slow burn”, once it gets going, it will keep you glued to the screen. As the film reaches its climax, and the reality these siblings find themselves in becomes more clear, the imagery and concepts at play can be disturbing and heartbreaking. Some of the final moments manage to be haunting, as it is unclear what is taking place or how these two will ever be the same after what they have gone through.

If you were around when The Blair Witch Project first hit cinemas, with people questioning the reality of what they just saw, this is what Antrum hoped to achieve. While it may not fool the masses into believing there are haunted movies, it is an interesting work of horror that is well worth a watch. It is a creepy, disturbing, and effective 70s throwback and for anyone who loves the genre, this is a movie well worth your time.

Antrum is a retro throwback that plays with the genre in fun, creepy, and effective ways to make it a must-watch for any fan of the horror genre. 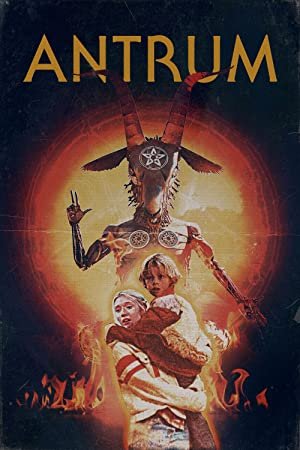