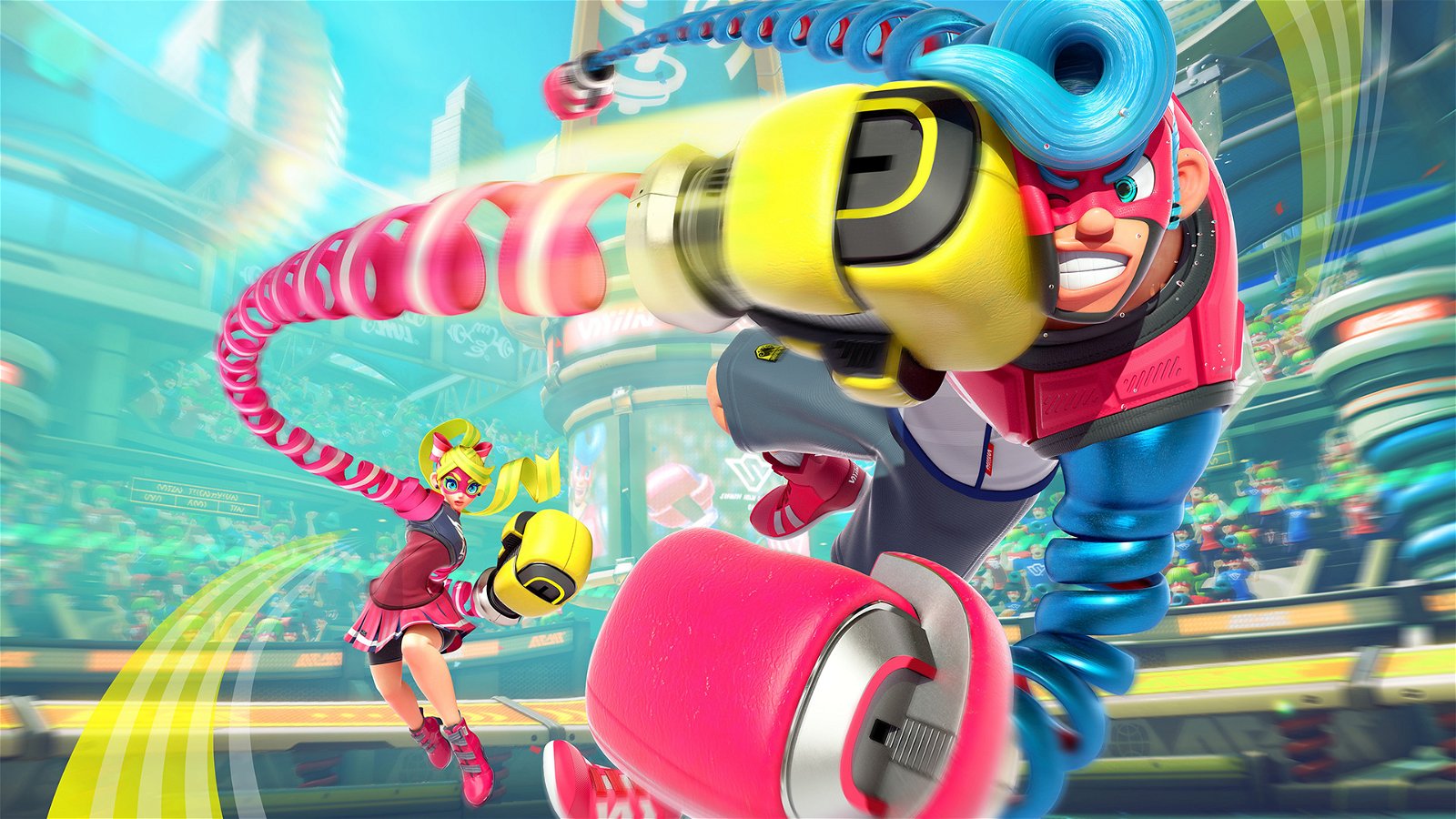 Another Nintendo console, another way to punch people in the face. The big N has been a big fan of face-punching from their humble beginnings. Punch-Out was a classic of split second fisticuffs, pattern memorization, and Mike Tyson erasing that has continued to be a cornerstone of sorts for the company. Oh sure, their boxing games don’t pop up as much as Mario, but their two finest systems (the Super Nintendo and the Wii, don’t question this statement) delivered their two best Punch Outs (Super Punch Out and…er…Punch Out), while even their biggest failure (The Virtual Boy) boasted a fantastic Punch Out clone (Teleroboxer) as arguably it’s only enjoyable title. Now The Switch is here and wouldn’t ya know it, the system has a boxing game. It’s called Arms. It pushes the Punch Out formula into the fighting game arena and while it might not be overflowing with content, it is a hell of a lot of fun.

Much like Splatoon, Arms represents Nintendo attempting to launch a new banner franchise that doesn’t rely on any of their icons from the past. As a matter of fact, it’s got a similarly cartoony fantasy aesthetic as the big N’s splashy shooter. It all hinges on a fantasy fighting league in which competitors have elasticized ribbon arms that stretch across arenas. The world building is impressive, with each battle stage uniquely designed and themed to the fighters right down to screaming fans in costume. The ten fighters available at the start vary from the day-glow generic characterizations of Spring Man and Ribbon Girl to more imaginative creations like Master Mummy (the name says it all), the living slime Helix, and the robot n’ it’s robodog Byte & Bark. The world feels similar to the neon utopia of Splatoon with the humanoid figures deliberately designed with diversity in mind. The design elements have all been calculated with the usual Nintendo combination of adorability, accessibility, and sensory teasing joy. It’s hard not to fall in love with this world within minutes and the whole thing is as delightful as beat em up’ based gameplay can possibly be.

Now, as for the gameplay itself, essentially this is a revamped Punch Out. Punching is the focus, with two stretching limb under your control. However, you can also re-direct punches slightly after they’re thrown since they stretch so far and that adds a new level of strategy. Additionally, characters can be moved 360 degrees around the arenas, with dashing and jumping added in for extra mobility and strategy. Toss in some rapid-fire hypercombo goodness and an immensely satisfying grab-in-smash move and the game is surprisingly diverse in playability as well as character design. Each fighter not only has their own unique style, but a series of different fists with separate powers of their own (some big boppers, others with multiple smaller fists, boomerangs, etc.) which can be changed between rounds and upgraded through unlockables for added gameplay variety. Toss in some immensely amusing arenas with added wrenches like hoverboards, obstacles, and building blocks and it’s amazing just how different each and every fight can feel. Sure, it’s mostly a new twist on the Punch Out formula, but there are so many different variables to every fight that the design never depends on pattern recognition to beat fighters. There are too many ways to win and lose for that.

Now controls. Much like the Wii’s version Punch Out, Arms is being flaunted as a motion controlled fighting game that probably plays best on a controller. Don’t get me wrong, grabbing the joy cons and duking it out for your fighter is fun. However, timing your punches isn’t always the easiest in the heat of battle and…ya know…it can be exhausting after a few rounds. Arms still an immensely fun motion control experience that even just compared to the Wii’s Punch Out shows how much better motion controls have gotten. However, for heated matches against friends or anything above the easiest difficulty settings against the computer, playing Arms with the controller is the best option. It doesn’t feel like you’re losing out on the experience, it just adds new depths and precision to Arms that makes it even more additive n’ satisfying (plus it likely will be the only real way to play once this thing takes off online).

Sadly, I wasn’t able to test Arms’ online battles during the review period, so it’s tough to say how well it will play once Nintendo’s servers are tested. However, I can say that it plays like a dream in single player and local multiplayer. The graphics are gorgeous, some of the best on The Switch to date (which shouldn’t be too much of a surprise given that this is the first major Nintendo release specifically designed for the console). Frame rates never dipped, colors were bold, and animation was flawless on a TV or The Switch itself. There are a few different modes of combat. A Grandprix (which is a usual trip through all the characters and a boss that earns currency to unlock and upgrade arms), the usual single or multiplayer versus matches, and team fights that put four fighters in a single arena. Ontop of that there are some fun alternative match modes (which also pop up in a Grand Prix), 1-on-100 is a timed match to beat 100 drones (nuff said), V-Ball is a volleyball match with a ball the explodes if it hits the ground (which to be honest didn’t quite work as well as it sounds), and Skillshot allows players to compete over destroying the most targets (while also punching eachother from opposite end of the arena. The best is Hoops, a halfcourt basketball mini-game where fighters slamdunk and shoot each other through the basket. It’s almost unreasonably fun, possibly the finest arcade exaggeration of basketball since NBA Jam. With the exception of the frustrating V-Ball, all of the mini-modes are worthy additions to the regular combat that should suck up plenty of Arms players’ time.

After a little time with the game, it’s hard not to consider Arms another big winner for Nintendo. It’s easy to learn, yet difficult to master. There are unlockables to keep players coming back, mini-games so fun they never feel tacked on, and what promises to be a robust online competition. Is it perfect? Well, not exactly. The motion controls aren’t always ideal (although perhaps after a learning curve they will get better), the fighter roster is surprisingly slim (get ready for DLC characters!), the fighters don’t exactly feel balanced, and there isn’t that much content relative to other contemporary 1st party fighting games (no story mode, etc.). However, Arms is a hell of a lot of fun and just as addictive as a fighting game needs to be.

As with all games of this genre, the real test for Arms is how often players go back and this already feels like a title that could consume the imagination and free time of any and all Nintendo nuts out there. Sure, Arms isn’t perfect. However, it is an attempt by Nintendo to do something new (well, new-sh, Punch Out looms large) rather than rest on their laurels. They have delivered a fighting game with a unique style all it’s own that works and is filled with promise. I’ve got a feeling that Arms might become yet another successful franchise for the big N and those aren’t exactly easy to manufacture on demand. Nintendo just has a way of making it look easy. Well played. I can’t wait to see how this takes off once the online battles and tournaments commence. The potential is all here, now let’s see how it plays in practice.

Nintendo delivers a new twist on Punch Out for The Switch and it already feels like the foundation of a new franchise. 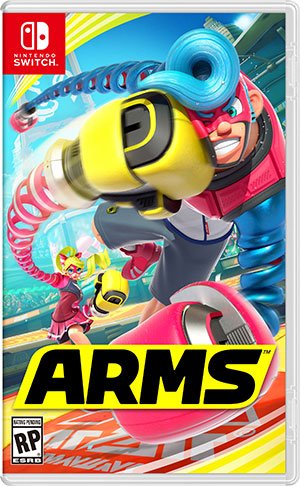