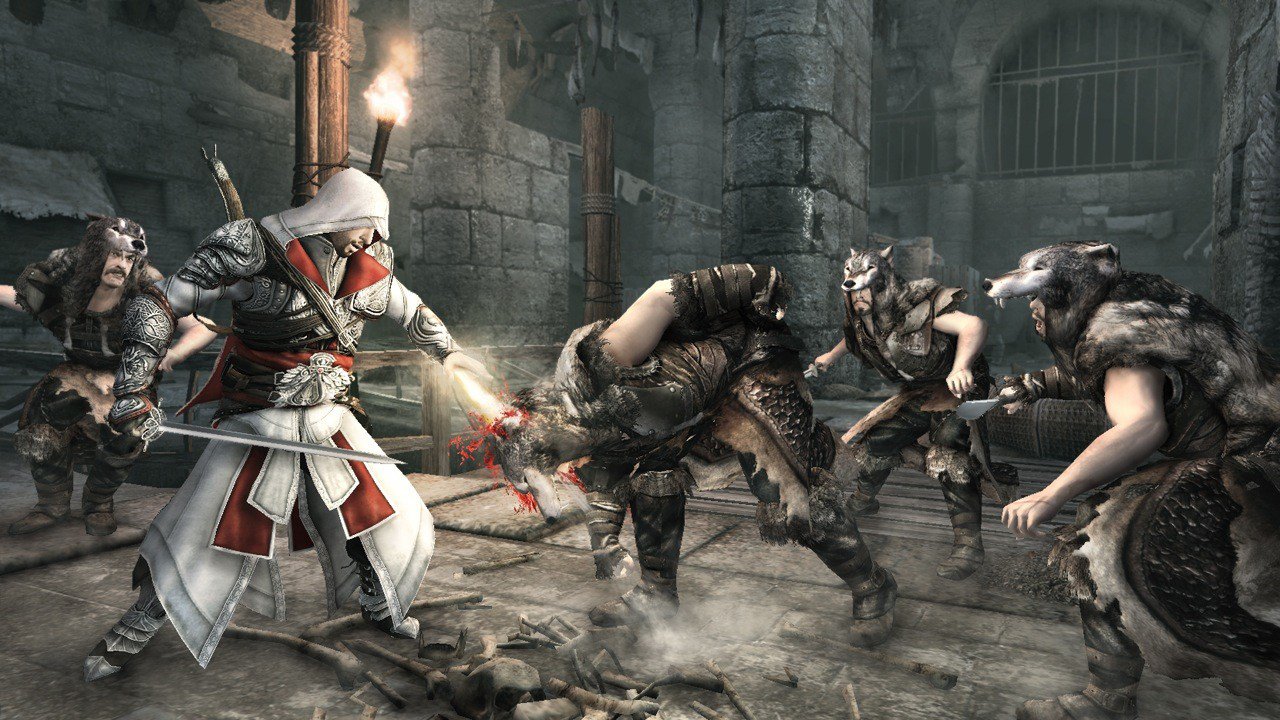 Nothing Is True, Except Maybe Sequels

Ubisoft has a unique opportunity with the Assassin’s Creed franchise, a malleable property that can go almost anywhere. And it’s an opportunity they’re taking advantage of, first by switching characters entirely from one game to the next, and then introducing an “expansion” to 2009’s Assassin’s Creed 2 with Assassin’s Creed: Brotherhood that takes a bold chance with a slower paced, 3rd person platform style game by adding multi-player onto it. The most surprising thing is that Brotherhood succeeds, though not perfectly.

All Roads Lead To Rome

Brotherhood is a straight follow-up to Assassin’s Creed 2, with the story picking up literally moments after the end of the previous game. There’s a quick video recap for players that are completely new to the series, but obviously this spoils the discovery and drama of the first two games. Ezio Auditore is once again the historical hero, while Desmond Miles, in the present day, struggles to uncover the secrets of his ancestors in a conspiracy that involves Templars and other elements that predate humanity itself. As the story gets underway, what was a narrative trembling on the rails in AC2 goes completely off—on fire—by the end of Brotherhood. People looking for shocking cliff-hangers are sure to be satisfied, though people looking for some narrative sense are likely to be underwhelmed. Ezio himself has also lost some of his luster as there’s no dramatic arc that transforms him as there was in the previous game. The Piece of Eden is stolen—again—and the rest of the game is spent recovering it. There’s little room for character development.

In the presentation department, Brotherhood still uses the same engine from AC2, not a surprise considering the game was released just a year after. It still handles large environments beautifully, with detailed characters and animation, but the ambition of creating Renaissance Rome—the venue for the majority of the game—taxes the engine. Screen tearing is a regular occurrence, frame rates are variable, and textures occasionally take time to load in appropriate levels of detail. It’s still a gorgeous looking game, with brilliant art direction, just let down by some minor technical flaws that take off some of the shine. The audio side is nearly identical to the previous game, with music tracks being the new addition while sound effects and voice actors are largely taken from the previous game. Brotherhood isn’t quite the revelation of AC2 in graphics and sound, but the art direction manages to make up for it.

The Brotherhood Wants You

It’s not inaccurate to say that Brotherhood is really Assassin’s Creed 2: Part 2. Basic gameplay remains unchanged, a combination of platforming/traversal and combat that relies on parries and counter-attacks rather than sustained, complex combos. The controls are also identical, which may be a good or bad thing depending on whether you found the semi-automation of previous titles liberating or restrictive. You’ll still take missions, clamber around a city, tailing or assassinating targets, with a wealth of side-missions to “renovate” Rome. One nice improvement is that there is even more variety in the story-based missions, with the addition of “full synchronization” an optional goal in every mission for doing things like taking no damage, not being seen and various other requirements, designed to add finesse to your playstyle. While you can play through the game without doing this, it unlocks cheats for later use, and of course, there are trophies/achievements for going all out. The two major new additions are a fight for faction control, in the form of igniting towers controlled by the Borgias, villainous family of the game, and recruiting new assassin’s to join your ranks. When the Borgias control an area, shops can’t be used, and tunnel system (for warping from one area to another) is also locked out. Killing the commanding officer of an area and then setting the Borgia tower on fire frees the area, allowing you to open shops, tunnels and bring in more income for yourself. It’s entirely unnecessary to do this but if you don’t, you severely limit your options for buying more healing items or repairing your armor.

Recruiting new assassins is also an interesting twist, but again, it’s largely unnecessary. By wandering Rome, Ezio encounters citizens being oppressed by Borgia forces. Helping them automatically recruits them into the Brotherhood where they can be sent on missions around Europe for experience points, money and even special loot items. XP translates into better weapons and armor for them which is helpful if you do use them to assist you in missions. One thing to note is that perma-death is in effect for these recruits, so if you send them on a mission that’s too high level, or simply ignore them while fighting a huge mob, they can and will die, leaving you with an empty slot requiring a new recruit to train up. It’s a fairly comprehensive system, but unfortunately plays little meaningful role the main game. You can complete missions just fine without them—outside of story missions that require their use—they merely make things a little more convenient in the long run.

The big news however, is the much previewed multi-player. There are various modes, the basic being “Wanted” with other modes such as Alliance and Manhunt, but the basic premise is the same. You are assigned a player to kill, and someone else is assigned to kill you. It’s a unique mechanic that works out beautifully for tense, clever games of cat and mouse, that, like poker, involve a mix of luck, skill and psychology. There’s a sense of satisfaction in fooling a human predator into thinking you’re an anonymous NPC, and there’s a classic “thrill of the hunt” sensation when you drop from a roof-top onto an unsuspecting target. Like most multi-player games, there’s a COD-like levelling system with perks, and hopefully this fresh take on multi-player games will be enough to lure some FPS gamers from the safety of their preferred genre.

In the end, Assassin’s Creed: Brotherhood has some tweaks, but is essentially the same game as before. The graphics engine is starting to struggle somewhat, but the gameplay has been tweaked to add a little more variety, and the multi-player aspect actually manages to bring something exciting and new to the table. There may not be enough change here for everyone, but what changes are present make the game feel sufficiently different enough that it’s a safe purchase for fans.

Brotherhood is a straight follow-up to Assassin’s Creed 2, with the story picking up literally moments after the end of the previous game. 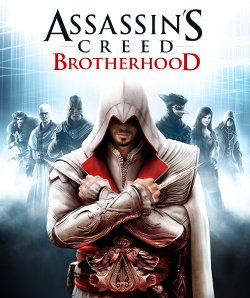