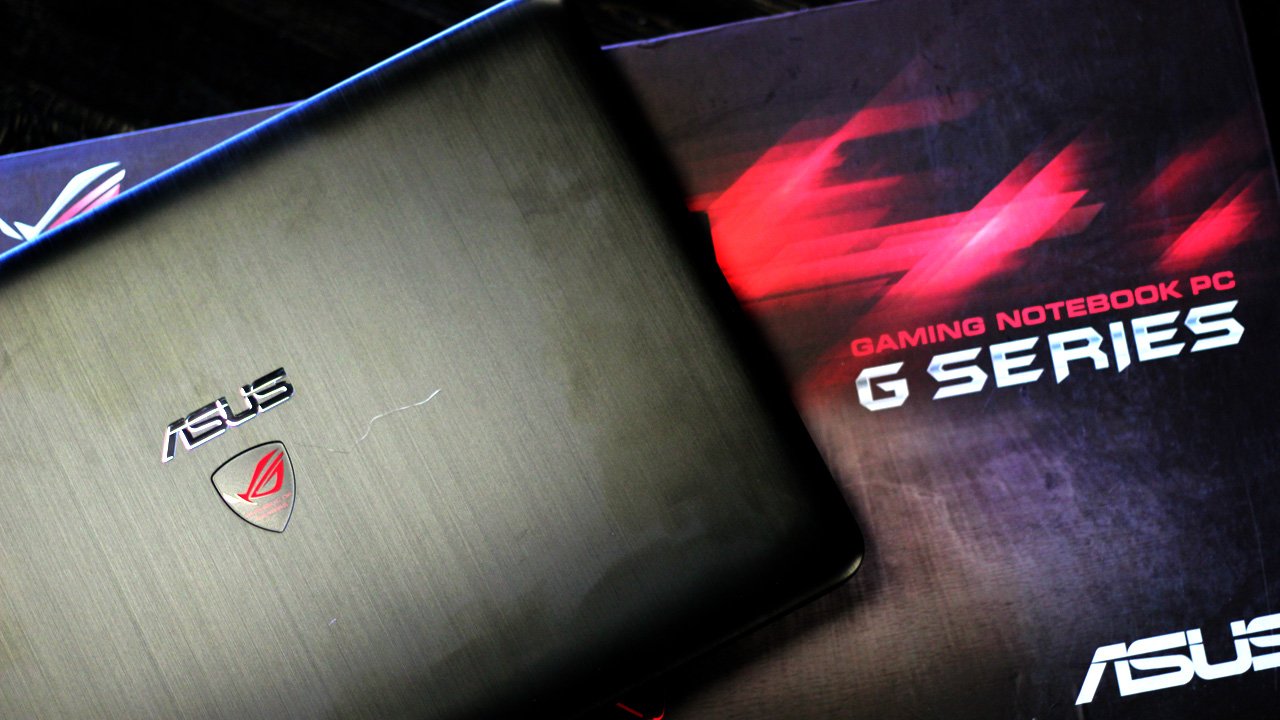 At a glance, the new ASUS G771J should be a pretty formidable addition to the Republic of Gamers roster. You see, it’s packed with not just an i7-4710HQ running at 2.5GHz and 12 gigs of DDR3L at 1600MHz, but it also sports a GeForce 860M with 2GB GDDR5 to flood the 17.3 inch display with deliciously animated pixels. Those sound like some pretty impressive numbers for an ultrabook, and the overall coming together and performance they boast is, in truth, a whopping lump of disappointing mediocrity. The reality is, despite what ASUS may claim with its catchy marketing phrases about being “the laptop for the discerning gamer” or claiming to be a “high-performance gaming laptop with enthusiast-grade graphics”, it struggles to out-perform modern consoles, while also struggling equally hard to manage its rampant heat problems.

Thanks to the slim profile and lightweight design, paired with a new cooling design that’s supposed to keep things whisper quiet when the GPU isn’t being taxed, the G771 is burdened by some seriously high temperatures under load. Even the CPU gets wearily hot when playing games that it should breeze through, though I suspect that’s more to do with the endemic heat issues common in Haswell chips than it is with the cooling itself. If I’m totally honest, if it were my money, or if I were to have it for more than ten days, I wouldn’t be at all comfortable with the heat levels it was reaching. That being said, thanks to it being a unit on test, I could push on to discover that the heat build-up caused occasional stuttering as the GPU started throttling itself to keep cool. I can only fear for what the long-term heat fatigue would do for the hardware, but I know it’s nothing good.

The whole package seems like an exercise in compromise. The battery life is what I would describe as not great, boasting about 3.5 hours of light use, five if you crank the power saver settings and aren’t eating up juice via wifi, and a whopping “not long” if you’re gaming anywhere away from an outlet. I’ve managed to drain it from full in just over an hour, which leads me to believe it’s designed more for the user that will travel with it, but really only use it when plugged in. The problem here is the performance per dollar, thanks to that lacklustre 860m makes tears leak from orifices I didn’t even know I had when compared to a fixed PC or console. As a result, one could only really justify it as something for on-the-go gaming. And then we circle back ‘round to that battery life, leaving me to question where and when the G771 is ever really at home. Those marketing guys talk about great sound and high-quality microphone, but if that’s all you’re after, why not step down to one of ASUS’ many 15 inch models and spend the difference on a really, really nice USB headset? There’s even an optional 3D camera that will let you wave your hands to control what appears to be one Steam game, or even render a 3D model of your face that can then be 3D printed, assuming of course you have access to both a 3D printer and an unlimited well of shameless narcissism.

So what do I think of it as a package then? Well, most of the things I like about it are also things that I hate. For example, I think it’s stunningly beautiful thanks to its matte black brushed finish, but I despise how absolutely any touch leaves impossibly stubborn smudges. I love how the keyboard is backlit in red, like I’ve come to expect for night gaming, but I hate that the key caps don’t flush with the faceplate and bleed so much light from the LEDs inside that they negate their own purpose. I like that the i7 and the RAM offer up some pretty respectable performance, but I hate that the 860M just… doesn’t. I like that the whole package is completely silent when not under load, but I hate that it gets hot enough to throttle the video card when it is. I also quite like that it’s a 17 inch portable gaming machine that weighs in at just 7.5 lbs, but I hate that it doesn’t really do the portable or the gaming things all that well. Most of all, though, I adore that it’s slapped with a Republic of Gamers badge, a symbol for absolute quality and uncompromising performance in the pursuit of gaming, and I’m heartbroken that the package that badge is stuck to is an affront to everything that ROG stands for.

I buy ASUS products. I trust ASUS products. For as long as I can remember, ROG has been a way for those who know to separate themselves from those who don’t. An eye-wateringly expensive option that offers more than anyone could expect, and always with an added extra or two tucked into the box. The G771 is a pretty good ultrabook unto itself, but pretty good is not what ASUS does. Pretty good is definitely not what ROG does. Their brand introduction proudly states that in 2006, “… the Republic of Gamers brand [was] formed for the sole purpose of delivering the most innovative hardcore hardware for truly dedicated gamers.” I am a truly dedicated gamer. We know our shit. The G771 has some great features and does some great things as a media machine, but in the back of my mind, I know that the marketing team, or worse still, the accountants over at ASUS have made the decision to branch out the ROG name into the larger, and subsequently more profitable sectors of mainstream gaming in the hopes that more affordable ROG hardware will be a pull-factor. The tragic reality is they’ve only managed to neuter what made that ROG badge feel truly special.