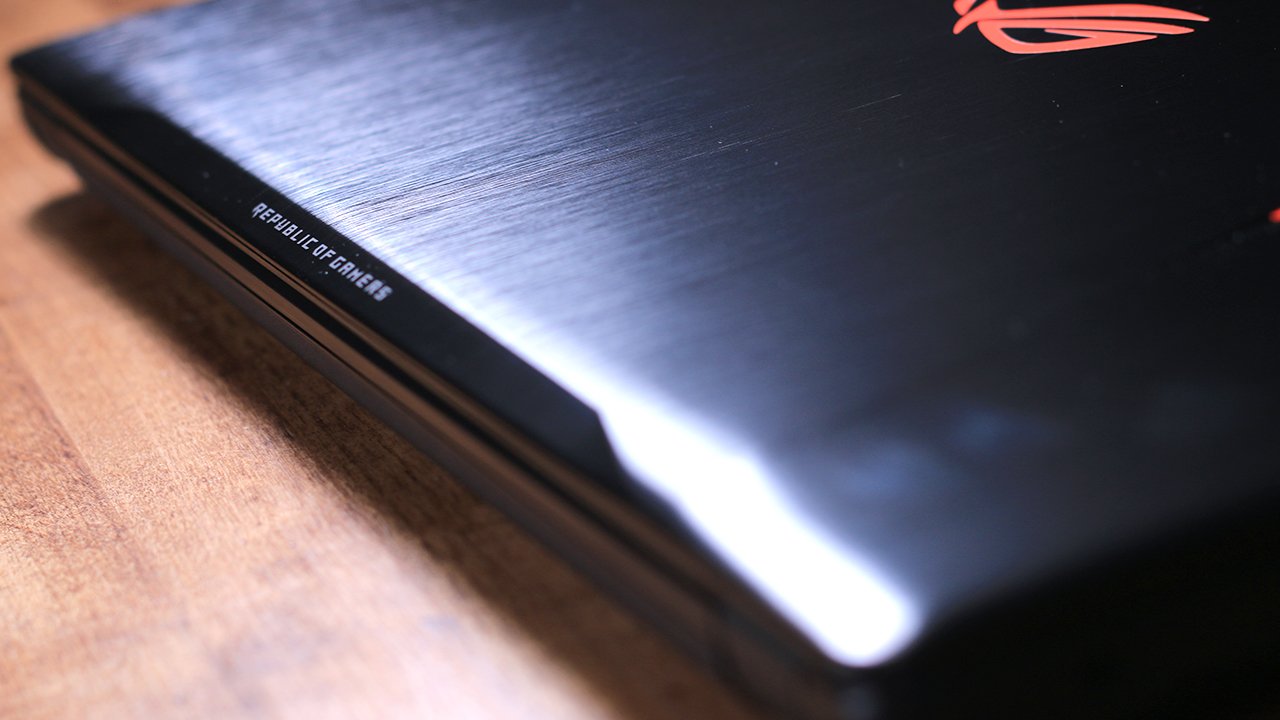 A new year begins and right alongside it comes an abundance of budget oriented gaming notebooks. These GTX 1050 Ti machines may be one of the worst kept secrets of NVIDIA’s in recent memory, but consumers are still excited for their arrival. The Asus STRIX  GL753 Gaming Notebook is a textbook example of what consumers can expect from a majority of the leading tech manufacturers with this generation of budget oriented hardware, albeit with a higher retail price of $1299.99 USD.

While most tech manufacturers like to frequently change their notebook chassis to make each one stand out as unique, Asus takes the Apple approach to their hardware and maintains a consistent appearance across multiple generations. Similar to the previously reviewed GL702M, machines intended for the “Republic Of Gamers” commonly feature a brushed aluminium finish across the back of the 17.3” Full HD 1080p panel. Also returning, but with a notable new feature, is the backlit chiklet island style keyboard. RGB lighting is often used for higher price point models, but Asus is removing that restriction by adding it into the GL702M and is more than likely the culprit for the extra hike on the price tag.

I enjoy the 15+ million colour spectrum as much as any other lighting enthusiast but I don’t believe this addition is necessary or thought out. The rest of the GL753’s body doesn’t feature any RGB capability, leaving fans, accent pieces and logos the standard ROG orange. Since I always build around a certain colour profile this left me feeling that I still had to contrast off the orange in an appealing way, and limited how far I really wanted to explore the range I can get out of the machine.

When it comes to multimedia functionality the GL753 features everything a user could possibly need. An optical Blu-ray drive, Ethernet port, HDMI, and a host of USB 2.0 ports as well as one USB 3.0 port are onboard. There is an included 720p webcam on top of the panel, but I would rather pick out an external because this is definitely the weakest part of the package. Thankfully the speakers are good quality, delivering all of the impact and oomph that users expect from their favourite titles.

The STRIX name carries a lot of weight with it, ensuring excellent cooling while never compromising on powerful components. It’s no surprise then, with such a lineage, that the GL753 features a quad-core 7th Generation i7 Intel processor partnered with the latest 10-series NVIDIA desktop GPU, the GTX 1050 Ti. The 1050 Ti may be coming out as the lackluster ending for the 10-series GPU’s, but the card still has spunk where it counts and is a great inclusion for 1080p limited notebooks. Featuring 768 cuda cores, 4GB of GDDR5 memory and a clock speed of 1290 MHz, this card is incredibly efficient and is powered just by the PCIE slot on the motherboard.

To benchmark the GL753 I ran three lengthy tests: 3D Mark’s latest Time Spy benchmark, a 20 loop stress test of the classic Fire Strike, and rounded out the machines expected performance with a fully discharged battery in PC Mark 8. The partnership of the i7-7700HQ and the GTX 1050 Ti resulted in a rather lackluster score of 1479 in 3D Mark’s tests. The reason for this being that the 1050 Ti is not a particularly powerful GPU. While the card will run any modern title with ease at high settings with stable 30 FPS thanks to its Pascal-based architecture, this graphics card is really just a boosted version of the GTX 960 and is similar in power to AMD’s R9 380. Users who prefer to play eSports titles will have nothing to worry about with the GTX 1050 Ti since titles including Overwatch, DOTA 2, and Rocket League all perform at over 60 FPS on Ultra settings. However I expected something with more power in this notebook. Thanks to the GL753’s heftier weight, compared to the GL702M, I was expecting a return of the GTX 1060, which would have provided a 30 per cent increase in raw power. Lastly, this is not a VR intended card and does not pass Steam VR’s minimum benchmark.

Even for consumers anxious to pick up a new gaming notebook, I don’t believe this is the best on the market currently. With last year’s models going on flash sales while still featuring more raw horsepower underneath, the GL753 is relying on RGB lighting to be the star feature to sell it. I feel the inclusion has actually harmed me from giving a hearty recommendation because the machine is hitting at a higher price bracket then it can handle. With a majority of GTX 1050 Ti machines knocking at the $1000 price brackets door, Asus has become an outlier that consumers may quickly forget from considering in this race.

Editor’s Note: Asus also released the STRIX GL502VT which offers the same hardware with a 15 inch screen. Though a little more compact, performance wise, it is comparable to the STRIX GL753.

The STRIX GL753 Gaming Notebook is a consistently efficient machine that delivers good performance, but a heftier price tag than other competitors has made this notebook an outlier in the discussion.