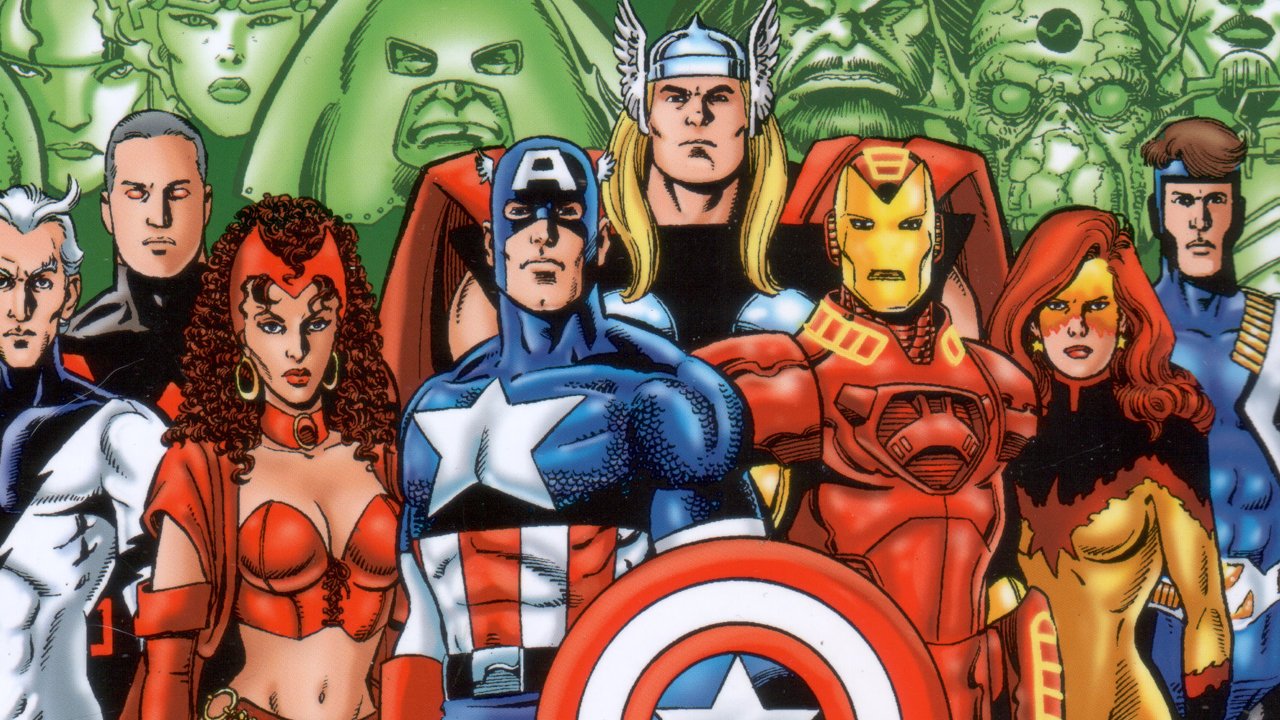 This new volume of Avengers Assemble continues to collect Kurt Busiek’s run on Avengers, collecting Avengers #24-34, Annual 2000 as well as Thunderbolts #42-#44.  The first two years of Busiek/Perez’s run on Avengers was incredibly strong, with memorable storylines with Ultron, the Squadron Supreme, Wonder Man and Vision, etc.  This collection, which features the Avengers’ adventures during the third year of Busiek/Perez’s tenure, isn’t quite as solid as the first two years, as the Avengers go through a tumultuous period in their membership.

Whereas the Avengers roster utilized in the first two Avengers Assemble collections was fairly classic and iconic, the team which dominates this collection is made up of Iron Man, Goliath, Wasp, She-Hulk, Triathlon, Warbird and Scarlet Witch.  Busiek built up the Triune Understanding as a major threat to the Avengers during his tenure, with this collection showing just how the Triune Understanding was able to undermine the overall effectiveness of the team, and put them into the public spotlight in a very negative manner.  The first few issues focus on the threat of the Exemplars, as Juggernaut finds himself on the run from various beings of power similar to his, who want their revenge on him, so he seeks out the Avengers for protection.  The storyline fails to really grab the reader’s full attention, as the Exemplars aren’t the greatest characters, they’re powerful ciphers with little personality or background to them.  From there, Captain America quits the team, leading into a fun issue where Warbird, Ant-Man II, Captain Marvel and Silverclaw are recruited by “Captain America”, who turns out to be Taskmaster in disguise.  It’s a fun romp of an issue, which has bigger ramifications for the Avengers themselves, which prompts the team’s roster to change, as Justice, Firestar and Thor exit the team, with Triathlon, Warbird, She-Hulk, Goliath and Wasp replacing them.

The middle of the collection sags as well, as Kulan Gath menaces the team.  The combination of an odd Avengers line-up and a mediocre villain doesn’t result in the most memorable of adventures for the team.  But thankfully, the rest of the collection is quite strong, as Busiek’s Avengers team-up with Fabian Nicieza and Mark Bagley’s Thunderbolts for a crossover involving Wonder Man, Atlas and Count Nefaria.  The storyline is a very strong one, as the two teams work together for once, instead of being at each other’s throats.  Count Nefaria is a very strong villain, when written and utilized correctly, and that’s just how he’s used here.  He’s powerful, strong, and the adventure involving him is an epic highpoint for Busiek’s tenure on Avengers.

George Perez handles the artwork throughout Busiek’s issues, and for the most part it’s very strong material.  That being said, when the Thunderbolts crossover occurs, his artwork gets ratcheted up a few notches, making his artwork in the first half of the collection pale in comparison.  Mark Bagley’s work on the Thunderbolts issues of the crossover is incredibly strong as well, a nice complement to Perez’s artwork on the Avengers issues.

Despite the overall level of quality not being what it was during the first two years of his tenure, Busiek still manages to tell some engaging and interesting stories here in this collection, his collaboration with Nicieza being a particular high-point.  Overall, there’s a high level of quality and excellence to be found in Busiek’s run on Avengers, particularly during his collaboration with George Perez, and so this collection is not to be missed.  If you’re looking for classic Avengers action, Busiek/Perez’s take on the Avengers is worth checking out.

Overall, there’s a high level of quality and excellence to be found in Busiek’s run on Avengers, so this collection is not to be missed.