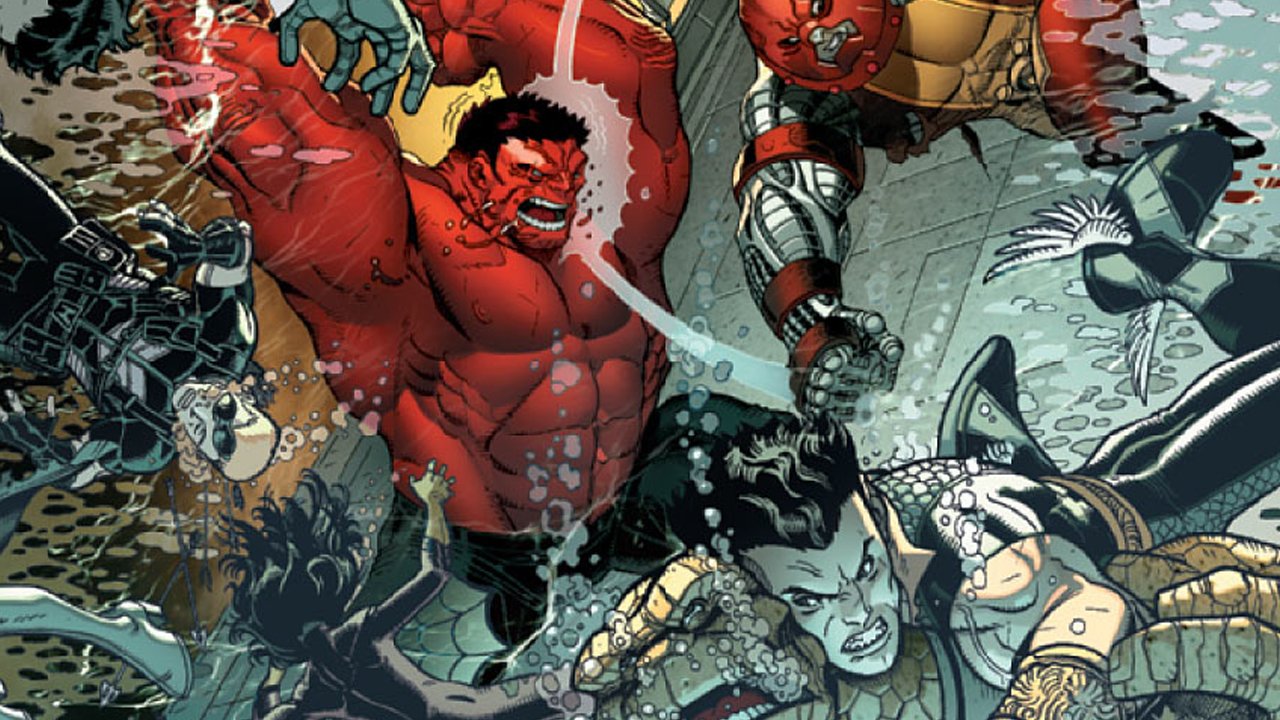 Over the past few years, whenever a big crossover storyline has launched from either DC or Marvel Comics, there has been a propensity towards spending the first few months doing nothing but build-up, and then fumbling the climax a bit.  I have to give Marvel credit though, after one issue to set-up the various conflicts in this story, this issue gets out of its own way, and just lets it all play out as one would expect.  This series isn’t pretending to be anything but what it says in its title, and that’s a good thing.  This is a storyline featuring Marvel’s two biggest franchises coming together for one heck of a throwdown, and this issue certainly did not disappoint.

Jason Aaron picks up the writing baton for this issue, and he delivers a fast-paced, suspenseful script, which has the two teams engaging in a massive battle with each other.  Marvel has historically been hit or miss with its crossover-tie-ins over the past few years, with its assorted Frontline mini-series being either very good or very bad, but this year they actually have a great idea, which is to spin off the biggest fights from this issue into its own mini-series, devoting more time to the fights that are only briefly shown here in these pages.  I love that idea, because it gives the reader the choice and opportunity to pay more to follow certain fights, and see them expanded, without slowing down the momentum in the main series.  It helps keep this issue on-point and well-paced.

Although the main focal point of this issue is on the Avengers coming to Utopia to try and take Hope into protective custody, only to end up fighting the X-Men, there’s more going on in the storyline, namely the approaching Phoenix Force, and I’m extremely happy that Aaron ended the fight, for the moment, and turned his attention back to the stars.  Back during Secret Invasion, a criticism of that storyline was that the story moved too slowly in some scenes, such as having many issues take place in the Savage Land, instead of moving the story and pacing more briskly, but thankfully Aaron seems to have been the right writer to not just handle the character moments throughout this issue’s fight sequences, but also give this phase of the storyline an end, of sorts, so that next issue’s writer could take the storyline in its next natural direction.

Although the writing was superior in this issue, the artwork remained at the same overall level, which is good or bad depending on how the reader enjoys John Romita Jr.’s artwork.  Personally, I feel that this isn’t his best work, and can’t wait to see a new artist take on this series, and give the book their own artistic spin on things.  Romita’s artwork seems to either be too thin and spindly, or too thick and fat, in terms of his lines and character designs, and in the case of this issue it’s the former.  I know that Cyclops is called “Slim”, but the visual interpretation of the character just doesn’t feel right here.  Some of the artwork here is very on-point, but it’s wildly inconsistent, which at times is more frustrating than the issues being consistently good or consistently bad.

This issue gave readers exactly what it promised, as the Avengers fought the X-Men, and Aaron was able to take the fighting and tell some important character moments in the limited space provided, as Cyclops fights to protect his people, and what he thinks is the best for them, as the Avengers try to do what they can to protect the world.  I’m looking forward to another artist handling this book, but I’ll be sad to see another writer take on the  book, as I was impressed with Jason Aaron’s handling of this issue.

I’m looking forward to another artist handling this book, but I’ll be sad to see another writer take on the book, as I was impressed with Jason Aaron’s handling of this issue.