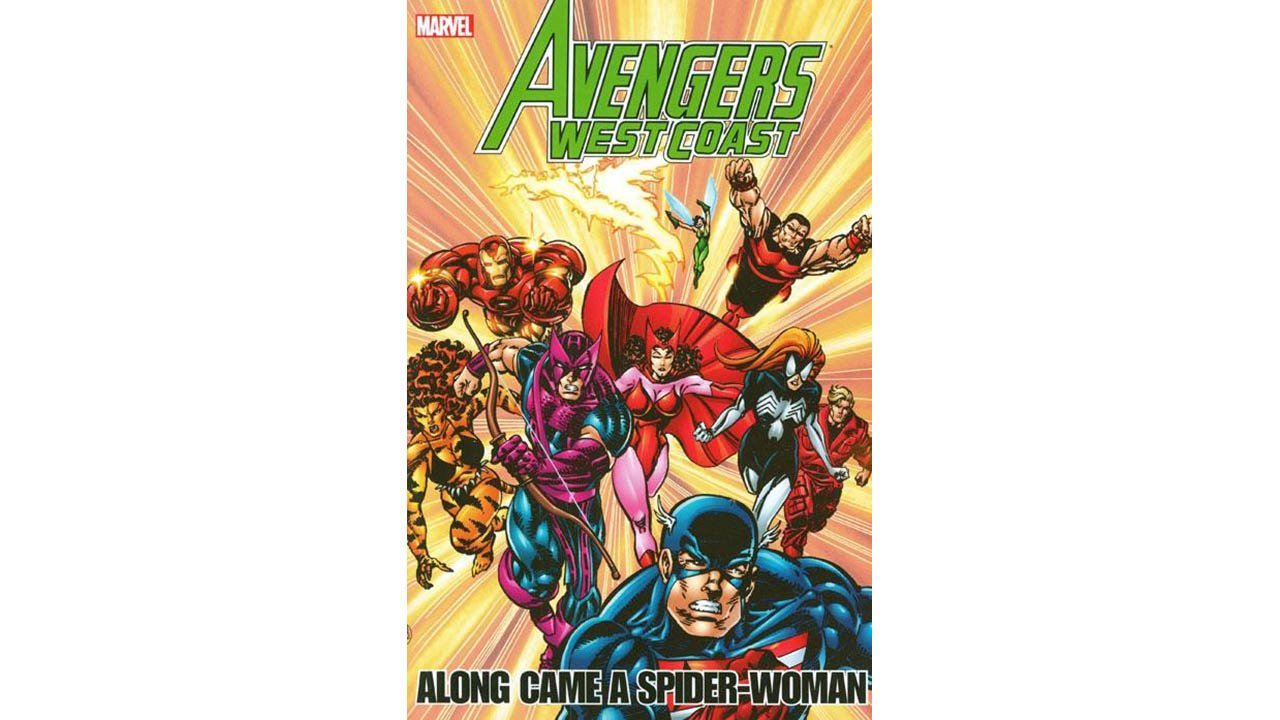 Over the last few years, Marvel has put out a variety of trade paperbacks collecting the adventures of Avengers West Coast / West Coast Avengers, with most of the trades starting with the formation of the team/start of the series, and moving forwards from there.  But back when they were first being published, Marvel put out two AWC tpbs collecting John Byrne’s tenure on the team, which took place in the middle of AWC’s run.  This new collection, Along Came A Spider-Woman, collects issues #58-59 (not included in the prior collections) and issues #63-75, finding the team and the title in a state of transition.  Byrne’s departure from the book doesn’t feel organic or natural, and as a result the book floundered a bit, and tried to find its new voice and direction.  As a result, this is an interesting collection of stories, ranging from the very enjoyable to the downright painful to read.

The first two issues in this collection comprise issues #58-59 of AWC, and were omitted from the prior collection of the title as they weren’t written or drawn by John Byrne.  The first is a mess of an issue, as the Avengers deal with suddenly being back on Earth, after issue #57, and go about trying to stop an Earthquake-causing villain.  #58 deals with the team tangling with a smarter and more powerful Hydro-Man, although by the end of the issue it’s unclear if the events of the issue happened at all, thanks to the intervention of Immortus.  From there, the collection jumps ahead to issue #63, which is after John Byrne’s final storyline dealing with the Scarlet Witch, Immortus and Magneto.

It’s clear from the issues running from #63-75 that new writers Roy and Dann Thomas were trying desperately to figure out what to do with these characters.  Iron Man had just returned to the team, but as a result of his own book, he had to pretend that the original Iron Man pilot had died, and that he was the replacement (despite the fact he was still Tony Stark behind the mask).  It’s awkward in the script, as he has to flat-out deny to his former friends and confidants in the Avengers that he’s now someone new and different.  Tigra starts the collection in a more feral state, and then becomes fixed off-panel (a story occurred elsewhere but not reprinted here) by Agatha Harkness, becoming newly confident and comfortable with herself.  Wanda deals with the loss of her children, as well as her hex power, Hawkeye deals with not being the leader of the team, as well as the absence of his wife, Mockingbird, Wasp and Hank Pym deal with the oddities of their own potential relationship, and US Agent deals with no one wanting him on the team, as he was forced onto the team by the US Government.  These are great characters, but they were in various states of transition, not working well as a team, and Roy and Dann Thomas didn’t seem to know how to characterize them as a result.  The villains used in this collection help demonstrate how they were struggling for good villains, as after having Grim Reaper return, as well as Ultron-13, there’s Cybertooth and Jawbreaker, not to mention the always embarrassing Arkon.  That all being said, there’s an inherent charm in this book, which was originally a quirky Avengers book on the West Coast, as it deals with its own issues with a sense of identity.  This wasn’t the main Avengers book, and that enabled Roy and Dann Thomas to be more experimental with the book, and do storylines they might not have done in the main book.  The introduction of Spider-Woman provides a boost to the team, as they seemed to find their voice in this character who was more or less a blank slate at this point in time.  US Agent also got more interesting as the series continued, although initially the character oscillated between being a bit of a thug, and showing more of the qualities that he originally showed when he served his tenure as Captain America.

The artwork in this collection is a bit all over the place, which makes sense as the book was coming off of a stretch where John Byrne had been the regular artist/writer.  David Ross and Paul Ryan are the standout artists from this collection, as they have a strong artistic sensibility, which fit in line with the Marvel house style that seems to have been in-effect at this point in time.  Sadly, the first issue in this collection by Tom Morgan was one of the weakest I’ve seen in some time, with the villain wearing a visor that reminded me greatly of the punks in Frank Miller’s Dark Knight Returns, which is not a good thing in the slightest.

This isn’t the strongest collection of Avengers stories, but for fans of Avengers West Coast, it’s an important read, as it charts the evolution of the team during a time when it lost its rudder, and struggled to plot a new course.  I’m glad that Marvel remains committed to reprinting Avengers West Coast, and look forward to future collections to help put the entirety of the series in print, as the later issues in this series have never seen reprinting (aside from the chapters that played a part in both the X-Men/Avengers: Bloodties and Avengers: Operation Galactic Storm storylines).