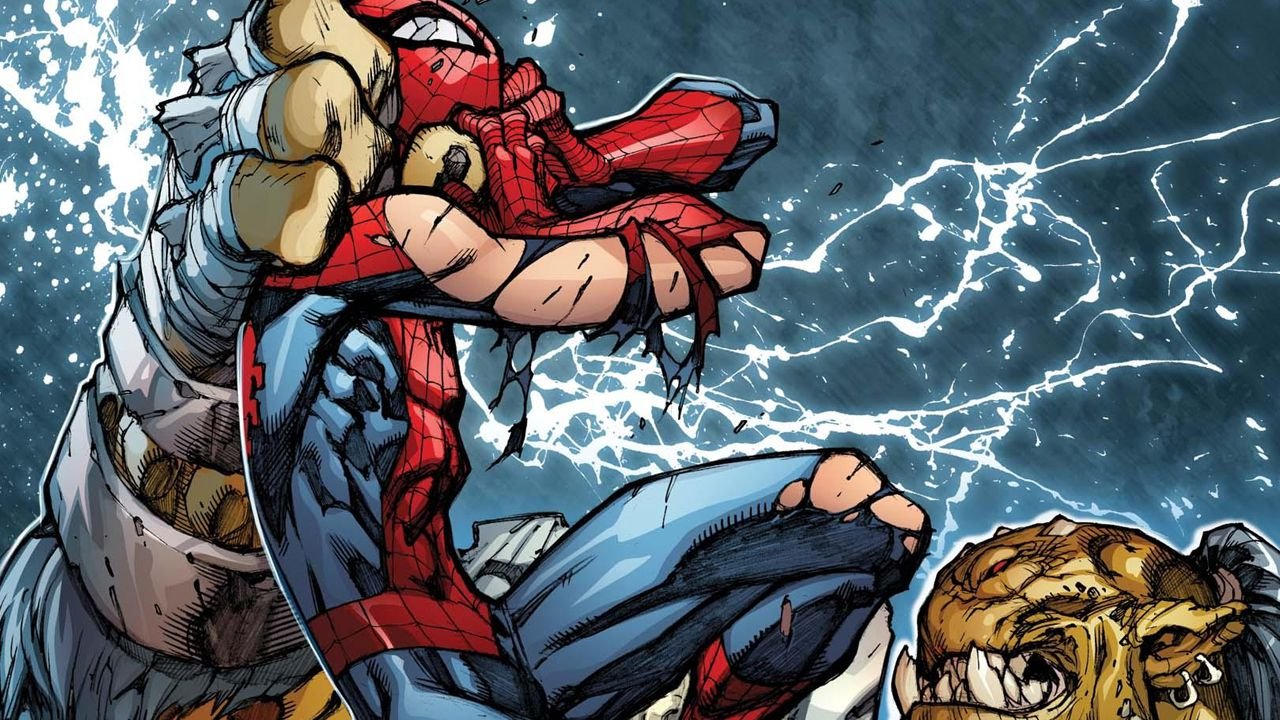 This issue concludes the first arc of Avenging Spider-Man, bringing the team-up between Spider-Man and Red Hulk to a close. Unfortunately, this issue isn’t nearly as strong or as enjoyable as the first two, although it’s still a relatively good read. Last issue had a great cliffhanger, but what dragged this issue down was Wells’ overused dialogue with Jameson and Spider-Man. Writing their banter can be a tricky thing, because Jameson can at times be written very over-the-top, which is exactly what happened here in this issue. In small doses, it works fairly well, but this issue featured more of it than I would have liked, because it made the issue’s pacing slow to a crawl, instead of focusing on the fun action and adventure which made the first two issues so enjoyable.

With Red Hulk down, seemingly dead, Spider-Man tries to save Jameson’s life, while also trying to go back and save Red Hulk, save Mole Man, and find a way to stop the Moloid leader. The actual fight that Spider-Man ends up having with the leader of the Moloids is okay, but not the most exciting, and the manner in which the story is then resolved felt a little too easy, and almost silly. I get what Zeb Wells was going for with it, but in practice it felt contrived. Red Hulk’s struggle to get up and back into the fight was enjoyable, because it was a nice use of characterization for General Ross. What makes Red Hulk an interesting character to read these days is how writers use Ross’ history as a military man to make his time spent as Hulk more meaningful and impactful than Banner’s version of Hulk is able to effect. Whereas Green Hulk is more often than not an engine of destruction and mindless rage, seeing a smarter, more tactical version of a Hulk is a fun toy for writers to play with, as Ross gets more and more comfortable with being the superpowered Red Hulk.

The artwork by Joe Madureira continues to impress, as his style goes through some minor changes. When he first returned to comics in a big way a few years ago with Ultimates 3, his work was far leaner, and now as he does more work for Marvel Comics, we’re seeing a return in style to how some of his work looked back in the ‘90s when he shot to fame as artist on Uncanny X-Men. His portrayal of the armoured up Moloids and J. Jonah Jameson in particular help to evoke that particular style and sensibility in the artwork. That being said, his artistic portrayal of Spider-Man isn’t always the most consistent, as he goes from a larger body-type to a more lithe and tiny body-type between pages, and can make the overall reading experience a little more disjointed. The final battle between Spider-Man and the Moloid leader could have been a bit more concise and easy to follow as well.

This title overall is a nice addition to the Spider-Man line, essentially giving Spider-Man a modern version of Marvel Team-Up, smartly pairing him up with his fellow Avengers to tell stories that are set in current continuity, but don’t quite fit into the regular narrative of Amazing Spider-Man, the flagship Spider-Man book. This issue is still an okay read, although not as strong as the two issues that preceded it in the storyline. I’m looking forward to what Zeb Wells brings to the title and character in the future, as well as the potential in seeing team-ups that are new and allow for characterization between Spider-Man and characters he doesn’t usually get to play off against in a one-on-one setting.

Avenging Spider-Man 3 is still an okay read, although not as strong as the two issues that preceded it in the storyline.