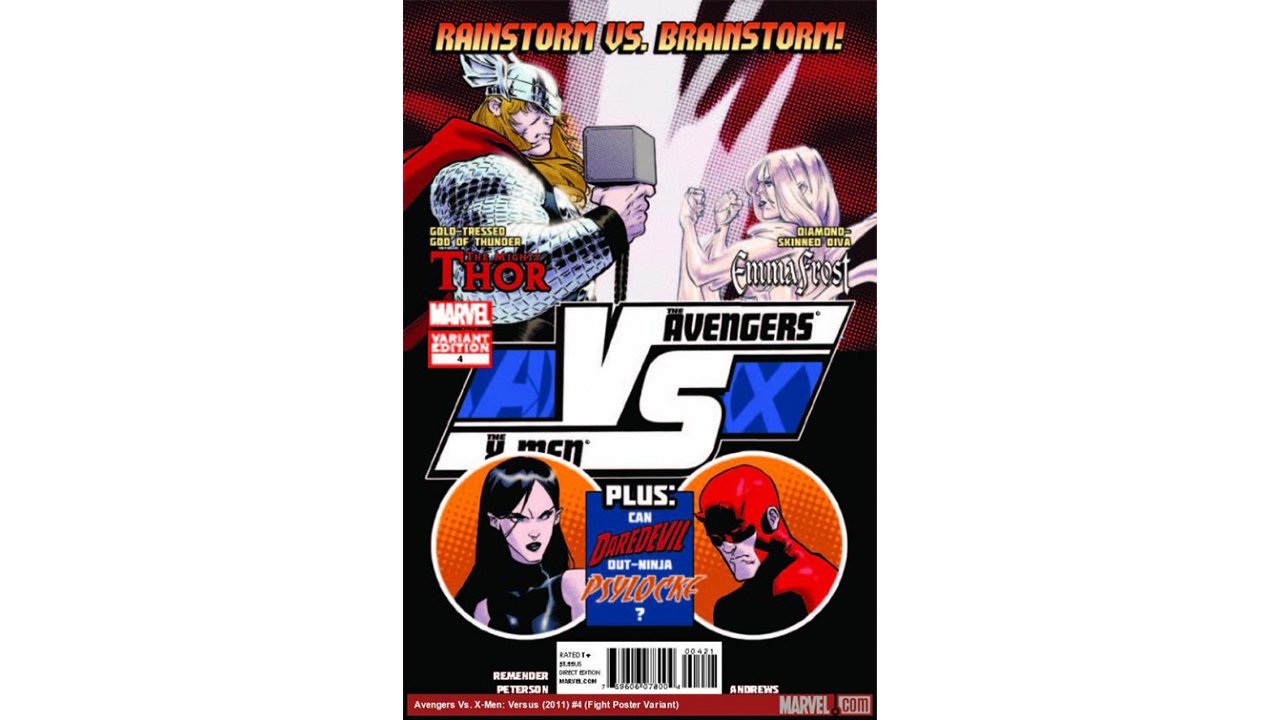 This new issue of AVX VS is perhaps my favourite issue to date of the series, as it features Daredevil taking on Psylocke, as well as Thor taking on Emma Frost.  The series remains a good deal of fun, as it focuses on the fun of seeing two comic book characters slug it out, without worrying about the story that pits the two characters against one another.  This series is a great example of a popcorn comic, it’s just hoping to entertain readers with big action, and this issue definitely succeeds.

The first story in this issue has Daredevil taking on Psylocke, and it’s a fantastically enjoyable fight sequence, which really speaks to the root of what makes both characters fun to read about.  They’re both highly  trained ninjas, both have connections to The Hand, and their fight is so much fun because Rick Remender doesn’t shy away from really exploring the potential of their fight to its fullest.  At first blush, this may seem like an easy fight, because of Psylocke’s telepathy, but Remender comes up with a good reason why it doesn’t play a huge part in the fight sequence, allowing the rest of the fight to remain a hand-to-hand battle royale.  Brandon Peterson is not the artist that I would have chosen to illustrate this particular fight, as I haven’t always been that impressed with how he captures movement and fluidity in his panels, but he does a a surprisingly strong job here, with crisp, detailed artwork. He does use a lot of motion lines, in a way that reminds me of Gene Colan and similar artists, and it works really well in this context, although again I would not have expected it to work this well.  I usually equate Peterson’s work with science fiction, as he has done in the past, but he really nails the down-to-earth nature of this particular fight.

The second story in the issue focuses on Thor fighting a Phoenix-empowered Emma Frost, and it’s an extremely enjoyable issue, not just because of the script by Kaare Andrews, but also because of his breathtaking artwork.  At times it almost reminds me of Chris Bachalo, but a bit more restrained and not as crazy with linework.  I really loved the different perspectives that Andrews uses in this issue, taking unconventional framing and really making it work. Many shots here are quite different than the typical panel composition would give you, and it makes the artwork here really standout.  The fight is quite well-thought-out as well, and Andrews illustrates the hell out of his own script.

Once again this title doesn’t fail to entertain, with some great artwork accompanying some fantastic scripts.  I’m really looking forward to the next set of versus battles, to see what else Marvel has in store for us readers.

Once again AVX VS 4 doesn’t fail to entertain, with some great artwork accompanying some fantastic scripts.