Back To The Future: An Adventure Through Time (Boardgame) Review 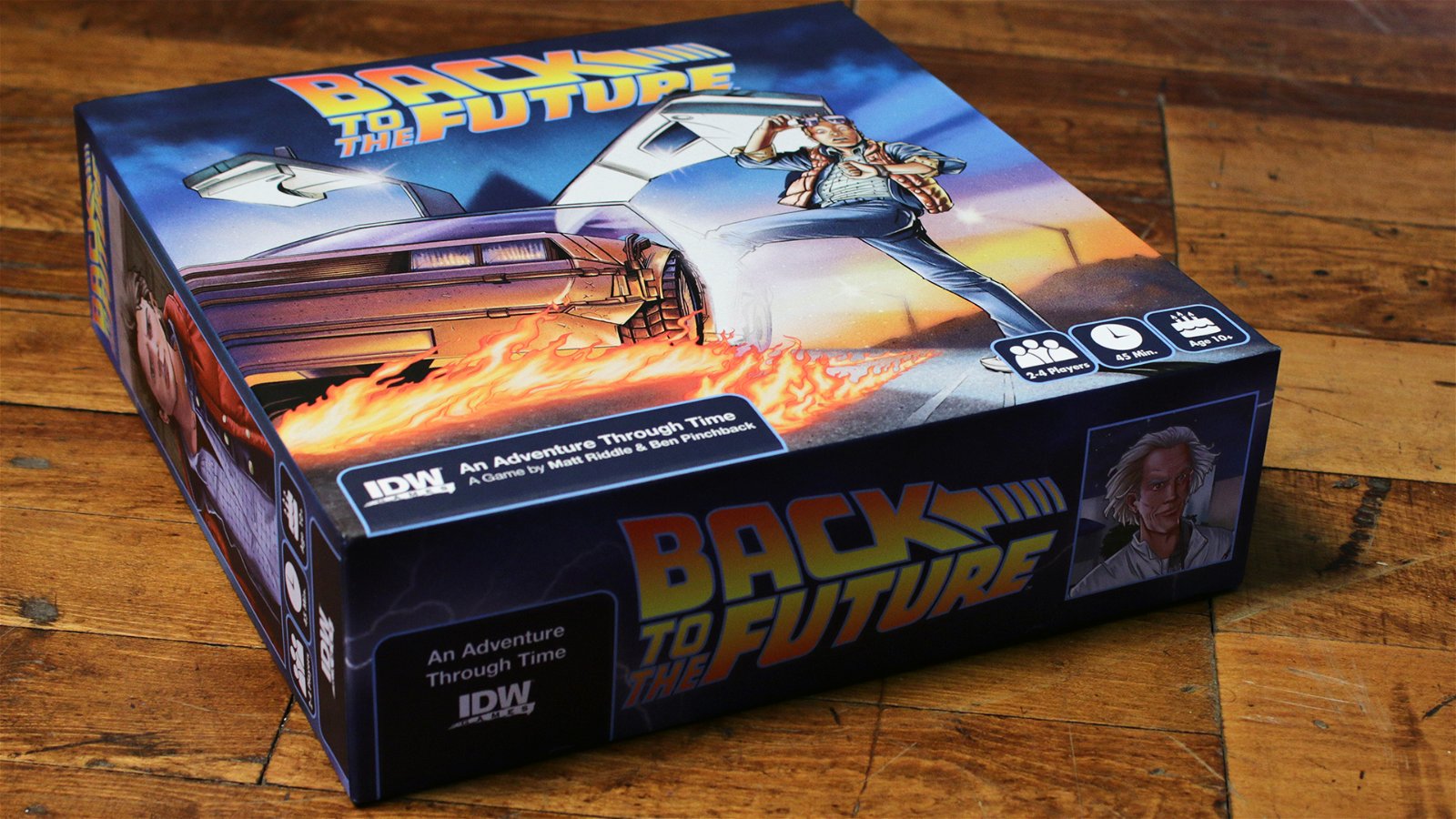 Few fantasies from the 80s have managed to endure like Back To The Future. The simple tale of a skateboarding teen who likes to hang out with an elderly man and travels back in time where his mother attempts to seduce him (yeah…it’s a weird one) instantly made a mark on pop culture that hasn’t diluted since. A few years ago we even caught up to the fictional future depicted in the sequel and somehow the franchise remained just as beloved despite our distinct lack of flying cars in 2015. Back To The Future remains so loved that it’s been splattered across every conceivable form of merchandising in the hopes of seducing the fans into giving over a little more money to the cause. The latest form of Back To The Future paraphernalia is a time-travelin’ card game from IDW. Before you throw your hands into the air and scream, “Why?!” it’s worth noting that the game is actually rather fun. Is it as good as the movies? Don’t be ridiculous; but it was clearly made by fans with a deep love and affection for the franchise, so that certainly counts for something.

Designed by Ben Pinchback and Matt Riddle, Back To The Future: An Adventure Through Time is designed to capitalize on all the timeline snafus that resulted from Doc and Marty’s adventures through time. It’s certainly a complex game. I have to admit it took quite a while to simply wrap my head around the rules (to be fair to the designers, I am a dummy. So it’s not entirely their fault) so I won’t dare to attempt to explain them in detail. In broad strokes, it’s all based around hopping between 1955, 1985, and 2015 (the 1885 timeline from Back To The Future III was conveniently left out for expansion pack possibilities). Players will move a Delorean between time zones and attempt to play character cards dedicated to all of the most iconic Back To The Future characters to complete events. Unfortunately, players aren’t just competing against each other to complete events first, but also the time continuum requiring debts to be paid for ripples in. Classic characters also all have specific gameplay abilities (Biff steals cards, obviously) and it’s kind of amazing how much each and every character card can accomplish in gameplay.

If that sounds a little confusing or vague, I assure you that’s only because it takes a while to wrap your head around the rules of this game. There’s no board. There are only cards and tokens of various shapes and sizes. It’s hard to make sense of it at first, but once you finally get the hang of the game it becomes rather fun and addictive. There are so many variables baked into to the game design that it’s impossible any two games of Back To The Future: An Adventure Through Time will be the same. Provided you can communicate the rules to a group, it plays just as well between two players and up to four. More importantly, the game is designed to suit the pop culture property branded all over it and not the other way around. This doesn’t feel like a clone with Doc and Marty painted on top. It’s a unique game designed to suit the time travel shenanigans of Back To The Future. Were it not for the fact that the characters and world are so familiar, it would be even more difficult to tell what the hell is happening during a game.

Even though the game is comprised exclusively of squares of cardboard of various sizes, artist Andy Parisi beautifully designs it. The likenesses of the characters are all instantly identifiable (while also being slightly stylized to avoid any law suits). The expressions chosen and scenes recreated on the cards will make any fan of the series feel nostalgic. All the characters also fit into the gameplay structure rather well in ways that suit who they were in the movies (with the exception of Jennifer, whose power in the game is that she can sub in for any other character, which I guess is an amusing comment on her lack of defined personality and the casting change between sequels. But more likely than not it’s a result of the designers not knowing what to do with her). The designs of Hill Valley and the Delorean are on point for long time fans while still suiting a stylized comic book aesthetic. There’s also a free issue of IDW’s Back To The Future comic book series included. The story is co-written by series creator Bob Gale (no Robert Zemeckis though, since he has that pesky filmmaking career keeping him busy) the art looks like the game and it’s actually rather charming in a fanfic kind of way. There’s no denying the book was only shoved in there for cross-marketing purposes, but the comic is so fun and on-brand that it’ll be a pleasant surprise for fans.

And really, that’s all who matters with this sort of thing. Let’s face it; Back To The Future: An Adventure Through Time only exists as an act of fan service. No one is going to pick it up other than Back To The Future fans and it’s unlikely they’ll walk away disappointed. Sure, the game is frustratingly complex to learn (the confusing instruction manual written in a haphazard order doesn’t help). But once you get the hang of it, the game is undeniably fun to play and suits the brand well. Sure, it’s not perfect and it’s unlikely to win over players who aren’t already onboard with the idea of a Back To The Future game. However, if you feel like wrapping your brain around some time travel puzzles, playing around with old characters who feel like friends, and adding your own quote-a-thon with bad Back To The Future impressions to the proceedings, there’s definitely fun to be had here. Generally speaking, licenced games are disposable distractions for die-hard fanboys and girls. Back To The Future: An Adventure Through Time is very much that, yet it’s also a distraction that you’ll find yourself revisiting for gameplay and not just 80’s nostalgia. That’s really all you can ask for with something like this, so bravo. It only took 32 years, but someone actually made a Back To The Future tabletop game worth playing.

A rather amusing card game take on Back to the Future with plenty of personality and brainbusting time travel contortions. 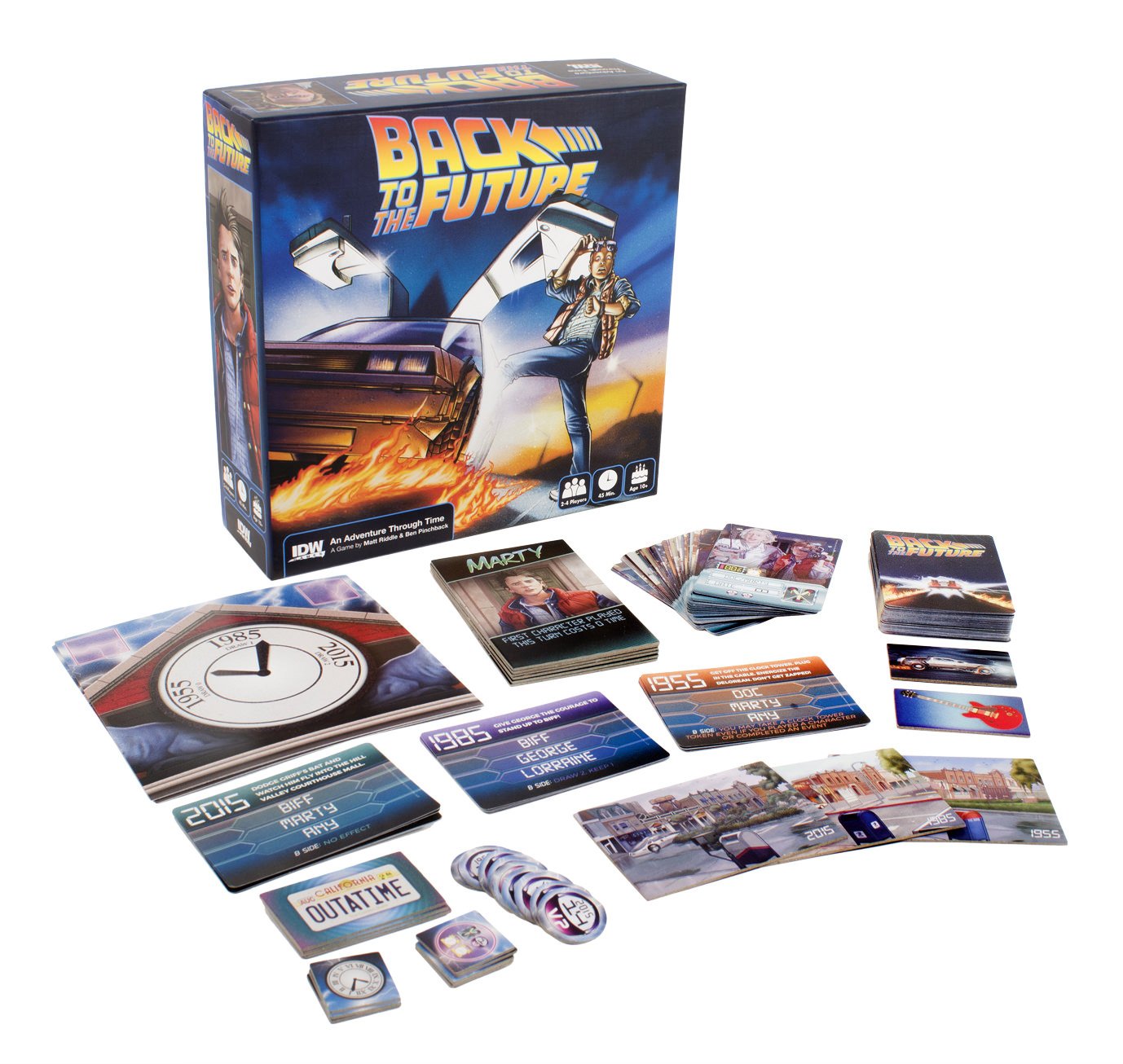