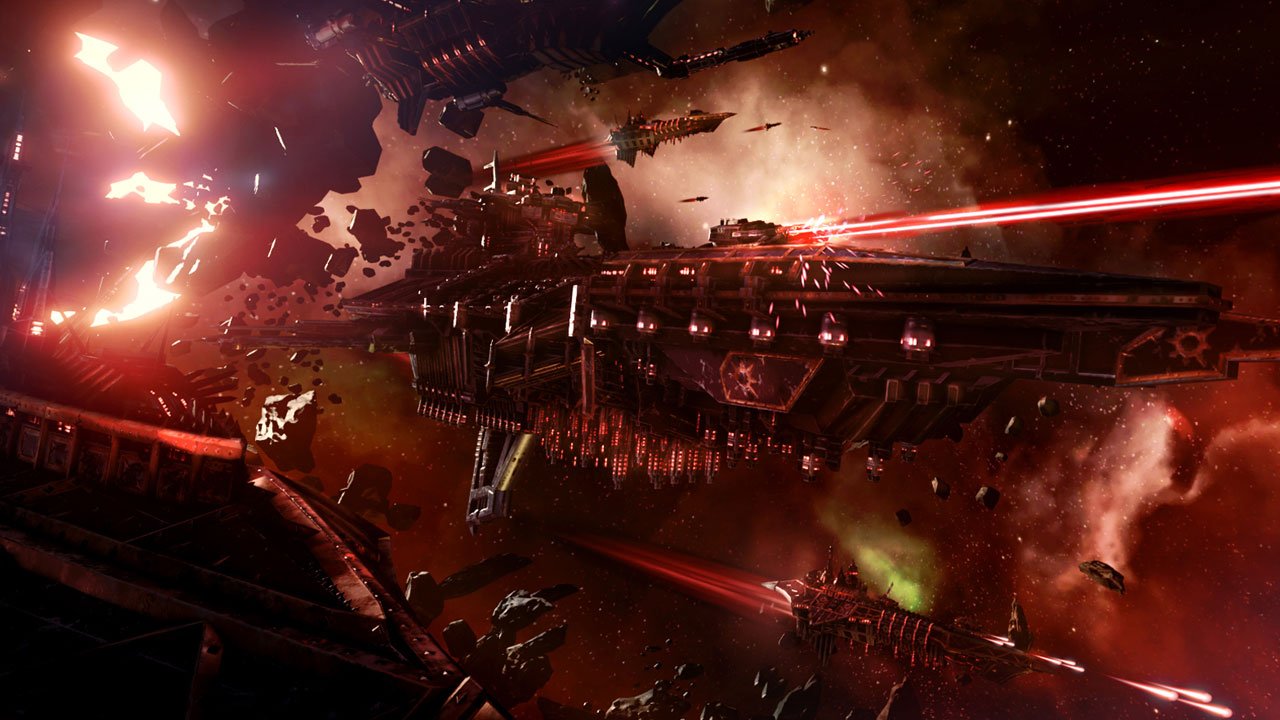 Let me get this out of the way so as not to be strung up by the veteran Warhammer 40K fans later on. I'm still pretty green to the Warhammer universe and my knowledge of the lore is limited but growing. That said when I first heard about Battlefleet Gothic: Armada, I was intrigued. I've delved into other Warhammer games such as 40K: Space Marine, a couple Dawn of War games and spent a fair amount of time in Vermintide and I became a quick fan of everything Warhammer. After playing Armada, I'm now ready to command my own Emperor-class battleship, seek out the heretics and crush them in the name of the Emperor!

I'll just put it this way: this game is awesome. There's just something so enjoyable about controlling battle ships the size of cities with cathedrals attached to them sent out to destroy other city-ships full of demons from another dimension, all in the defence of humanity.

Battlefleet Gothic: Armada is based on the tabletop miniatures game Battlefleet Gothic developed by Games Workshop back in 1999. The game is set in the 40K universe, which is a science fantasy universe where extreme dystopianism reigns and brutal wars rage through the cosmos. The Battlefleet Gothic story focuses on massive ship battles, mainly the Gothic War which saw many races battling for control of ancient weapons called Blackstone Fortresses inside the Gothic Sector of the Milky Way Galaxy. Gothic is also the name of an immense fleet of Imperial Navy vessels who were assigned to protect the Gothic Sector.

I could spend this whole review talking about 40K, but I have a game to talk about so let's get to it. Armada features a number of game modes players can choose from, including Campaign, Solo Skirmish, Custom Game and Multiplayer. When you finally decide how you want to blow up some spaceships, it's time to pick your race. Armada features four playable races who were involved in the Gothic War. They are: the Imperial Navy, the forces of Chaos, Ork Pirates, and the Eldar. Each race features their own advantages and disadvantages to battle, such as Imperial ships having strong prow armour or Ork Captains being the most likely to disobey.

Yes, your soldiers can turn against you. I'll get into that a little later.

The level of customization in this game is fairly deep and lost battles may encourage you to try different play styles for your ships. Your fleet consists of multiple different ships you can bring into battle, from colossal battleships to agile escort ships. Some of these ships, beginning with the Light Cruisers, gain experience and levels through battling. Leveling unlocks fancy things for your ship including upgrades, skills, and crew bonuses which will give your ships new weapons, increase their damage and shields, gain more troops, and much more. These are accessed through what's called Renown Points; they're basically this game's currency and are awarded to you after each battle, win or lose. Renown is used for everything I just listed and then some, including fixing destroyed ships. In the heat of battle, it's easy to make a mistake and this could end up costing you a ship or two. If one of your larger ships gets destroyed, you will either have to wait out the repair time or spend some Renown if you need it back right away.

This is why bringing the right ship for the right job is, what I feel, a pivotal role in Armada. The customization choices you make for your ship come into play pretty frequently and vary depending on the battle you're involved in. Say for instance the mission is to guard a space station. You'll probably want one of your ships to be pretty beefy and be the focus of attention for the enemy, so upgrading its defenses and putting skill points into better shielding would be a safe route to take. You'll also want to look at bringing a nimble ship capable of surprising or flanking the enemy, in which case that ship will have crowd control focus and better maneuvering capabilities.

The dark and terrifying void of the Gothic Sector is where the magic truly shines for Armada. You can only bring so many ships into a fight, so make sure you choose wisely. Armada is largely tactical in nature, being that it is real-time strategy, micro-management is crucial and the positioning of your ships can, in some cases, cost you a fight. Far too often I had the tide of battle turned against me just in the opening shots because my smaller ships were focused down or I was at a disadvantage in numbers. The combat effects are gorgeous to look at and you can tell an impressive amount of detail went into them. Try out the Lightning Strike or any of the bombs and you’ll see what I mean.

Another thing I came to notice is how much these giant ships act like, well, GIANT ships. Understandably, the bigger it is, the harder and slower it will be to maneuver. I have heard from fans of the tabletop version that the ships in Armada are way too maneuverable and this can devalue tactical positioning. By forcing the bigger ships into turning situations, you will have the advantage and should make use of your special weapons to deal a huge blow to them. Don't get too cocky, though. You could easily find yourself in the path of an enemy's bomb or an asteroid field and risk some serious damage or destruction.

Losing the battle is painful, and can happen any number of ways. As I mentioned before, your captains can turn on you, it doesn't happen often, but when one of your ships decides to mutiny you can almost feel the knife in your back. Of course, you have the option to execute the captain and regain control of the ship before it escapes through the Warp, but that more often than not could result in the loss of said ship. Retreating from battle is never an easy option to make, but sometimes it's the only one. If you feel like it's a lost cause, you can opt to make a jump through the Warp and end the battle, ensuring you don't lose any more ships but in turn surrendering the fight. I've had to do this more than I'm proud to mention, but I don't like watching my ships explode. You start to feel for them after a while.

I have a feeling Battlefleet: Gothic Armada is going to be a surprise hit with many people, even those who aren't too familiar with the setting. Games based on 40K have, a majority of the time, turned out to be pretty enjoyable, but at the same time it's very easy to screw them up. Tindalos Interactive have done what I feel to be an incredible job with Armada, balancing out aspects to gain the respect of loyal 40K fans while sparking the interest of new fans and curious gamers alike. The customization, enticing story, and gripping combat all come together to make Armada into an enjoyable and thought-provoking game that speaks to the war tactician inside me, judging every move I make and feeling like I was in charge of the fate of humanity. For the Emperor, indeed.

Final Thoughts
Armada is tactical, unforgiving and at times difficult, but incredibly fun and gives a great feeling of victory when things go your way. It's a side of 40K that I don't see explored that often, and it does so in an incredibly astonishing way.
More From CGMagazine 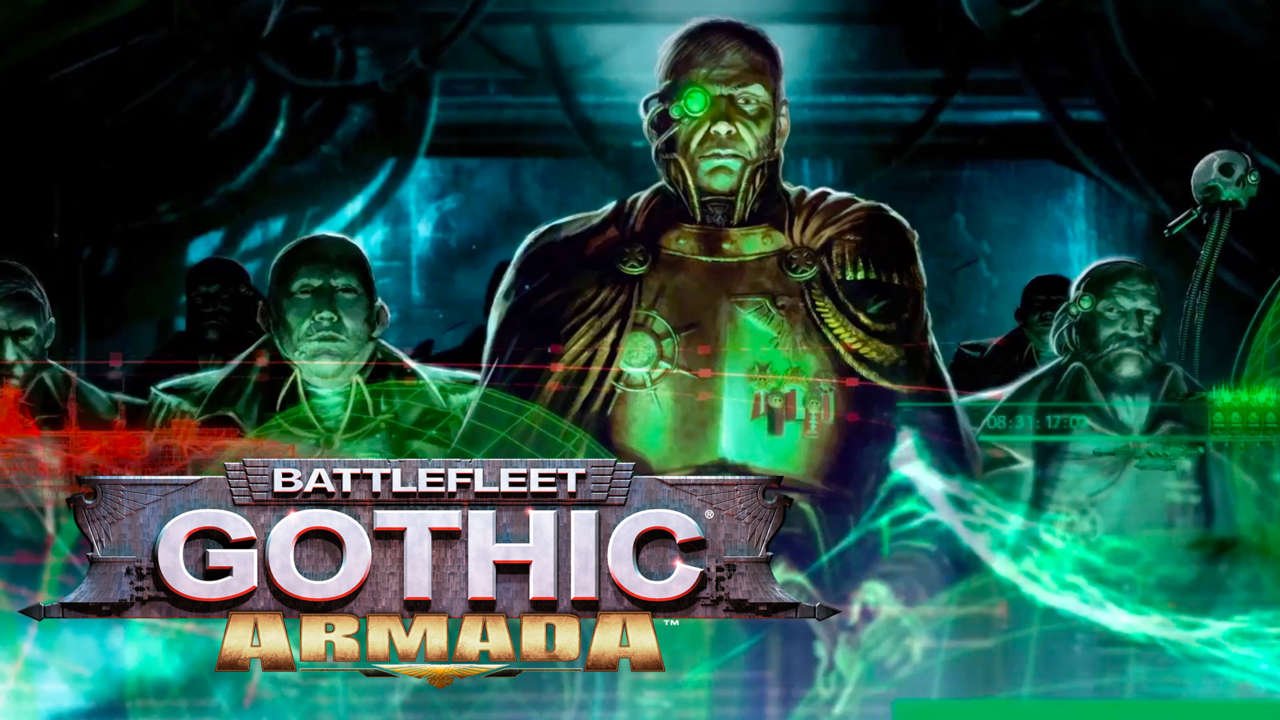