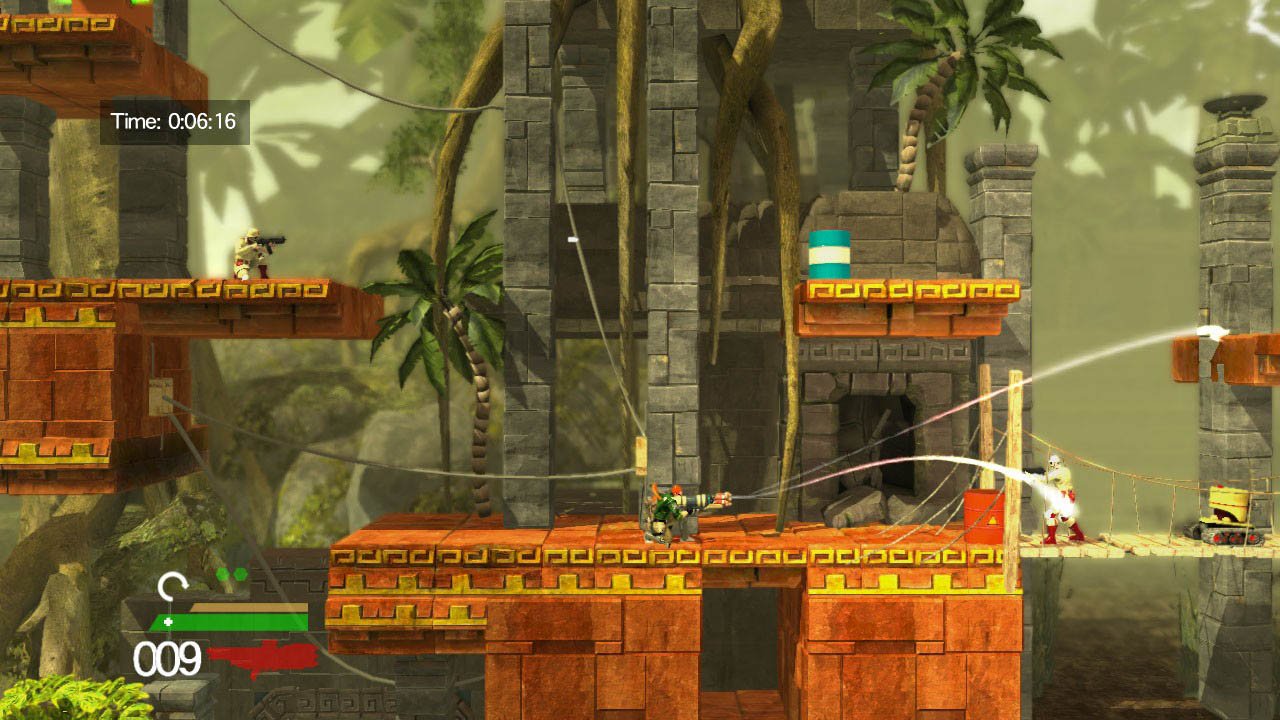 Has it really been close to three years since Bionic Commando Rearmed hit the downloadable game scene? The first game, a loving remake of the 1988 original, caught contemporary gamers by surprise with its loyal adherence to difficulty levels not seen in years. It was a labour of love that showed a fondness for the source material with knowing winks to the retro scene in its music and dialog. The sequel attempts to give us more of the same, though the final result is not quite the obvious triumph of its predecessor.

Nathan “Rad” Spencer is back, blitzkrieging his way through a stand in for Cuba and its leader, Fidel Castro. This time out, in yet another nod to 80s culture, the revered Colonel Brubaker is in trouble during his covert mission to the Papagayan Islands, and it’s up to Spencer and his elite unit of bionic commandos to rescue the imperilled officer. As to be expected, things go horribly wrong and it’s up to Rad, alone and cybernetically armed, to save the day. There are the expected twists and turns, with some cheesy dialog that walks the border between ironically self-aware of its retro/parody nature and genuinely bad writing. This being an action arcade platformer with no pretensions to high art, however, it doesn’t hurt the game in any way.

Fatshark, the developers of the game, are actually composed of refugees from GRIN, the original developers BCR2’s predecessor. As a result, it should come as no surprise that the original’s engine is on show here, with the same vibrant colors and detailed environments. Like the original, BCR2 manages to impress—at least by downloadable game standards—with a high quality of “2.5D” visuals. The Nvidia PhysX engine is also at work here, with bodies flying through the air in the wake of explosions and large buildings breaking up into satisfying pieces when it’s time to blow things up. The audio effects are also taken directly from BCR1, with, perhaps most importantly, a new collection of retro-style tunes to keep players firmly engaged with tongue-in-cheek 80s style. The music is actually the biggest highlight, with some DTS format, catchy, crafted tunes in the retro vein that make good use of the subwoofer for more elaborate audio set-ups that give some decent punch for players with the speakers to handle it. Overall there’s a lot of playful style in the retro-leanings of the game, with a lot to like for audiences that don’t demand photorealistic graphics or high fidelity sound.

The biggest point of contention with BCR2 is finally giving Rad the ability to jump. For years now, the Bionic Commando series has distinguished itself by this notable absence, forcing players to adapt to a new mechanic of swinging from place to place with mid-air acrobatics thrown in to change directions or traverse levels. Jumping, may be viewed by some as a blasphemy, but ultimately it detracts very little from the game as it just adds another option for those that want the Bionic Commando experience without all the controller hurling that would be involved from people that lack the patience to master the traditional system. The old system is still there, and there are actually rewards for people that stick with it, but for people that just want to get through the game, jumping now provides an opportunity, with new, less tumultuous alternative paths for those willing to jump their way over or into them. Completing the game unlocks a “hardcore mode” where jumping is disabled from the outset for the die hard purists. Other differences between this game and BCR1 include a linear path, a new collection of primary and secondary weapons for a variety of different effects, and an unfortunate habit recycling encounters, with two bosses making repeat—albeit tweaked for greater difficulty—appearances.

But all these new additions do not make the game a cakewalk to tempt casual gamers into the fold with excessive hand holding and encouragement. There’s still a retro level of challenge to the game, accompanied by some dramatic spikes in difficulty from time to time. Part of that is Fatshark’s freedom in being able to design levels as they see fit rather than being shackled to a remake of existing levels but the results are mixed at best. The new levels can occasionally sport complex layouts where the way to proceed is not clear at all, but the bottomless pits and booby traps scattered everywhere can discourage exploration. The boss fights can also be demanding, falling back on the old “trial by death” method of 8-bit games, with a lot of experimentation required to find the exact attack pattern and divine the mechanics required to make enemies vulnerable to attack. Even though the game now includes a “scan” function that players can use to garner clues about their environment, the hints provided often fail to illuminate proceedings beyond the obvious “Expose your enemy’s weakpoint” directive.

The controls for the actual swinging mechanic have been slightly tweaked, which may be off-putting to purists as they now feel different, but they still demand that same pixel perfect sense of navigation that brutal 8-bit games of the past have always had. It’s also recommended that, if possible, you play using the D-Pad of your controller, as the precision required in a 2D game is better suited, assuming your controller is up to the task. In general terms, this being a product of a retro design sensibility, expect what amounts to an “unfair” game by modern standards with cheap deaths, bottomless pits that result in one hit kills, and enemy placement that will demand nearly perfect playthroughs in order to successfully traverse some of the trickier level sections.

This is where BCR2 will divide the virtual men from the boys, much like its predecessor. It’s a hard game that asks a lot of the player. There’s actually an enormous wealth of content with hidden items and upgrades scattered throughout the levels, as well as the addition of local co-op and the return of the challenge rooms from the original, but this will require—even at normal levels of difficulty—quite a bit of effort on the part of gamers. For players that enjoyed the first, this is a safe buy, as its more of the same, but it doesn’t improve on the original in any way, and purists will balk at some of the changes implemented. For people that feel game have gone too easy on players of late, this might be just the antidote to get the blood boiling again.

There’s actually an enormous wealth of content with hidden items and upgrades scattered throughout the levels, as well as the addition of local co-op and the return of the challenge rooms from the original, but this will require—even at normal levels of difficulty—quite a bit of effort on the part of gamers. 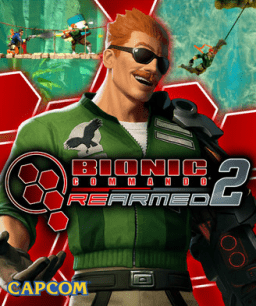